Some terrible fires are less accidental than others

Ah, hell. Crow Bar, the much-loved neighborhood pub at 3116 S. Congress, has been destroyed in a fire. 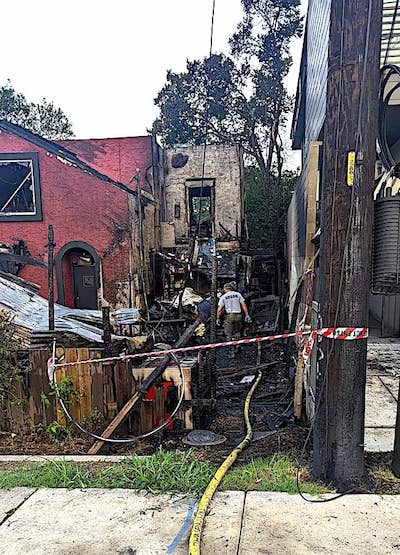 As reported by KVUE, Austin’s ABC affiliate, “Firefighters responded to a fire at Crow Bar around 4:20am on Sept. 18. Austin Fire Department stated in a tweet that crews determined the fire to be intentionally set.”

Some guy.
Some guy torched the place.

The KVUE report goes on: “John Adam Henry, 42, was arrested for intentionally setting the fire on 2728 S. Congress Avenue that occurred on Sunday morning. Investigators with AFD filed a probable cause affidavit for the charge of Felony 2 Arson.”

And so the arson investigation continues. Evidence being gathered and scrutinized. Ashes being sifted, structural damage being assessed. Due process, one hopes, being followed.

Nobody’s hanging out, drinking, jawing about what the weather’s like or how their day went. Nobody’s on the clock, serving up the local brews and craft cocktails, keeping everything smooth, working that hospitality vibe.

Which is why local bartender Aryn Black – he’s part owner of pizza powerhouse Sonny Chub’s Premium Pies, too – has set up a GoFundMe account to help Crow Bar staff displaced by the disaster.

We saw that in the In The Weeds group on Facebook, and –

Be that guy, we’ll suggest in a burst of frustration and sympathy.

In general, right? Be the guy who makes an effort to help, who takes the time and trouble to support their community, and not the guy who sets things on fire for who knows what fucked-up reason.

Crow Bar: Please come back, if it's at all possible. Maybe call yourself – as some wag on Reddit suggested – Phoenix Bar. But come on back like a corvid from hell, however you can, because your people already miss you.