Who Won the Cocktail Showdown at Hotel ZaZa?

Who combined spirited liquids the best to beat this murderous heat?

So, yeah, there was a seven-bartender Cocktail Showdown at Hotel ZaZa recently …

The idea was to see which of the canny mixologists (from all over town) could create the best drink for this summer, and each of them using a specific top-name brand of booze as they inflected their concoctions a little, well, a little Tikiwise, for want of a more precise term.

The idea, also, was that all proceeds from this event would go to the Central Texas Food Bank.

[Note: Hey – just like we do with proceeds from the annual Austin Chronicle Hot Sauce Festival.]

And, tell you what, the lineup of participants was no weak sauce. The lineup of champions for this spirited showdown was:

And so the action went down in a series of little alcohol-fueled pop-ups arrayed around the hotel’s seventh-floor outdoor pool on Thursday, August 4, the sun doing its demonic thing up there in the cloudless blue, the bartenders sweating handsomely as they plied their arcane trade for the enjoyment of all – and for the judgment of both the paying public and the official judges.

As reported in this week’s “Food News Buffet”, the winner was ZaZa’s own Demetrius Thomas, who conjured up the aptly named Heat Wave based on Bombay Sapphire gin.

[Note: While our personal favorite was the refreshalicious Three Hour Tour that Clive Bar’s Jake Finley built with Santa Teresa 1796, we thoroughly enjoyed that Heat Wave and will swear on a stack of Mr. Bostons that the boozy poolside brawl wasn’t rigged in favor of the hosting venue.]

And, ah, just what is this Heat Wave?
Oh, baby. It’s sooooooo good, but it takes some doing … 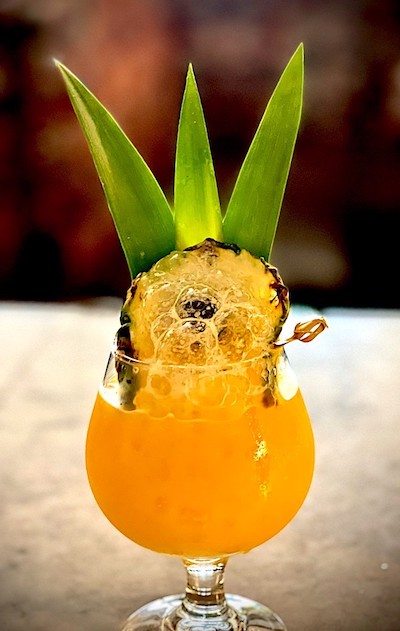 1) Add all ingredients (except for the sea-foam) to a small shaking tin.
2) Add ice to a large shaking tin.
3) Combine and shake vigorously for 10 seconds.
4) Strain over pebble ice into preferred serving vessel.
5) Garnish with a pineapple crescent & a maraschino cherry in the center.
6) Add three pineapple fronds behind the crescent.
7) Top with sea-foam and serve.

[Note: You’ll also need a fish-tank pump to create the bubbles. Thomas used a Uniclife UL40 Air Pump, which can be purchased via Amazon for about $15.]

1) Combine the juices, coconut rum, and salt together in a mixing bowl and mix well.
2) Using a hand blender, add the egg-white powder, then the xanthan gum; mix for up to 10 seconds.
3) Submerge the tube from the fish-tank pump into the liquid and turn it on; you’ll have robust, stable bubbles within seconds.