Chef Nikki Is the Cannabis Alchemist 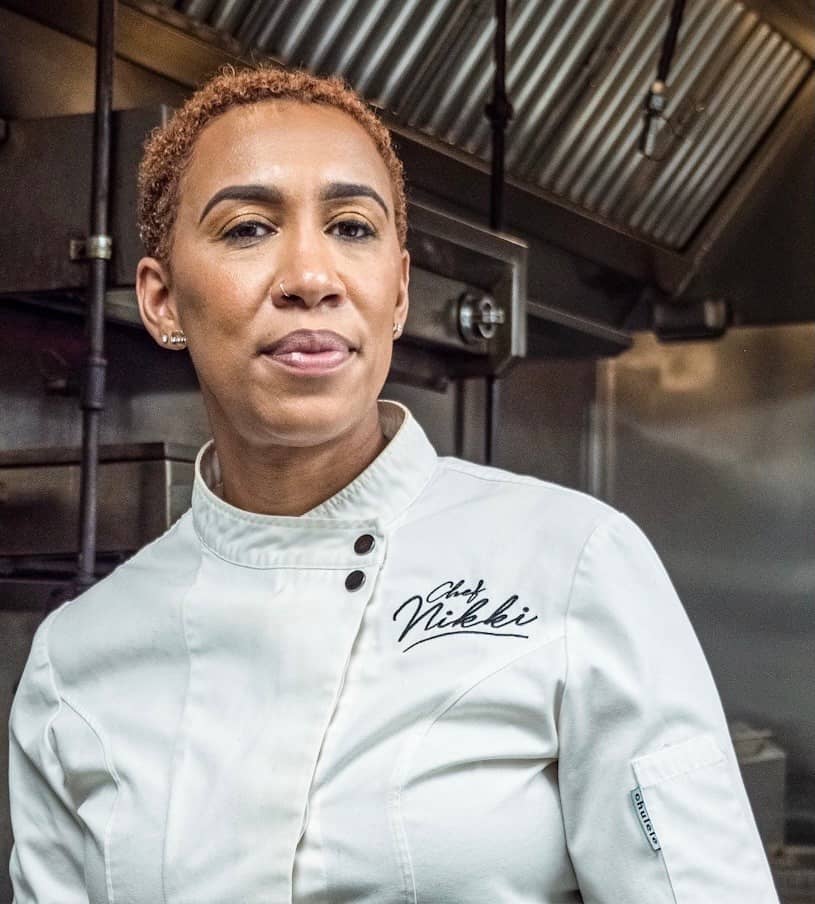 “A lot of people don’t realize that when you're including plant medicine in food, using scientific calculations, that is alchemy,” says chef Nikki Steward. “[My business] is called ‘The High-End Affair,’ but it’s high-end alchemy as well.”

Most widely known as Dave Chappelle’s personal chef, Steward was first driven toward a science career – she wanted to be a neuroscientist until the advisor explained medical residency – before landing on pharmaceutical sciences. She majored, graduated, and then worked in that space before having an epiphany: “I literally had a moment where I was like ‘This is whack!’ There has got to be something that invigorates me. I actually didn't realize I was a creative person.” At age 27, she switched gears and went into food, saying, “It was a shock to some, but others got it. I sold cheesecakes in college, but back then they were infused with Baileys, Kahlua, whatever I could get. I always had a thing for cooking.”

Steward learned to cook spending time with her grandmother in the kitchen. “Everything tasted so good, and that piqued my interest in understanding flavors,” says Steward. “So I kinda pulled from that inspo and started cooking quietly, inviting people over for dinner parties. I had a dinner party series around True Blood – that was kinda my thing, doing food themes.”

Chef Nikki’s early culinary training included studying under many great chefs, some with James Beard awards, some with Michelin stars; an extended stay in Thailand; and positions up and down the line. “That was when I understood myself as creative,” she says. “I have a very scientific mind but creating in the kitchen allows me a different freedom of expression.” Still, the grueling 16-hour days of executive chef work weren’t too different from the long pharmaceutical hours, and Steward, once again trying to find her niche, happened upon the world of culinary cannabis.

She had quite an entry point: Her very first cannabis dinner was for Snoop’s media company, Mary Jane, for 6-8 tapas-style courses for about 250 people. If you, like everyone else she’s told this story to, ask how the hell anyone gets a gig like that, let alone as their first foray into the cannabis space, she grins and says, “Ohio.” The Ohio State Buckeye stayed in Ohio partly because that’s where Chappelle lives.

So how does one properly dose people, especially at a Snoop party, ensuring they stay balanced and have a great experience? Science and math, two of her well-honed skill sets. She adds, “It’s hard to oversee adults and keep them from overconsuming because they are adults, but I wanted to make sure I set the standard and tone for what these types of events look and feel like. So I tapped into my pharmaceutical bag and remembered [how to calculate it].”

As Chef Nikki’s work gained celebrity fans, she and her partner created The High-End Affair, which touts “infused culinary entertainment at its best.” Her team travels the world producing grand cannabis culinary experiences, and their next stop is Austin on Monday, March 14 for “In The Mix : A High-End Affair Experience with Celebrity Chef Nikki Steward.” It’s a sit-down multi-course dinner. “That's where we start – this is a good intro to the space.”

Monday’s event is an excellent networking opportunity for anyone in Austin who is interested in cannabis to get together and get to know each other, she says. “The thing about doing this in a place like Austin is that cannabis culture is really starting to develop and everyone is finding their space and their way. And the only way we're gonna get Texas to be a med or rec state is to get more people together and for more people to identify themselves [as willing to help].” 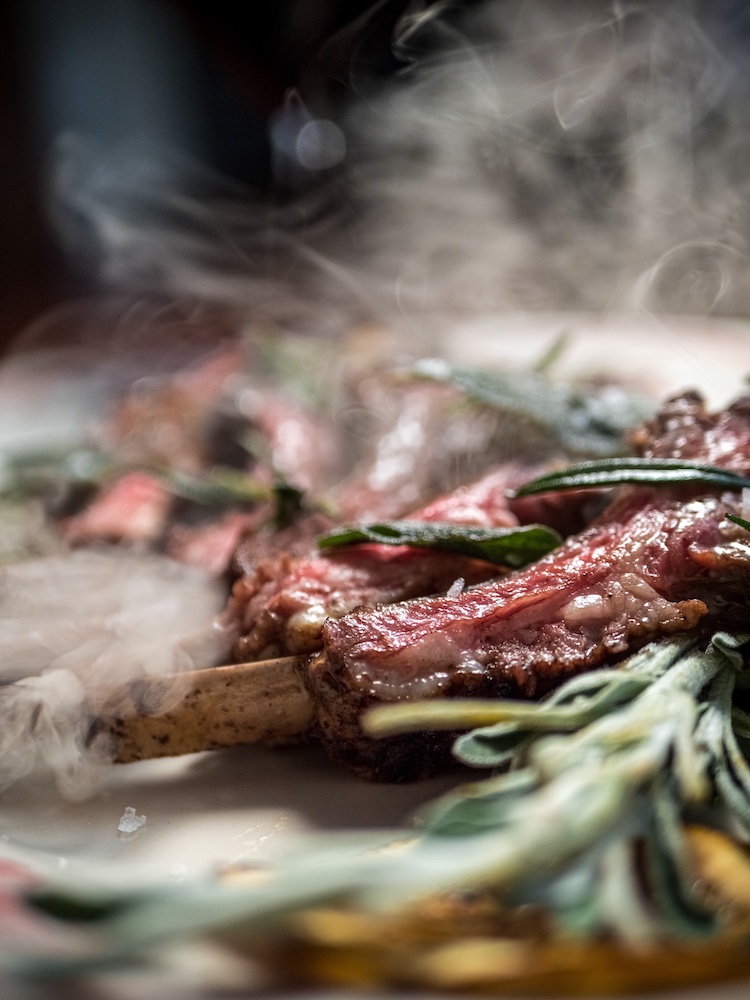 “I don’t want to eat an entire meal where all you taste is one note, weed, weed, weed. There’s a lot of science that goes into what I’m doing. This is a different level of molecular gastronomy.”

The High-End Affair takes safety, and privacy, very seriously. Attendees don’t find out the location of the event until the ticket is purchased and an NDA is signed; a “no phone” policy ensures guests feel comfortable and fully immersed; and the video- and photographers are strategic in their shots, focusing mostly on the food. Steward explains, “We are very mindful of that because there are times in different cities where we have members of Congress. We have definitely had people from various facets of the government. [That is] very hopeful and it's always good stories. Like, ‘Oh my god, I got to smoke a blunt with my Senator!’ But you know, more people consume cannabis than you think. More people who are into wellness and plant medicine and health and healing their bodies are larger consumers of cannabis than alcohol and so we are never surprised by the people who show up. We welcome everyone.”

Regardless of experience level, from barely curious to 100-milligrams-per-day folks, they’ve got you. The upcoming Austin event has a “lightweight” category and there are lifeguards – highly trained staff – on duty. She says, “We have a lot of safety measures in place, just to keep you from overconsuming. Or if you do over-consume, we can bring you back to balance. We’re playing with the chemistry of your body, so it's a balancing act.”

In both dishes and drinks, Chef Nikki infuses with bio-availability products, which bypass the liver straight to the bloodstream resulting in a faster onset. There are various CBD and THC ratios, maybe 1:1 or 3:1, some alcoholic cocktails with CBD simple syrups or bitters, and also straight mocktails. They also use a product called “Undo” – the tagline is “blaze the haze” – that can counteract the psychoactive effects and bring you back down within 15-30 minutes. “We have a few other tricks up our sleeve to make sure everyone gets home safely, but while you're there I'm taking care of everyone as if they’re my babies.”

When it comes to cuisine, Chef Nikki opts for a whole collection, not just one style. She says, “My job is to portray different foods of the world, so anytime I'm taking you on a food journey, I'm not gonna leave you in one place, I'm taking you around to a couple places.” She wants guests to be comfortable, so it's comfort food. There might be Thai influences, or Creole, or Caribbean, maybe an occasional straight-up American dish, but it’s comfort food nonetheless. And unlike many other chefs in the cannabis realm, Chef Nikki does not use carrier oils (like MCT) and she strips out the terpenes first, only adding them back in at the end so they hit on the nose. “Remember I'm a chef first,” she notes. “You don't want to get a huge terp taste – like the brownies you had in college, super dank – and I don't want to eat an entire meal where all you taste is one note, weed, weed, weed. There's a lot of science that goes into what I'm doing. This is a different level of molecular gastronomy.”

But don’t expect miniscule portions, artsy plating, or accouterments added with tweezers at The High-End Affair. Steward and her team pride themselves on serving excellent food and good portions: “I’m going to make sure you eat because I love to be fed, I love a hearty meal, and I want to make sure people get their money’s worth.”

She says, “You'll never have the same thing twice at my events… except for one thing, which is what everyone asks for… mac and cheese,” with an all-knowing expression on her face. It’s the ultimate comfort food. “In the old days I did an infused mac and cheese, and I still do infused mac all the time, but now I’ve switched it to not infused, just as a tableside [dish] because people just want to power through it. My mac and cheese is pretty legendary across the country – Dave [Chappelle] talked about it with Jimmy Fallon. They call it smack and cheese because if it’s infused it will smack the hell outta you.”

“My mac and cheese is pretty legendary across the country – Dave [Chapelle] talked about it with Jimmy Fallon. They call it smack and cheese because if it’s infused it will smack the hell outta you.”

So is it a grandma recipe? “It's really a grandma and mom thing. But you know it’s a thing where different people make it in different ways. Some people just do noodles, throw the cheese in there, put a little milk in there, and call it a day. Nah, I don't do that. I prefer to shred the cheese off the block, make a bechamel – that's an addition that my mother and grandmother didn't do – but the seasoning and the way that it's cooked is definitely coming from Grandma. I like baked mac and cheese; I don't like it when you just have noodles with cheese sauce. I like the crispy bits on the top. That's the best part. And I elevate it, put gold flakes on it, like a 14kt gold mac and cheese.”

Ultimately, Steward says, “I’m a hospitalitarian – I take care of people in the front and in the back. Your experience is consistent from the time you sit down ‘til you leave, and I come out and talk to every table.” Her end game is simple: This doesn’t have to be something you overthink. Just be mindful, she says. “I would like cannabis to be an ingredient in everyone’s kitchen and not segmented out. I believe you should be able to create a sense of normalcy when it comes to cannabis cuisine. To the point that I feel like at some point James Beard’s gonna have to create a new category. [They can] just have me consult at that point because I'll probably be an O.G. by then.”

What kind of alchemist or chef would only work with one element? Not this one. Mention mushrooms and her face lights up – she starts talking tissue samples, spores, cultures, the works. Psilocybin is enjoying a huge wave of legalization and decriminalization efforts across the country, often more successful than those for cannabis. Steward is part of an initiative called “Decriminalize Nature” in Columbus, a city she says is very similar to Austin. They decriminalized cannabis first in the state, so “they’re kind of the pariah of the state of Ohio.” (Sounds familiar, Austin?) They’re also introducing a harm reduction program, giving people access to testing strips and different things. “That’s a larger conversation, but we’re pretty heavily involved in the drug culture because we want people to be safe. That’s a lot of why I really take this to heart and [because of that] I really believe that the universe is like ‘I got you.’”

Steward grins and says, “I told my mom I’m doing the Lord’s work. She just laughed and said, ‘Alright.’”