And if you love great food, you’ll likely be returning too

Hallelujah! Hot Luck Fest is officially back and returning to Austin on Memorial Day weekend, May 26-29. 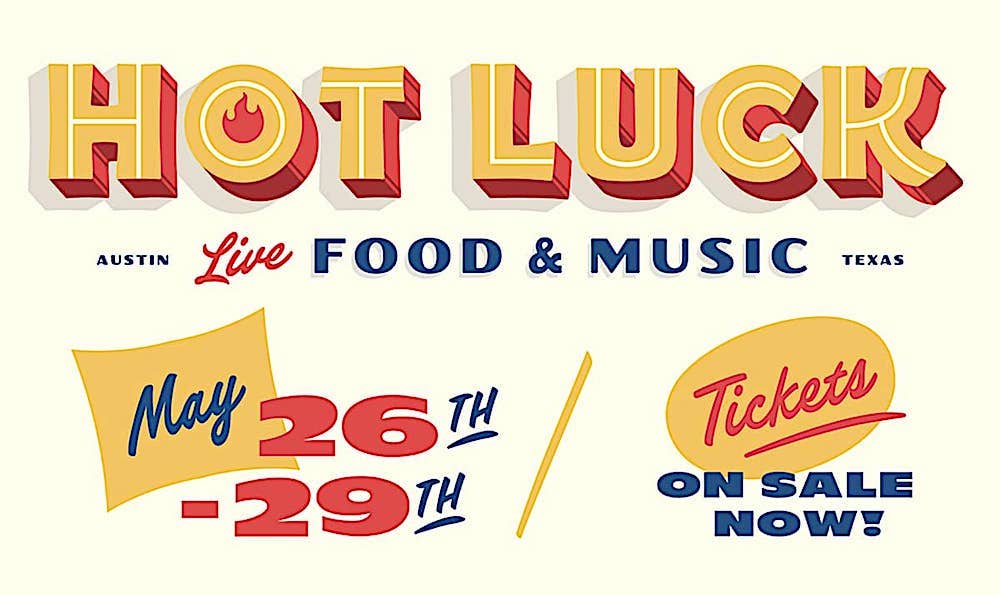 Founded by James Beard Award–winner Aaron Franklin, Guerilla Suit principal and Mohawk owner James Moody, and Mike Thelin, cofounder of Feast Portland, Hot Luck always manages to feel more like a family get-together and a backyard cookout than just another big music and food festival. And yet, tbh, it’s also a big music and food festival – designed by chefs for chefs, to gather culinary pros (and musicians!) from all over the country and beyond.

“Super stoked that we’re able to bring Hot Luck back this year,” says that indefatigible ‘cuemaster Franklin. “I’ve invited a whole lot of my homies to come down to Austin to cook. We’ve all been through a lot in the last year and a half, and it’s going to be fun to all get together and catch up – and help our friends at Southern Smoke, who continue to serve our industry unfailingly.”

Note: Before we go any further, please note that individual tickets and weekend passes for the four-day fest are on sale as of right now.

The Hot Luck weekend means fun food events by day, featuring some of the most talented chefs in the world making food and serving good times at beloved Austin-area venues. At night, the focus shifts to music as guests experience Austin nightlife with shows at some of the city’s most iconic clubs, including Mohawk and Antone’s. This year, Hot Luck welcomes Superchunk, Shannon and The Clams, DJ Jazzy Jeff with DJ Mel, Cam Cole, Joe Marcinek Band featuring The Meters' George Porter Jr., and more.

You can click that Hot Luck link for complete deets, of course; but this here’s a posting on the Chronicle’s Food Blog, right? So let’s focus on the attendant chefs:

Okay, you got all that? Are you almost drowning in your own drool yet, citizen? Totes understandable, because there is nothing – nothing! – in this town that ever matches the breadth and depth of this sort of culinary talent, of this dedicated a food industry horde of perfection-obsessives and craftmasters. And, yeah, all that music stuff, too.

Note: If you’re not at least a little tempted by what’s going on here, you might wanna write in to our Luv Doc, ask him what the hell is wrong with you? If, on the other hand, your interest is piqued … well, here’s that link just one more time.