You Deserve an Escape This Year, to Lakeway Resort & Spa

It’s time for a little escape, isn’t it? An escape from the humdrum, grind-you-down, workaday world – even when (or maybe especially when) that daily grind is complicated by the latest variant of COVID-19 and all it entails?

This pandemic isn’t doing much to soothe a modern human’s frayed nerves, tell you what, and here’s a whole new year in which to take some positive action toward self-care.

Now, sure, traveling by plane may be out of the question currently – but never mind those big old jet airliners. A change of scenery’s always good, even if it’s only a few dozen miles away – or just in another, snazzier part of your local environs. And not just change for a few hours – although, if that’s all you can manage, give it a whirl, and more power to you – but for an overnight stay, a whole shift through unconsciousness and back again, before you return, refreshed, to the same-old same-old.

It’s no big secret: Hotels in and around Austin weren’t built just for out-of-towners to fill up during SXSW.

You knew that, right? You’ve been downtown, you’ve noted the fancier places and the bargainish bed-sits, at least from the outside, and you’ve probably grabbed drinks in a few of the nicer bars associated with the finer hotels, maybe had dinner in some of the excellent restaurants therein? And you also know there’s, like, resorts out there along the length of the Colorado River – architecturally expansive venues where conventions and family reunions and fabulous weddings go down?

There’s your escape, citizen. There’s your reprieve, however brief, from the mind-numbing dross of quotidian drudgery. There’s, if you choose wisely, your little bit of heaven on Earth: It’s waiting downtown, or it’s just beyond the city limits.

And this article you’re currently reading? It’s going to give you a for-instance of one of those options – the just-beyond-Austin option.

[And here’s where we cover the downtown option.]

This article is going to look at the magnificent Lakeway Resort & Spa, right there along the shores of Lake Travis.

1. First, you’ve got to drive for a little while. Not too far, nothing like a day trip or even half-a-day-trip, but far enough so you feel like you’ve actually gone somewhere past all the Austin-powered hubbub you’re trying to escape. Just a little jaunt past Mansfield Dam, in other words, winding your way through well-paved tree-bordered roads until you reach the resort on the lake.

2. You’ve got to smell the air when you arrive. Really, just about half an hour out of town and it’s already noticeably fresher and cleaner. (You’ll notice this again when the sun goes down, too – the lack of what urban planners call light pollution, the greater presence of night and its natural darkness allowing all those stars in the vault of heaven to shine down on you in their full splendor.) You’re only in the parking lot, at this point, and already you’re thinking, “Yeah, this was a good choice.”

3. Check in at the front desk. It’s what you do at hotels and resorts, of course, and it’s done so easily here – the staff at Lakeway are on top of things, and they’ll pleasantly welcome you to these elevated lodgings. Look around the lobby with its rock-solid walls, the expanses of dark wood, that soaring ceiling. This is a place that says “Here’s where the tradition of hospitality thrives. Here’s where your daily cares will melt away.” (Also, ah, you should’ve been there in December, when the lobby was graced by an enormous Christmas tree – so beautifully decorated, its base surrounded by brightly wrapped presents, its topmost branches tickling the rafters. But, don’t be too disappointed: There’s something in that lobby that’s always there, that’s even bigger and more impressive than any tree that’s not a Giant Sequoia: The stairs curving from the lobby toward the bar & lounge on the next level down. What a combination of physics and joinery and polished wood! So much expert craft and material merely to link one place to another, you know? You’d probably planned on visiting that bar sometime during your stay, anyway, right? Doesn’t matter. Doesn’t matter if you’re somehow allergic to beverages in general: You’ve got to walk down those stairs at least once or your life will be duller for having missed the experience.)

4. Get to your room. That requires a hallway, yes; and if the width of a hallway can be used as an indicator of quality, then you’ll be nodding that good-choice nod to yourself again. Because the hallways in the Lakeway Resort are generously wide. Your reporter suspects it’s because of all the weddings and conventions and such that go on there, that the extra hallway-width allows easier passage for multiple service carts and so on, and that’s why they’re faintly, um, brobdingnagian and definitely beyond the width of hallways in even fancier hotels. Does it seem odd, to be so impressed by a hallway? Suggestion: Walk through one of these and see if you’d don’t agree.

5. Enter the room that you’ve reserved. Your current reporter and his lovely bride stayed in a regular room, no fancy suite or anything, and it was satisfyingly comfortable: Clean, bright, appointed with all the usual amenities a good hotel should have. (The bed was especially fine. Which, thinking of this recent review of Bee Cave’s Hotel Sonesta, makes me wonder if there’s been some, what, some recent industry-wide upgrade of sleeping-furniture in the past few years? Because I slept soooooo peacefully in that bed.) And here’s another plus: Even though it was a regular room, there was a small balcony with a view of Lake Travis. “We have 168 guest rooms and suites,” as the Lakeway’s website notes, “many of which face Lake Travis with private balconies and offer incomparable views of the water.” That incomparable isn’t just a hype adjective, either: The Lakeway Resort is built up the side of a cliff, after all, which makes the views like *chef’s kiss*. And, speaking of chefs … 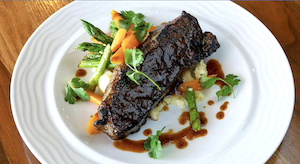 6. Have a meal at the TR Restaurant. That’s the resort’s main dining venue, and it’s a solid example of Austin-casual fine dining. We can give another glance to the resort’s own spiel – “Travis Restaurant provides a sophisticated yet rustic atmosphere with pristine views of Lake Travis and Texas hills. Enjoy a diverse menu of Southern comfort cuisine featuring breakfast, lunch, and dinner entrées made from fresh local ingredients.” – because we found it to be true. The cocktails and the appetizers were delightful in and of themselves, but the nighttime view of Lake Travis on the outside patio made them seem downright enchanting. And, as a main, the papperdelle pasta was exquisite – the delicate roasted tomato sauce spiced just right (and the noodles not too damned al dente, you know what we mean?) – and that dish’s flavorful elegance was matched by the eggs benedict at brunch the next day. You don’t even need to stay at the resort to happily partake of such cuisine; if you live in the area, the place might already be your fine-dining go-to.

7. But – there’s something you should know about Lakeway’s TR Restaurant. No, not that it’s funny that they call the place TR Restaurant, even though TR stands for Travis Restaurant, so it’s like they’re calling it Travis Restaurant Restaurant. Everybody knows that’s funny (and just the sort of linguistic goof you’d find in a David Foster Wallace story). No, what you should know is this: The multi-roomed TR venue, when it was first built back in 1963, used to be the entirety of the original resort. That’s why the restaurant’s building, rising majestically over the resort’s pools, looks so impressive and contains several large dining areas. And the rest of the resort – with its lobby and bar and spa and guest accommodations, its vast meeting rooms and that one enormous glass-walled main ballroom overlooking the water – the rest of the resort, completed in 1989, was constructed with all its marvelous rock and wood and glass and steel, to match that original building. The consistency in style is remarkable, and the style itself is grand and welcoming. 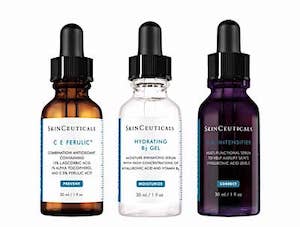 8. Oh, did we say “spa” up there? Because that’s another thing you should do: Indulge yourself with a full massage or a facial treatment at Lakeway Resort’s professionally staffed spa. The experience is heavenly, no matter what options you choose – especially if you arrive early and make use of the dry saunas and showers before your session. The Spa at Lakeway features a variety of body-refreshing services using the popular SkinCeuticals products, the prices aren’t out of line with what you’d find elsewhere, and – when you walk out of the spa all glowing and feeling like your timeworn carcass just won the rejuvenation lottery, guess what? You’re still on vacation in the middle of a lovely resort on the lake.

9. Swim. Yes, swim. Sometime, before you have to leave this lakeside paradise, make use of the several big pools available for guests. There’s an adults-only pool (with a swim-up bar, for maximum rockstar style), a family pool, and a separate kids’ wading pool. In the spring and summer and fall, the resort hosts music-sparked parties where they grill up burgers and such poolside, making the whole islander-vibe scene even more festive.

10. And, finally, come back. Because, yes, eventually you’re going to have to leave this relaxing reprieve and return to your daily grind in the city. Ah, more’s the pity! But the Lakeway Resort & Spa isn’t going anywhere: It’ll be right there, improving the view beside Lake Travis, all its amenities thrumming smoothly along and waiting for your next visit.