Okay, this is what the PR blast shouted our way: “Bee Cave rivals Napa Valley with a diverse range of breweries, wineries, and distilleries, complemented by a burgeoning food and restaurant scene.” 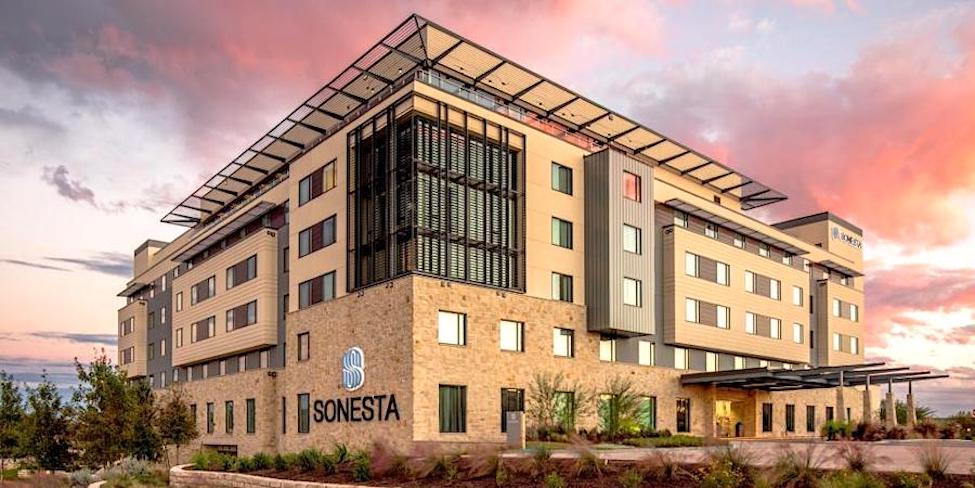 Ah, how's this for a base of operations?

And we knew that a lot of oenophiles would be triggered by that statement, as California’s Napa Valley has long been regarded as pretty much the American apotheosis of the wine industry.

[Note: The author Lenny Kleinfeld’s terrific, viticulture-inflected first novel Shooters and Chasers wasn’t set out in Fredericksburg, after all, was it?]

And so we wondered just how accurate that Bee Cave boast might be – especially as, quoting it above, we’d had to add our own Oxford comma to the sentence.

But your current reporter isn’t a wine aficionado, tbh, and has also been too busy producing reams of single-estate, artisanally crafted journalism to investigate such claims.

Luckily, though, he knows some people.

He knows, to be precise, Rowan and John Halliday – wine lovers both well-informed and linguistically articulate – who’ve done the whole Napa Valley thing and who, in fact, have previously vetted wine for the Austin Chronicle. So we dispatched that local married couple of thoughtful hedonists toward the town of Bee Cave on the edge of the Texas Hill Country, to spend a weekend at the Sonesta Hotel and partake of the hospitality therein and explore a few of the wineries and breweries and distillers nearby.

You know: A little investigative sojourn sort of thing?

Two nights at the Sonesta. Two different winery/distillery visits in the daytime. A refreshing escape into the tree-studded hills and verdant expanses and laidback resorts that lie just beyond the increasing rat-race ruckus of Austin, Texas. And now Rowan and John Halliday have reported back, and we’ve got the scoop right here:

Rowan: The Sonesta was very friendly and well-organized. They had, obviously, a lot of weddings there, because there were little gift bags all lined up. I was impressed by the degree to which they had signage for all their Covid protocols – printed plastic signs. The rooms are very comfortable – the bed was super comfy.

John: I slept through the whole night and my back never hurt. Which, for me, that’s usually impossible. Those beds are great.

Rowan: It was really easy to find your way around the hotel, too – a nice, simple layout. I don’t know that I’d call it a destination, exactly. It’s not a hotel you’d go to, to just stay in the hotel? But it’s so close to a lot of attractions in the Hill Country, and I’d definitely put family up there. If we were going to spend time driving around the Bee Cave area and, you know, doing stuff – the Sonesta is a great base of operations.

Brenner: And there’s a bar on the roof?

John: They have honey of some kind in every drink.

Rowan: And every cocktail has at least one form of Texas-sourced alcohol, too. I really appreciate that, because I’m a big fan of local things. The appetizers were tasty, the service was good. The – oh, the bacon-wrapped shrimp were delicious! There was some road noise, from six stories below, but I’d happily sit up there any time – and eat some of their appetizers. We were there at sunset – a lovely view – and it was such a relaxing, comfortable vibe.

Brenner: But that’s not where you had supper that first evening, right? 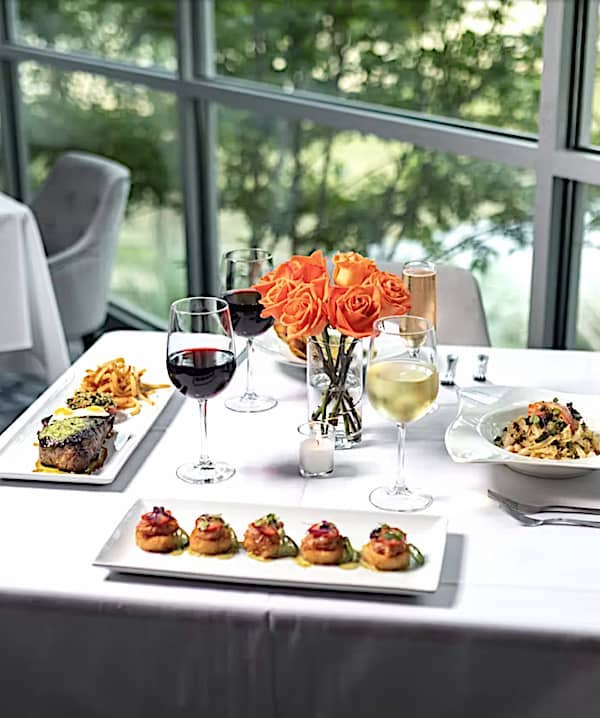 Rowan: No, we ate at Plate by Dzintra, in the Galleria – which is really close to the hotel. Everything that there is in Bee Cave was pretty close, actually. Bee Cave isn’t huge, so that’s not hard, but it makes Sonesta very convenient.

Brenner: Okay, and the food at Plate?

Rowan: It was phenomenal. We had the pork belly appetizer, which was very crispy, with a good sweet sauce. And they use chamomile vinaigrette on their bread and butter – yum! The mains we had were fennel-crusted tenderloin – very tasty, strong fennel flavor, but it works – and short ribs. The ribs were amazing, practically melty.

Rowan: [nods] The service there is super friendly and responsive. And the cocktails were great. In fact, everywhere we went, I was consistently impressed by the Bee Cave cocktail game. I was not anticipating finding such a thing in Bee Cave, and yet there it was. Plate is definitely a destination sort of restaurant. We keep thinking how it’s just 25 minutes from our house.

Brenner: Okay, and then it’s back to the Sonesta, that comfortable room, a bed that lets John sleep through the night, and the next day you go on a couple of tours. You checked out – a winery? And a distillery?

Rowan: Yes, it is! We can’t possibly recommend the Desert Door tour enough. They were so nice, and they really knew about their products. You know how, sometimes, you go someplace and it’s obvious the people have some kind of spiel memorized? We could tell that the person who was guiding us wasn’t working from a script, she actually understood the sotol and the cocktails. She answered all our questions, and she made recommendations based on what I told her of my own preferences. The tasting there was three different kinds of sotol, and it was all delicious. We wound up buying a bottle, too – of Driftwood Cowboy, the Desert Door collaboration with Garrison Brothers. Oh, it’s so good. And it was interesting to talk about the concept of not just working sustainably, but, because sotol is an invasive species for a lot of ranchers, Desert Door works with ranchers to get the plants off their property – so it’s an everybody-wins situation.

Rowan: Hamilton Pool Farms. They’re a winery and a working sustainable farm – the current owners recently acquired it from Westcave Cellars who moved to Hye. They had a staff shortage when we were there, because one of the people had broken her foot, so her husband was doing all the tastings. It was just him and 12 visitors, and he handled it well. There were chocolates, too – little chocolates for pairing, which went especially well with one of their red wines – and it was a very relaxed and enjoyable afternoon. They’ve got a nice patio area, and we were doing everything outdoors. We were able to sample a 2019 Viognier, a 2019 Tempranillo, their 2018 Spot Rose, a Washington Merlot called Drops Like Stars, a 2020 Petit Verdot –

John: That one would go real well with barbecue.

Rowan: Yeah – our taster suggested steak, but I think lamb is probably a better fit. And we tried some other good wines, too, but – you need to know this: When you’re trying to find the place, GPS will drop you at a creek. When you get to the creek, don’t trust the GPS: you’ve got to drive another couple of miles. The winery’s big and easy to find – it’s got a big concrete sign – so if you’re unsure if you’ve passed it, you haven’t passed it. Just keep going, and you’ll know it when you see it.

Brenner: Sounds like a full day. And then, back to Plate by Dzintra for supper?

Rowan: No, to the Garden at Ellera. That’s two restaurants: One is sort of fancy and upscale, and the other one is more casual; they’re both done by the same chef, with the same sort of style, but the casual one is more pizzas-and-sandwiches. And both places are delicious. The cheese and salumi plate is huge, with lots of different things; it’s really an app for four not two. But all the food was super yum, especially the scallop roll on a crisp soft roll. And, again, the cocktails were impressive. In Bee Cave!

Brenner: So the whole weekend at Sonesta wasn’t only enjoyable, it was also … uh, what’s a good word? Revelatory, maybe?

Rowan: Well, Bee Cave’s grown a lot since I’ve lived in Austin. And I’ve been out to the Galleria every now and then, because there are stores I shop at, but I’d never been to visit Bee Cave for the food or to see any of the local sights, ever. And now I see that, obviously, I’ve been missing out.