The brisket king was part of a Central Texas BBQ dynasty

When I moved to Austin in the late Nineties, getting to know Central Texas barbecue naturally involved that legendary Taylor joint, Louie Mueller Barbecue. John Mueller was always a part of the equation. 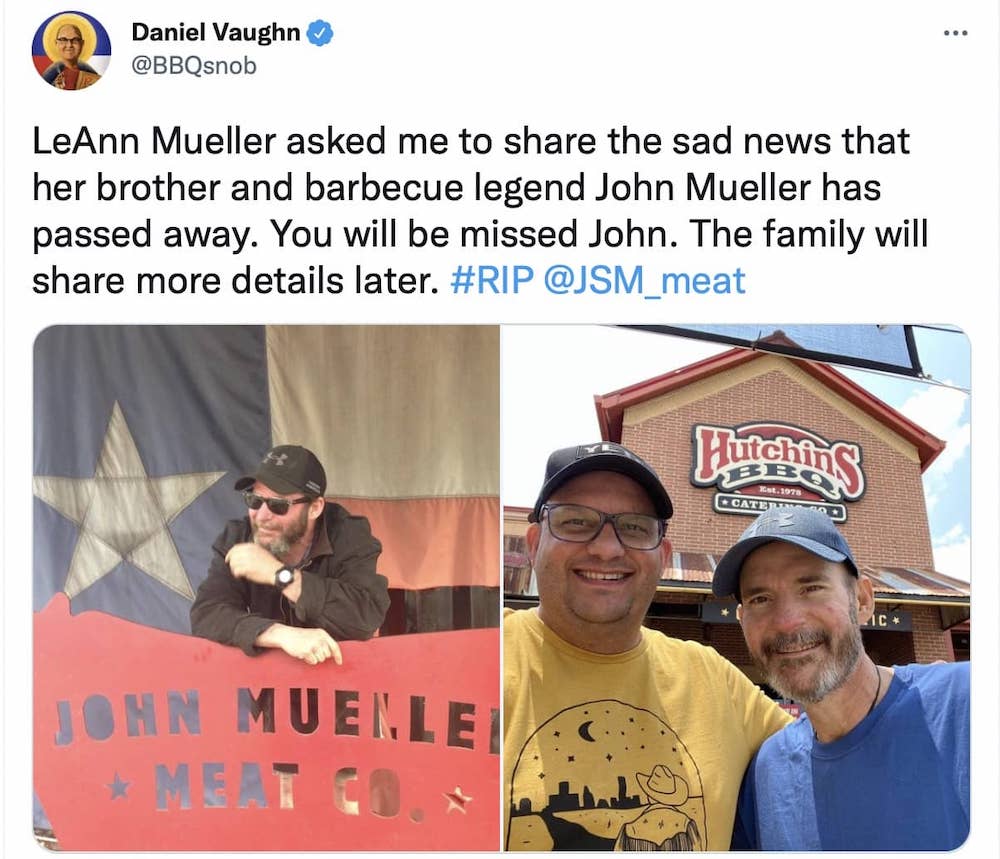 Mueller passed away last week at the age of 52, leaving behind a legacy of briskets and nomadism.

I remember seeing him behind the counter at the restaurant his grandfather started, working beside his dad, Bobby. Sister LeAnn was probably working the till in the family business that has inspired the best barbecue being made today.

Eventually John left and moved to Austin, opening a place on Manor Road, bringing the best of his craft to Austin beyond the typical small-town environs of Taylor, Lockhart, and Llano. Twenty years later, River City is the center of this smoky universe. Bobby and John Mueller in 1999 (photo by Gerald E. McLeod)

The connections are as tight as they could be from then to now. Aaron Franklin not only worked for John for a bit, helping out with the business, but even purchased his smoker when that venture closed, kicking off another barbecue legacy.

After Manor, John opened JMueller BBQ on South First with LeAnn, who rebranded the shop as la Barbecue after he left. His next few stops were on the Eastside, after which he left our fair city for other adventures, finally landing at Hutchins BBQ in Frisco.

During the era he blessed our city with his work, I always tried to make the trip a few times a year to eat the famously prickly John’s barbecue. Partly that’s because it was good. Consistently good. But it also reminded me of the heritage of this entire enterprise. Leaving Louie Mueller with my clothes smelling of smoke imprinted something on me, and every time I ate John’s brisket (or now when I head over to Cesar Chavez for some la Barbecue), I’m tapping into that same sense memory. It’s family, it’s history, and it’s just darn good. And hopefully, it always will be.