Well, yes, those are some of our favorite things, too

This is the most eating time of the year, after all.

And if we’re eating so much, you can be sure that we’ll be including chocolate and cheese and waffles and caramels among the gustatory delights we’ll be pleasing our palates with – or gifting to our favorite friends.

There are so many options, even in these days of borked supply chains, and we’re going to point you toward four (one in each category) that we’ve recently experienced much pleasure from. Because you might want to, you know, experience such pleasure yourself. 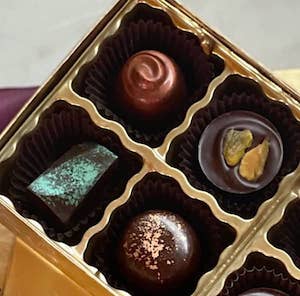 1. CHOCOLATE
Here’s a local recommendation that’s sure to knock your chocoholic socks off. We mean, we already noted the goodness of a different company in our earlier “Five Sweet, Five Savory” round-up, sure; but we’re not talking about them right now. We’re talking about Intero. And, yes, you’re right, Intero is that incredibly good Italian restaurant on East Cesar Chavez. But surely it’s not an epicenter of delicious chocolate, too? Well. Glad to tell you: It is. Because Intero’s pastry chef is Krystal Craig, and the self-taught chocolatier ran her own shop for years – before teaming up with husband Ian Thurwachter, one of Austin’s finest culinary wizards, to bring us a full-spectrum dining experience. And so now you can get chef Craig’s exquisite chocolates (including a variety of house-made truffles and bark sets) via the Intero website, with pickup at the restaurant from Dec. 7-24. Just, ah – maybe leave some for us, please? 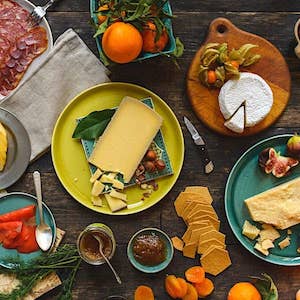 2. CHEESE
As Austinites, we can hardly get enough of what Antonelli’s is dealing in – and our dairy-free vegan friends are pretty much stalking that Rebel Cheese company. But cheese comes from all over, of course, and the Connecticut-based Cheesemonger Box from Laura Downey and Chris Palumbo is a cheese-of-the-month-club service that will make sure your kitchen knows the heights of authentic flavor that fermented dairy products can reach. The cheesemonger couple, members of Slow Food USA and the Vermont Cheese Council, work directly with small American farmers, creameries, and cheesemakers nationwide and also source artisan and farmhouse-style cheeses from Europe. That alone might be enough for you, because you’re all about the handcrafting and the flavor and supporting farms that aren’t huge corporations, and so you’re good to go. But, wait, maybe you want to gift a cherished friend or family member with a Cheesemonger Box? And so you’d kind of want the packaging to also be, um, well, uh … Listen, citizen: Cheesemonger’s got you covered. The boxes themselves, that the selection of cheeses are delivered in? So stylish and adorable. 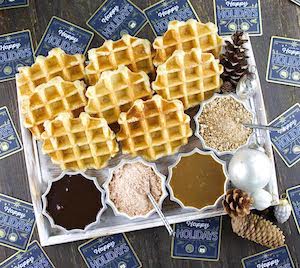 3. WAFFLES
Some people – hello, acclaimed contemporary American author Jonathan Franzen – have to, at least initally, make a show of not being down with Oprah Winfrey, of preferring to eschew validating the woman’s (or the woman’s corporation’s) targets of benediction. We might’ve been like that ourselves, at least a little; because we sometimes pathetically aspire to a sort of, ah, hipster vibe? But: No more. Not since we’ve eaten the Liège Belgian Waffles from Eastern Standard Provisions Company. Because, see, Oprah chose these waffles as part of her 2021 holiday gift list. And these waffles are … we mean, just the memory of their sweet, just-crunchy-enough-on-the-surface, just-soft-enough-inside, ineffable waffle-y goodness … just the memory of that is making us drool. We’ve never – not at grandma’s house, not even at some fancy restaurant’s posh brunch – had waffles this good before. And of course they come in a fine gift box (that’s what Herself recommended, to be specific) with little jars of dark chocolate fudge sauce and peanut butter caramel sauce, and packets of strawberries-and-cream topping and French toast sugar, and – yeah, nobody in our house has anything but admiration for Oprah now. Nobody in our house wants to go for longer than a week without inviting Eastern Standard Provisions Company to the breakfast table again. 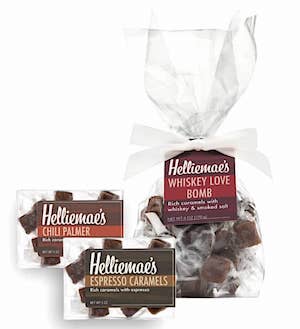 4. CARAMELS
You know it as well as we do: There’s caramels and then there’s … oooooh, caramels. What we’re enamored with right now are Helliemae’s – because these are caramels. These little treats from Hellimae’s are so creamy and rich, made fresh by hand in a kitchen built from a renovated 1950s service station in Wheat Ridge, Colorado, individually wrapped in cellophane and shipped (in a surprising variety of flavors like Harvest Apple Spice, Whiskey Love Bomb, Espresso, and the classic Sea Salt) everywhere people enjoy tantalizing bits of buttery sweetness. The company was doing well enough just selling bag after bag of the delicious things, but now the confectionary conjurers at Hellimae’s have gone and created special gift set collections, too, just in time for the holidays – and we can’t imagine a properly stuffed Christmas stocking without them. 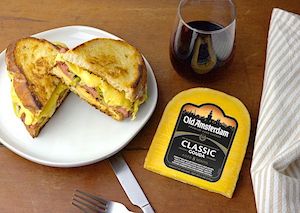 BONUS: MORE CHEESE
Because just four items is one short of our preferred Five Things format. And because, when we talk about cheese (see above), it makes us think of … more cheese. Which brings immediately to mind the cheeses of Old Amsterdam from Holland’s Westland Cheese Company: Premium aged Gouda cheese made from pasteurized cow’s milk, boasting a firm texture, deep amber color, and smooth, robust flavor. Because we already had a big bird earlier in November, so we skipped the turkey for Thanksgiving and got a spiral-sliced ham from the Honey Baked Ham Company instead. Served up a platter of overstuffed ham sandwiches on thick crusty bread, the ham slices alternating with slices of Old Amsterdam Gouda, everything seasoned with just a faint smear of stoneground mustard. Talk about a holiday win! (Note: We may never go back to turkey again.) Then, as we had yet another thick wedge on hand, we took the remainder of that Gouda (a washed-curd cheese, with a minimum butterfat content of 48%) and melted it to serve as the perfect topper to a pair of apple pies. Ah, *chef’s kiss* Reckon we’ll be indulging like this again, cheesewise, before the year ends. And, easy-peasy, you can find these Old Amsterdam beauties at your local H-E-B; but, if they’re sold out, you can also get ‘em via Norseland right here.