You do, after all, deserve the best

We totally enjoy the basics, sure, especially when they’re of the worthiest qualities. And we’ve even become rather chummy – thanks, pandemic! – with the recent upsurge of canned cocktails in this world. But.

1. VIOLET CROWN ABSINTHE
No way we could do a list like this without starting off local. No way we could do a list like this without including absinthe. Luckily, one stone takes both birds: Opal Absinthe from Bastrop’s own Violet Crown Distillery is as potent and rarified as an absinthe needs to be; it’s also our preferred entanglement with the green fairy, even though it’s the more delicate sister to Violet Crown’s fiercer Emerald version of the wormwood-based liqueur. “I chose the parts I really wanted from about six different recipes and combined them in my own personal recipe," Matt Mancuso, V.C. co-owner and head distiller told us last year, “then adjusted the levels through about a dozen different iterations, and came up with essentially what's in the Opal bottle.” What’s essentially in that Opal bottle is, we’ll insist, what’s essential for any booze-bunker that goes beyond the same-old same-old. Now, maybe you’re looking for something stronger than the Opal’s 110 proof elixir? Stronger in flavor and toxic firepower? Then the Emerald, with its second round of herbage, is your thing. “Our Emerald is 140 proof,” the Crown’s Jessica Graves noted, “because once you add that much more herb, that much more oil, you need to have a higher proof of alcohol to contain it all in solution.” It’s your thing, but, tyvm, we’ll stick with the more subtle goodness of the Opal. Recommended: Seek either of them by the bottle at The Austin Shaker or that Spec’s on Airport.

2. ITALICUS ROSOLIO
Rosolio, Wikipedia tells us, is an Italian liqueur made from a base of alcohol, sugar, and water in the same proportion, which is flavored by adding an essence of any of various types. What Jimmy Wales’s Digital Wunderkammer neglects to mention is that rosolios were a big deal back in the 16th century and all the way up until the early years of the 20th – after which the aperitif went, like gentlemen’s fine haberdashery, out of fashion. Now we’re here to tell you that Italian mixologist Giuseppe Gallo has brought the tipple back, infusing its 40 proof mildness with the essence of Bergamot oranges from Calabria, and that the result is as refreshing as its Art Deco-looking bottle is elegant. Floral, citrusy in the most subtle way, this stuff is made for sipping on-the-rocks of a solo afternoon or enjoying in a cocktail while socializing with your classier friends. Cocktail, did we say? How about a Sgroppino: Two parts Italicus, two parts Prosecco, and a scoop of lemon sorbet. Sweet, sour, satisfying. Or maybe that Negroni Bianco is more your style, with its equal parts Italicus, London dry gin, and dry vermouth? Yes – style is definitely one of the key words here. Also, flavor. 3. KASTRA ELION VODKA
Citizen, you’ve never had a vodka like this before. Unless you’ve previously – how? – had a vodka distilled from Greek olives. (Okay, a lot of olives – handpicked from Greece’s Nafpaktos region – and some curated grains.) Kástra Elión is a vodka that packs a bracing Hellenic punch, those botanical constituents having been balanced by the brand’s master blender Frank Mihalopolous until it produced “the perfect blend with ripe olive notes, refined with peppery undertones, a soft rounded finish and a buttery smoothness that stands alone.” Yes, well, the “stands alone” claim for buttery smoothness is thwarted, we’d say, by the existence of that Russian Standard vodka we shouted out in this previous wrangling of spirits. But, efharisto poli, there’s no denying the fine quality and heady complexity of this Greek spirit called Kástra Elión. (You know how James Bond, that Fleming-conjured gentleman of a spy, always specified vodka martinis? Well, ditch the early-career Sean Connery and replace him with Anthony Quinn: That Bond, we’re certain, would drink only martinis made with Kástra Elión.) Bonus, because packaging is a thing: The solid white bottle, like a modernist take on some ancient amphora, except without a pointy end that would make it impossible to stand up? That’s a bottle of vodka you might not be able to gift to a friend – because you want so bad to keep it for yourself. But if you are a generous human, after all, you should also know that Kástra Elión can be delivered as part of an ultraposh gift box. Verdict: Some Greeks bearing gifts should be welcomed with open arms. 4. MR. BLACK
When we hear that Mr. Black is the #1 super-premium and #1 fastest-growing coffee liqueur in the USA, we roll our eyes. Yes, we do. Because we’re above such things, see? Because, popular tastes? The latest trends? That stuff provokes a certain undeniable hipster response deep in our soul, as if we were still in freshman year at college and trying to impressive everyone with how fucking iconoclastic we are. You know? But then we actually try some of this Mr. Black, this coffee liquor made by hand at a distillery & coffee roastery north of Sydney, Australia. We actually sip some of this elixir that’s a blend of top-grade Arabica coffees and Australian wheat vodka. We actually, yes, imbibe a bit of this dark fluid conjured from cold-brew extraction – with no added flavors, fillers, or preservatives. And our eyes stop rolling. And our mouths – the flavor-sensing nodes therein, especially – start celebrating, sending up a tastebud-backed hallelujah that their very existence should come into contact with the deep, robust, and not-too-sweet coffee excellence of Mr. Black. Also, since we’re a product of the Eighties, we’re moved by the very Australia-ness of this situation to paraphrase Paul Hogan in Crocodile Dundee. We point at a well-made espresso in some local cafe; “That’s not coffee,” we say, dissing the demitasse’s steaming contents; we hoist our bottle of Mr. Black; “This,” we say, “is coffee.” 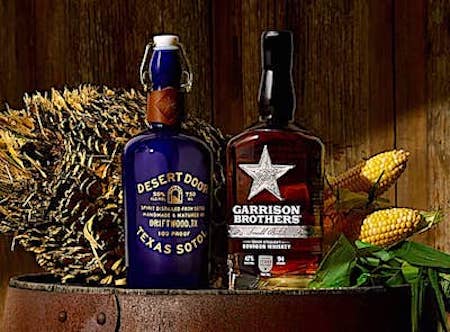 5. DRIFTWOOD COWBOY
As above, so below: We end this list by returning to the local distilling scene – but we’re returning to it with a confession: It wasn’t until a couple months ago that we learned just how much sotol isn’t like tequila. We already knew that it was made from desert plants, and that those plants weren't agave. We'd heard it came from a specific species of a similar desert plant. We didn’t think it could make that much difference, though – stupidly assuming that one desert plant is pretty much like another. And we’re not so enamored of tequila in general. (Yes, right, how dare we live in Texas?) But then we had some Texas Sotol, made by Desert Door right out there in the Hill Country. And we were like, “Whoa.” We were like, “Oh shit, if tequila tasted like this, I’d drink nothing but tequila all the time.” It was smooth and refreshing and unlike any other spirit we’ve ever tried. Intriguingly botanical. So, if you don’t already know sotol, friend … whether or not you enjoy tequila … please, give it a try. Because only then will you understand why this Driftwood Cowboy collaboration between Desert Door and the whiskey wizards of Garrison Brothers is such a big deal. Because that superb sotol’s been aged for years in barrels that previously held Garrison bourbon. And if you have any idea of the subtle hues of flavor that process imparts to a fine liquid canvas like sotol, then, well, you’re welcome. We love spreading good news. We wish we could also tell you that they won’t be sold out by the time you read this, but here’s you a link just in case.

BONUS: MUDDLE ME THIS, BARMAN!
Yes, it’s our lagniappe recommendation: A little barware-based word to the wise. Because, if you’re into these sorts of liquors at all, you may also enjoy crafting your own cocktails. And if you’re making more than one cocktail in an evening, then you’ll appreciate this Action Muddler. The thing’s got a patented spring-action design with a rotating head, allowing you to press down and thoroughly muddle whatever needs muddling – without having to twist your wrist over and over and over. Because that sort of strain adds up, y’know? All those bartenders you see, even the young ones, wincing as they deal with repetitive-stress injuries? Should’ve been using this fine, industrial-strength-but-easy-to-use muddler from Cork Pops to create all their mixological marvels. Like we said: Word to the wise. *avuncular wink*