When you don't want to get too freaky about the whole thing, right?

Because – never mind all the innovative malarkey like, you know, oyster-stuffed marmoset or coelacanth à l’orange with larks’ tongues and so on – sometimes you want to celebrate as traditionally as possible. 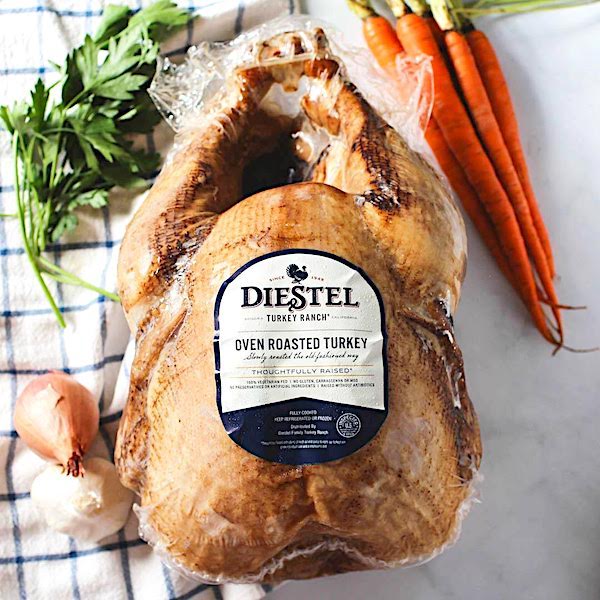 You want them cooked? Diestel's got 'em. You want to cook them yourself? They've got those, too.

And when it comes to Thanksgiving dining, a turkey is as traditional as jack o’ lanterns on Halloween.

And when it comes to acquiring turkeys … well, what of it? You’re going to cook up a big tasty bird yourself, where are you going to get it?

We remembered last summer, when we were happily nomming on homemade sandwiches of Diestel sliced turkey supported by an infrastructure of H-E-B baguettes. We remembered, and we wanted that sort of turkey goodness again – in whole bird form – and so we turned once again to that family farm out in California.

Because, mirabile dictu, they’ve also got whole turkeys. They’ve got thoughtfully raised birds, brought to market with progressive farming methods that yield juicy and tender turkeys of mouthwatering flavor. Their non-GMO and pasture-raised and organic American heirloom turkeys are sold at Whole Foods Markets and other natural food stores across the country – and their more petite birds, perfect for an intimate feast, are available straight from the farm.

Just, you know, a traditional, oven-roasted (or ready to be oven-roasted by you) turkey to make your Thanksgiving more like something Grandma would recognize.

We suspect our own grandma, had she been alive to see it, would’ve chuckled at the clumsy maneuvers we performed in attempting to cook our first big bird – a trial run, like, before we do it all over again for visiting family next week. Luckily, the Diestel 12-pounder we procured had simple cooking instructions printed right on its wrapper. And, though we realized too late that we had no roasting pan large enough to accommodate the flavorful corpus of that happily raised avian, we made do with an old wok we’d stashed in the garage months earlier.

Put the whole damn thing in the oven, per those Diestel directions, and, three hours later …

Gotta say: Maybe it’s because this was Brenner’s First Turkey, because we did it all by ourself? But we can’t recall ever having a more rewarding turkey-eating experience. That was two days ago, mind, and now there’s just a few shreds of tender breast meat left for sandwiches, and only one of the giant legs remain, and –

“Succulence, thy name is Diestel!” isn’t that how Shakespeare would’ve put it?

We don’t know: We’ve never met the Bard. But if we did, like via a trip in the TARDIS or something? And we wanted to honor him with a decent feast, regardless that his people didn’t do Thanksgiving? We’d cook him up one of these fine birds from Diestel. And let Kit Marlowe eat at McDonalds instead.