Pleased to Meat You

Well of course and right up front we’re going to note that, if you’re looking for fresh butchery right here in town, citizen, you’ll be wisely visiting Dai Due or Salt & Time, or heading a little north to Nolan Ryan’s Goodstock in Round Rock.

Not to mention, even, the meaty goodness available at Central Market or H-E-B.

But – while also tipping our hat – a sort of bargain-basement trilby, atm – to that hardcore Jess Pryles who certainly knows what to do with an edible animal – we’re gonna give a shout-out to five different companies that do things with meat that … well, that our palate has become quite fond of, shall we say? Tasty things. Convenient things. And – 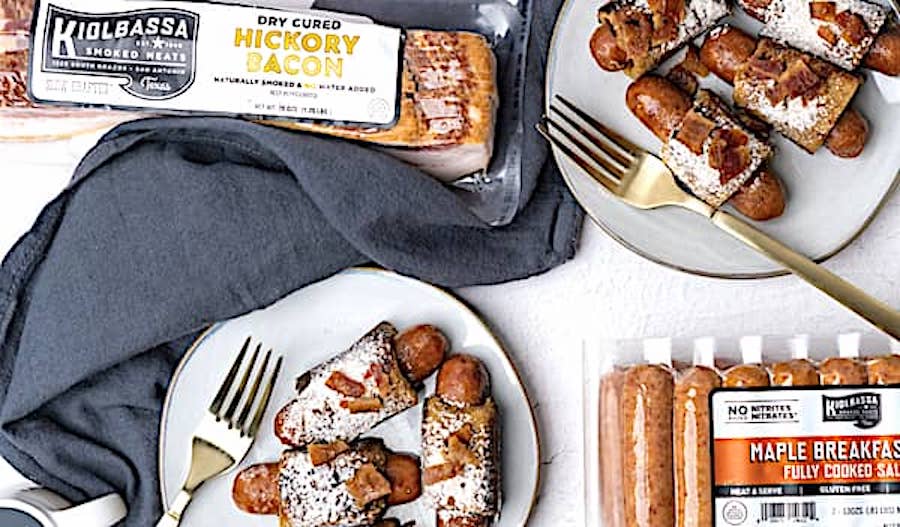 KIOLBASSA SMOKED MEATS
That’s not kielbasa, the meat, but Kiolbassa, the man. Rufus Kiolbassa, the company’s namesake, who was a meat salesman during World War II. Whose grandson Michael Kiolbassa is now the head honcho, running the longtime business down in San Antonio. “Since 1949, the Kiolbassa family has been devoted to the time-honored tradition of hand-crafting sausage and bacon the slow, authentic way.” Right? And we’ve recently sampled these Kiolbassa products, so now it’s a matter of science, of empirical data: That “slow, authentic way” of theirs? It results in a fine bacon – thick-cut, hardwood-smoked, just the stuff to complete a classic breakfast – and an even better sausage. Because Kiolbassa does sell kielbasa, after all … but we’re specifically talking about their breakfast sausages. Because we’re kind of obsessed with breakfast, tbh, but also because this is tailgate season, right? And we’re finding it hard to imagine a tailgate party that doesn’t include some of Kiolbassa’s fully-cooked maple breakfast links. In the middle of the afternoon or early evening, say, after your team has either done you proud or brought you to the depths of despair and, either way, you just kind of want to sink your choppers into something good? Yeah, you know – and so does Kiolbassa. 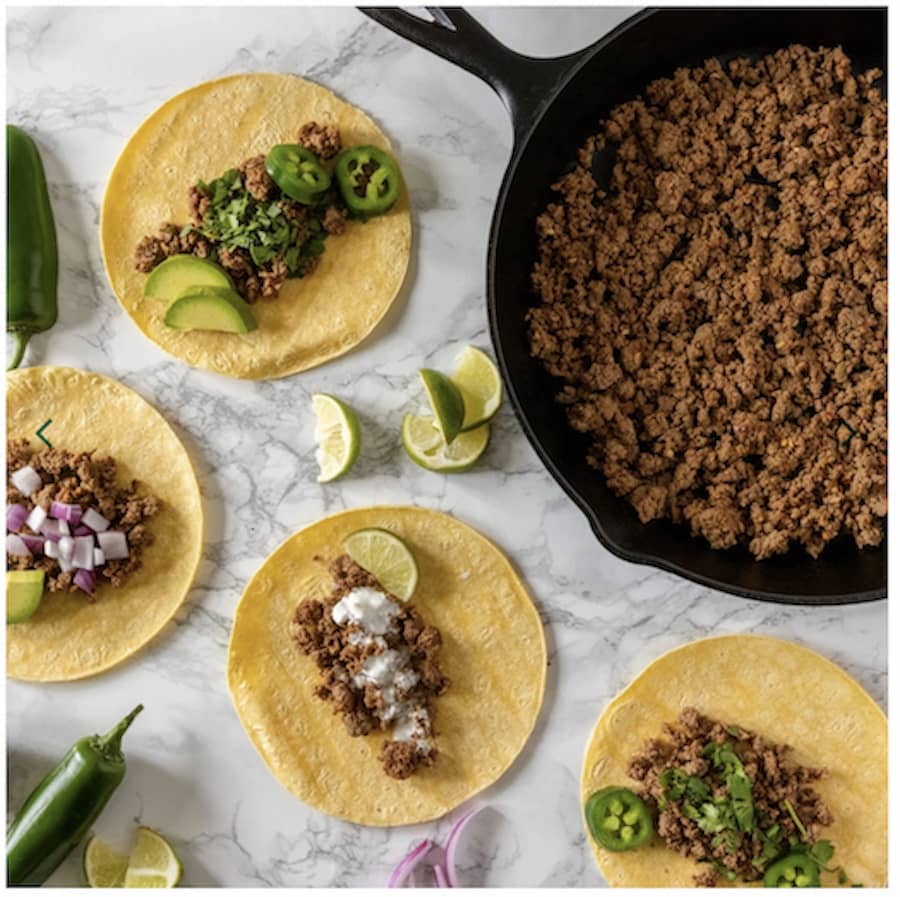 WAGYU BEEF CHORIZO
You know what today is? If it’s still Thursday, Nov. 11, then it’s Veterans Day. And the KC Cattle Company out of Missouri is a veteran-owned and run business – started by a man named Patrick Montgomery, to continue serving those he served with as an Army Ranger of the First Ranger Battalion. Montgomery’s goal is to mentor and employ veterans, to honor his brother-in-law who was killed in action in 2011. But, more to the point of this round-up, Monty’s other goal is to create delicious meat products – like, for instance, this wagyu beef chorizo. Now, you might be accustomed to chorizo in your wake-up tacos or alongside your eggs – because, like your current reporter, you also live in Texas and are just a tad obsessed with the whole breakfast thing. But I’ll suggest that an equally good use of this wagyu beef chorizo is … chili. Because, you take your favorite chili recipe, and you sub this wagyu beef chorizo in place of whatever your usual meaty grind is, and you’ll be eating even happier. (Tangentially, if you dislike kidney beans in particular, you might want to avail yourself of Brenner’s recent trick and toss in a can of “borracho” pinto beans instead. They’re available at any H-E-B, of course, and they’ll team up with that KC Cattle chorizo and the other ingredients, and your chili will be like something Guy Fieri might’ve cooked up if he’d been working the chuck wagon along the old Chisholm Trail. Straight out of Yumsville, brothers and sisters – although that Guy would’ve probably said Flavortown.) 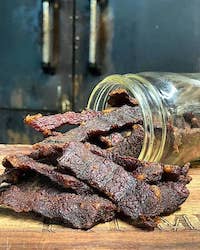 ABBEY ROAD’S JERKY
Sound familiar? Yeah, we’ve mentioned this meaty miracle before, when it was being hawked under the Brothel Sauce Co. moniker. And yet here it is again – albeit differently branded – because the more jerky we try, the more we discover that what’s being cooked up by a woman with the delightful name of Abbey Road at Coupland Dance Hall is rarely matched and never surpassed. There are so many jerkies out there and so little time, you know? And yet this remarkable Texas-based delicacy is *chef's kiss*. The rich, natural flavor and perfect texture, the thick – ah, we’ve already provided you with that link for clicking to on our previous ravings, so we won’t belabor the point again. 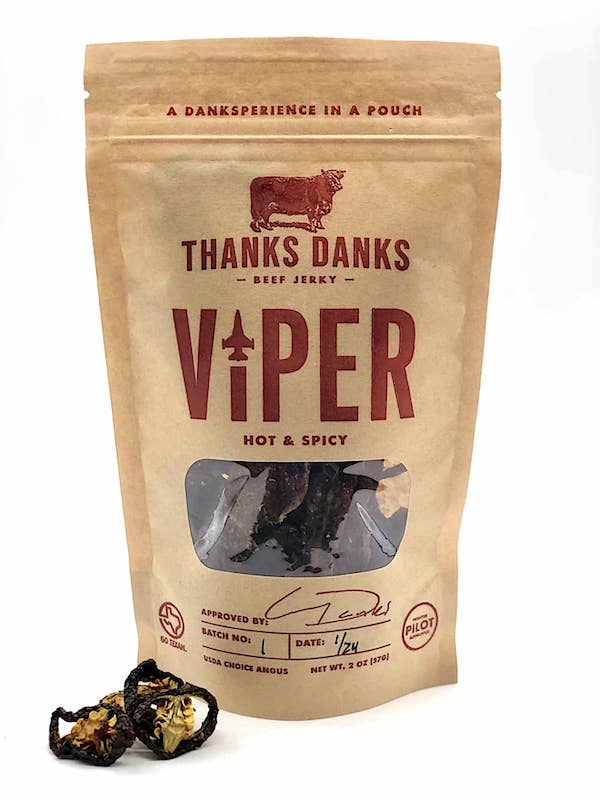 THANKS DANKS JERKY
Okay, this was a surprise. It was a surprise, because we didn’t even know about Danks until we were given a tour of that new PREP ATX commercial kitchen complex over on East Anderson – and Thanks Danks is among the many local companies in that burgeoning space. It was another surprise to learn that, hey, Danks Jerky? It’s one of the rare ones that actually achieve the high level of quality reached by Abbey Road’s brand – the only big difference is in the thickness of the strips, really, with Danks being less of a toothy mouthful. And – three more things: 1) Danks is made right here in Austin. 2) It has nothing to do with CBD or weed or anything; Danks is, mirabile dictu, the actual name of the family who make it. 3) Their Viper variety, infused with a variety of peppers, performs that tricky balance between not enough heat and too much heat. For those who want a hot & spicy sort of jerky, but who aren’t among our planet’s chest-puffing Scoville daredevils, this Thanks Danks Viper is your huckleberry. 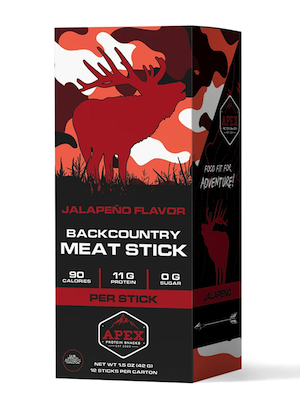 APEX PROTEIN SNACKS
Oh, here’s yet another surprise – although this one’s not from around these parts. No, this one – like that wagyu beef chorizo from KC Cattle – is from Missouri. And it’s, what, a meat stick? Like those Slim Jims you buy at the convenience store when you’re on the start of some road trip? Yeah, no. These Apex Backcountry Meat Sticks in particular are Slim Jims the way the Grand Canyon is a bigger-than-usual arroyo. Each tasty, chewy length of elk meat (yes: elk meat) is nine inches of good reasons not to be a vegetarian. Also: 90 calories, 11 grams of protein, and not a trace of sugar. We’re especially enamored of chomping on the jalapeño-enhanced variety, even though we’re not extreme pepperheads, because they’ve got just the right amount of heat to remind us that the plant kingdom can also be fierce. And, look: The end of the year is coming up fast, so you know where these Apex meat sticks are going? The jalapeño or the teriyaki flavor or the others? Besides stashing them in our backpacks and travel kits and bug-out bags, we’ll be adding them to the Christmas stockings of everyone we actually like in this world – and we know that, after they’ve had a few bites, they’ll like us even more.