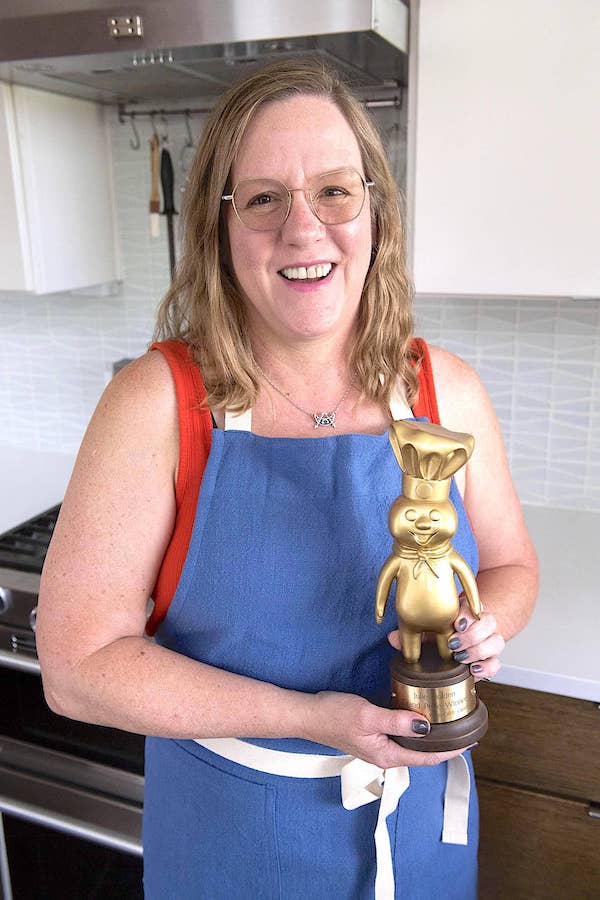 Yeah, the winner of this year’s Pillsbury Bake-Off isn’t playing it close-to-the-apron with her feelings.

“I was completely floored when they told me I’d won,” says the local foodie and fine arts aficionado. “It’s quite an honor, it feels totally unreal. It’s – ” her smile is off the charts “ – it’s really freakin’ cool!”

And what did this happy Holden win with? She won with her Sugar Cookie Skillet Pancake.

And what the hell is a Sugar Cookie Skillet Pancake?

We mean, c’mon: It’s a big pancake … that’s also sort of a sugar cookie … that’s made in a skillet. Just like the name says. But – how did Holden conjure this doughy, literally award-winning confection in the first place? And what prompted her to enter the 50th Anniversary Pillsbury Bake-Off?

“MasterClass had a really big sale right after COVID hit and everybody was staying at home,” says the affable baker, “so I bought a year of MasterClass and watched a ton of videos. So I spent the last 18 months doing a ton of cooking. And – this is fascinating to me, and I wonder if a lot of people, a lot of homemakers have had a similar experience? – where, right when everything shut down, sourcing stuff was tricky. And I got into this mode, almost immediately, where I was running, like, a little three-person restaurant for me and my husband and my daughter.”

Holden smiles, thinking of it.

“I had a list that I typed up that had all of the potential foodstuffs that I’d need,” she continues. “Like, here are the fruits, here are the veggies, here’s the bread products, et cetera, et cetera. And I would plan meals a full week in advance, you know? One full week – so I could get the curbside order together. And, if you remember, curbside was also, it might be a day or two, maybe three days, before you could get a spot? And by having this limited-staple list of stuff that I was pretty confident I could get – I mean, I bought a file folder, I got all my recipes together, I got super-organized so I could continue to feed my family. I’ve always been the cook in the family, and I didn’t want to stop, and people were freaking out about everything anyway, so I needed to cook. And I guess I just got in the habit of recipe-planning and meal-planning five days to a week in advance. And it turned out that I really enjoyed it! Like, all of a sudden I was the most important person in the family! I went from being The Lady Who Cooks Dinner to The Lady Who’s Obtaining Food For Us To Survive On And Cookin’ It Up.”

Sound familiar? All that personal culinary activity going on in shelter-in-place homes across the nation, baking-focused companies like King Arthur Flour and Texas’ own Barton Springs Mill doing the briskest business they’ve ever known, everybody yakking on Zoom about their sourdough starter and so on? Holden remembers. Holden remembers, especially, Dutch Babies.

“At that time, a lot of people were baking,” she says, “and a really popular thing among my friends was to make a Dutch Baby. Everybody was makin’ Dutch Babies. There were Dutch Babies all over my social media feed. Like, ‘Hey, wanna see my … Dutch Baby?’ And I’ve cooked a lot of Dutch Babies, and I also researched how to make a good one. Because they're not all equal. You can find things online that are like, ‘Why isn’t my Dutch Baby rising?’ And the science behind it is very interesting: It doesn’t have any baking soda or baking powder in it. What happens is, you put the flour and stuff in the blender, blend it up, and then you’ve got to set it aside for about ten minutes and let the gluten form. And you get your cast iron skillet really super-super hot, pull it out of the oven, throw in some butter, throw in the batter, put the skillet back in, and – it’s steam that makes it rise. No leavening agents, just steam. And some of them puff up a lot. Of course, they fall the minute you take them out of the oven, but they have all these wonderful crevasses and caverns that, if you put cool cream or ice cream on top of them, well, you know. They can be very showy – and yet they’re simple, and it’s a very old recipe.”

But Holden didn’t win this latest Bake-Off with a Dutch Baby. Well, not precisely. Although that is what inspired her …

”I kind of entered on a whim,” she says. “In June, I looked up the Pillsbury Bake-off, which usually happens around that time – and, sure enough, there was a deadline coming up really soon. And I was like, ‘Oh, shoot, I’ve been doing a lot of cooking – I wanna enter!’ And the entry is your recipe, a maximum 2,000-word essay, your list of ingredients, and I forget what the fourth thing is. But this time they wanted an essay on how cooking or baking helped you during the pandemic. Like, what are the positive feelings you have around the recipe and making it during this difficult year? And I immediately thought of Dutch Babies. So I went through the list of potential Pillsbury products that you could use, and I saw that one of them was sugar cookie dough. And I was like, ‘Oooh, that stuff is usually pretty stiff.’ But then I read some of the product reviews, and some of them complained that the dough was runny. Like, you’d cut it, and if it was warm at all on the day you were making your cookies, it would spread all over the pan? And I was like, ‘Well, I need runny dough for a Dutch Baby type of thing …’”

So she got the dough?

Holden nods. “I went and bought some Pillsbury sugar cookie dough. And I cut one of the dough tubes in half, left it on the counter to get nice and room-temperature, squeezed it into a blender, threw in some extra flour and other things, blended it up and then let it sit for ten minutes, and then poured it into a skillet. And that was it. It doesn’t rise like a Dutch Baby, so it’s not an actual Dutch Baby.” 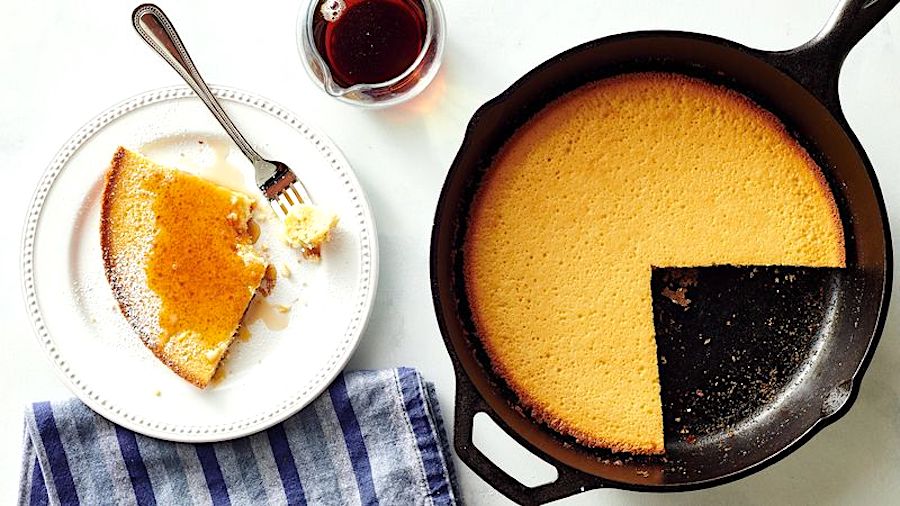 “Pillsbury is calling it a Sugar Cookie Skillet Pancake,” says Holden. “And it’s delicious. I mean, I didn’t re-invent the wheel or anything, but it’s really good. It doesn’t really rise, but it puffs a little, and the ultimate result is: It browns nicely like a cookie along the edges, and the Pillsbury dough gives it a really dessert feel.”

So, maybe for breakfast, like a pancake. But definitely as a sort of dessert?

“Oooh, you know what it’d be good with?” Holden grins. “It’d be real good with some homemade cardamom ice cream! And some, I’m thinkin’, fresh blackberries with sugar.  Yeah, and maybe some – just a teeny bit of – lavender.” She grins bigger, nodding. “Yeah, yeah, that’d be good.”

And what does this crafty and clever woman win as the grand prize of the 50th Anniversary Pillsbury Bake-Off? Is it, as in years past, tens of thousands of dollars and a custom kitchen makeover? Maybe a one-on-one, in-person, flour-dusted, dough-inflected MasterClass session with Gordon Ramsay? A brand new car?

“I don't get any money,” says Holden, smiling nonetheless. “But I knew, going in, that there was no cash prize this year. Because you have to read the rules, right? Because when you enter, you have to, you know, you’ve got to use an ingredient off of this list, you can’t use any more than this number of ingredients, it has to be limited to this amount of time.  And I’m a rule-follower, so I was aware of all that. And I didn’t enter to win money; I entered because I thought it would be fun – and it is fun! I get this trophy – ” she hoists a big, gold-looking statuette of Pillsbury’s Poppin’ Fresh Doughboy mascot – “and I get the braggin’ rights. I mean, hey, I won the freakin’ Pillsbury Bake-Off.” She looks at the statuette like some ingenue regarding her first Oscar. “It’s really such an honor,” she says.

And of course Holden – and her husband John, and her daughter Johanna – and all the rest of the dessert-loving world – now we get to eat those Sugar Cookie Skillet Pancakes, too. And maybe, with perhaps the faintest trace of culinary nostalgia, an occasional Dutch Baby.