Are nondairy milks just for the lactose-intolerant?

You already know that the answer to our questioning sub-headline is “No.”

Because that’s how such obvious journo provocations work, yes … but also because you’ve actually tried one or more of these milks made from various nuts or whatever, and you’re aware that such milks can be worthy in and of themselves, right? 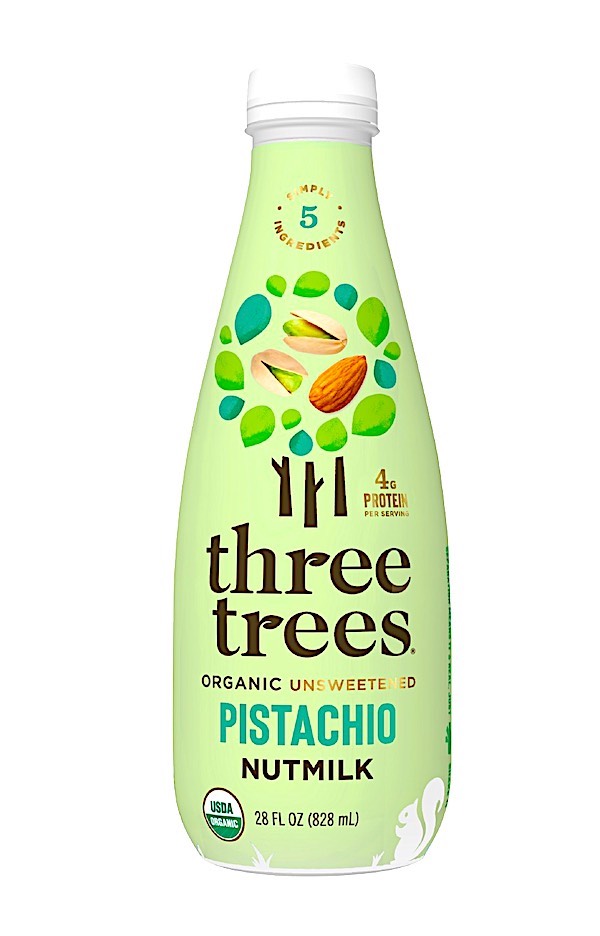 Appropriate, to start off a series of three with a company that’s got “Three” in its name. Appropriate, as well, to put something in your body that’s organic, unsweetened, and not tainted by any preservatives – and Three Trees has precisely that, in a variety of flavors. Not added flavors, mind you: There’s none of that tricksy shit going on at Three Trees – it’s all just the natural taste of the basic ingredients.

Now, what first drew us to Three Trees – beyond the lovely graphics and the simple ingredients and the already-bottled-and-ready-to-swig convenience – was the promise of a Pistachio Nut Milk. Because we’re, uh, nuts about pistachios, tbh, and so we were pretty excited to give the Three Trees version of pistachio milk (not a common flavor in the market) a try. It was pretty good, too, was our verdict – but we were disappointed. Why we were disappointed might be why you’re not disappointed: The pistachio version presented a mild, almost neutral flavor, like it could be any tasty nut milk. Which is fine, sure; but we’d been hoping for something more like the extreme flavor of some ice-cream parlor’s over-the-top pistachio milkshake, you know? Because we’re not drinking these milks for reasons of health, but for reasons of deliciousness. So, yeah, okay: It’s, ah, another decent nut milk. *mild shrug*

On the other hand, the other Three Trees milk we tried, the Oat & Seed variety? For the win! We’ve already spieled, in an earlier round-up of chocolate products, about how oat milk in general seems to us the closest to actual animal-lactated milk, and how it’s supremely enjoyable beyond any comparison. We’re also much enamored with the taste of sunflower seeds, and this Oat & Seed milk from Three Trees, in addition to its organic gluten-free oats, organic pumpkin seeds, and organic flaxseeds … also contains organic sunflower seeds – and there’s a wonderful flavor of them coursing through the excellent mouthfeel of this oaty milk. Ice-cold on a late summer’s day – or, we imagine, warmed up in the depths of winter, when winter’s here – this is just what we want a tall glass of in the midst of work or relaxation.

And of course Three Trees also sells almond milk, because that’s the biggie among nut milks, and they even have a Black Sesame version of that nondairy staple. And – well, you can always click to their beautifully designed website to learn more, right? 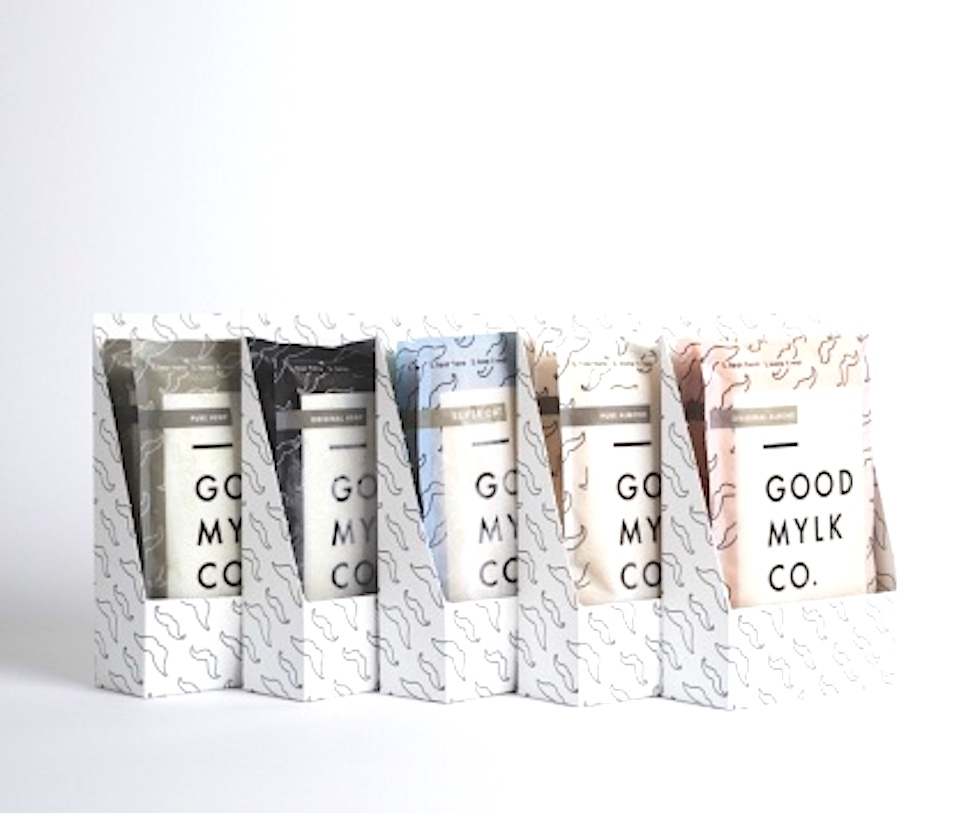 Who knew, though, that raw hemp seeds taste like sunflower seeds? Not us, until we tried the frozen-fresh Hemp Mylk concentrate from Goodmylk. And then we did, and we were like, okayyyyy, this is great – with nothing more than raw hemp seeds, dates, alkaline water, and salt – and we can keep all these handy packs in the freezer, for mixing up whenever we want that sort of refreshing treat? That’s another win – especially because Goodmylk also has a fine variety of flavors and formats (check it out: ceremonial matcha latte powder) for making your daily beverage intake an exercise in culinary enjoyment.

Now, it’s a bit much, we think, that the company refers to the salt in their ingredients list as “ancient mineral salt,” because (we humbly wonder) so what? All salt is a mineral, FFS. And, like, if there’s a pinch of sodium chloride that was rezzed in a laboratory yesterday, but it’s pure salt and it does what salt is supposed to do … why would that be a lesser thing than salt that was dug out of some mine from where it’s been sequestered for centuries and redolent of who knows what other sort of earthiness? Except that the very words get a certain subset of consumers all excited because “ancient” and “mineral,” ooooooh, how authentic, right? Almost as progressive as donating to your favorite NPR station after you’ve recycled a paper Save The Whales straw, right?

Will they next be boasting about how all the water they use is, omg, liquid?

Just wondering out loud here. And thinking that Goodmylk needn’t overplay their hand like that: their array of nondairy milks are spot-on for thirst-slaking and enhancing recipes and so on. Also? We really like those bottles they sell, too. So, c’mon, Goodmylk: Be cool, okay? 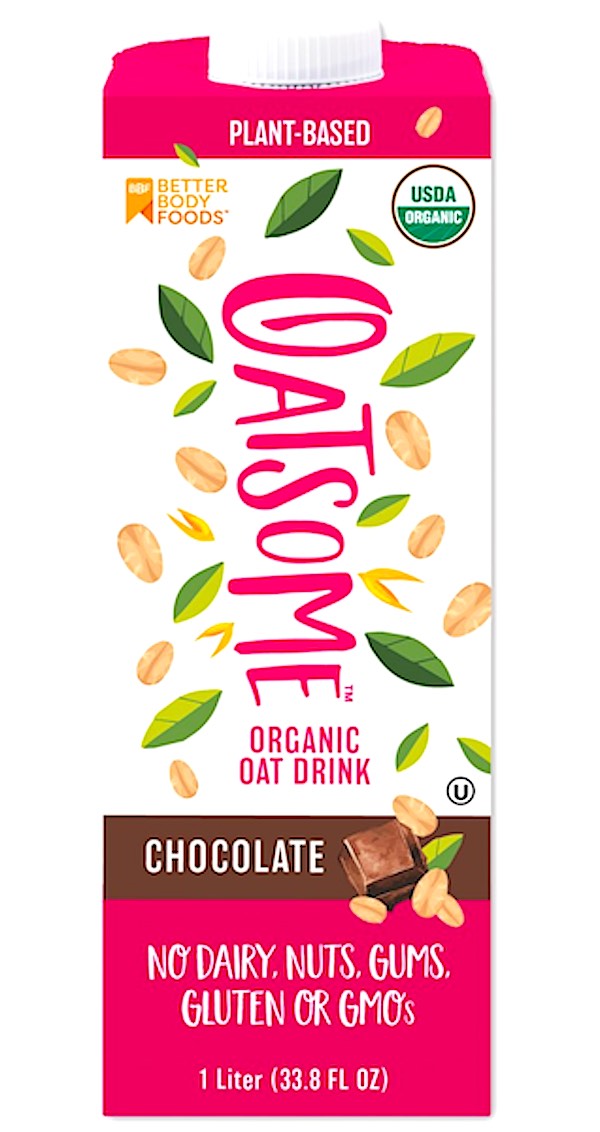 Yes, we referenced it already. And, yes, oats aren’t nuts at all, are they?

But then, two things:

1) Even the big daddy of nut milks – almond milk, as we also mentioned above – isn’t a nut milk. We mean, sorry, baby; but, “despite their common label, almonds are not true nuts (a type of dry fruit) but rather seeds enclosed in a hard fruit covering.” So, if those seeds can be called nuts (quite the way that the Catholic Church, pretzel-logicking their way past their own Lenten restrictions, declared that beavers are fish), then we can call cacao beans nuts, and –

2) – we were speaking of the cocoa-rich Oatsome chocolate milk in particular, see? Which, if you have a lactose intolerance but are looking for that particular flavor and don’t want to be disappointed? Then Oatsome is definitely your, heh-heh, huckleberry. Also, nota bene: Oatsome is basically a glass of yum no matter the flavor.