Covid-Positive Abbott vs. ATX, an Abundance of Tiny Pies, Farmhouse at Roughhouse, Boozy Bunkhouse Bargains, and More Things Without the Word 'House' In Them

Here's some of what's happening in Austin's culinary scene, as wrangled from numerous PR releases, official posts, words on the digital street, and even the occasional (verified) IRL eavesdroppings.

Yes, it's your Food News Buffet for the fourth week in August, Year Two of Our Plague … 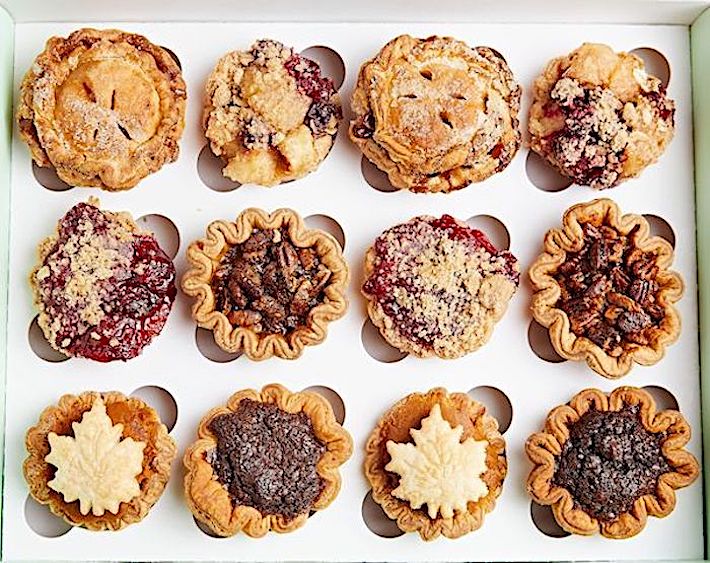 Yes, those tasty Tiny Pies are a-coming to Lakeway soon

It’s true: Those excellent restaurants Launderette and Fresa’s tried to protect their workers (and the community in general) during this upsurge in the Delta variant of Covid-19, by requiring guests to show proof of vaccination if those guests wanted to dine inside. But the TABC, perforce following the orders of Texas’ duly elected governor, were like, “Nuh uh – that’s illegal now. If you require that proof, we’ll gank your liquor license so fast it’ll make your ass fall off.” And we hear Hotel Vegas got the same, uh, warning. As did others, probably, but – look, did you “duly elect” that gormless eedjit? Stop, OK? Just stop. And even if you’re wisely vaxxed, citizen, please mask up. And see our deeper coverage of such pandemic shenanigans elsewhere in this issue.

Oh, and what is up with Johnson’s Backyard Garden lately? Good question. Some sort of, ah, we believe the technical term might be “apeshit clusterfuck,” is that right? In any case, we’ll let you know more as soon as we find out.

In much happier news: Tiny Pies, the makers of Austin’s original handheld pies, are opening a pop-up shop in Lakeway, set to open in August 2021. The store, located at 2125 Lohman’s Crossing #402, will remain open throughout 2021 (including the busy AF holiday season, yes) with the goal of turning into a permanent location. Note: “The store will also offer take-n-bake pies that are perfect for stocking the freezer for last-minute dinners or guests.” Addendum: If you don’t have any last-minute guests right now, give us a ring, we’ll be right over.

So, full disclosure, Tacodeli had a bunch of journos over to their place on Burnet Road last week, to test-drive their

We told you about the locavore goodness of Farmhouse Delivery a while back, which only primes the pump for this lovely news: That Farmhouse crew and Three Six General and The Salumeria are hosting a Farmers’ Fair at Roughhouse Brewing on Sat., Aug. 28, noon-4pm. This festive fair will include a variety of local vendors, live music, and more, out there in San Marcos where Roughhouse concocts its thirst-busting quaffs. Bonus: One free draft beer and $20 off your first order if you sign up for Farmhouse Delivery at the event. Pro tip: See if you can score one of Matti Bills’ incredible Farmers’ Grazing Boards. 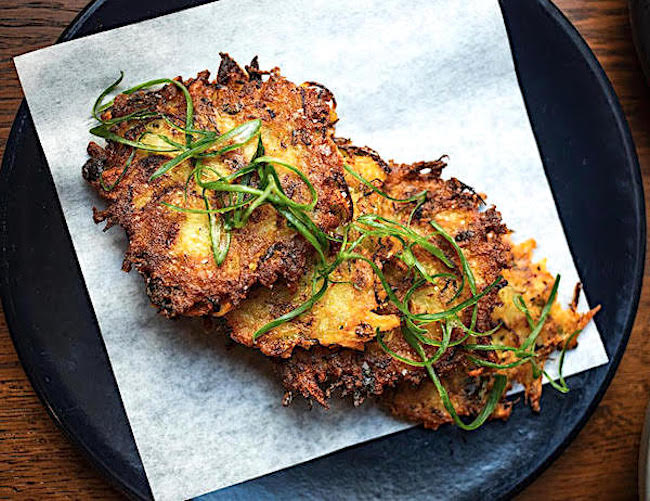 There's latkes, and then, ooooh, there's latkes. These are from Aba, of course. (Photo by Christina Slaton)

Quickly, now: Austin Mediterranean restaurant Aba is offering dinners-to-go for Rosh Hashanah, and you can place orders through Sept. 5 for picking up on Sept. 6 or 7. (You see that photo to the right? That’s Aba’s Potato, Brussels Sprouts, and Parmesan Latkes, to give you a little example of what’s available.) … The Bunkhouse group of hotels is supercharging its happy-hour bar offerings as summer ends, with the Hotel San Jose and Austin Motel bringing daytime bargain sips and tipples on Mondays, Tuesdays, and Wednesdays, and the Carpenter Hotel following suit every single day of the week (we mean Mon.-Fri, yes, not the weekends) … Miami-based chain The Salty Donut rolls into the ATX all bricks-and-mortar at 2000 South Congress on Friday, Aug. 27, offering 1) a plethora of omg-so-delicious flavors of fried bready toruses and 2) a new alternative for any Voodoo or Gourdough’s haters (you know who you are) among the local populace … You know that Mr. Gatti’s line of pizza parlors (and those dynamic Gattitown arenas of lucky children’s birthday parties)? Well, we just recently learned that the company started right here in Austin. We learned, because they mentioned that fact, recently, while announcing that they’ve gone and bottled their popular Buttermilk Ranch Dressing for retail sale in Texas grocery stores – with national distribution coming in 2022. Better watch your ass, Hidden Valley …

Now eat as well as you can, tip like it's going out of style, and watch out for those pesky ’ronas.