No, mein freund, you hold your beer

OK, so, that beerstein-holding contest out in New Braunfels?

Yeah, we’ve been running the ongoing listing in our Events section for a few weeks … 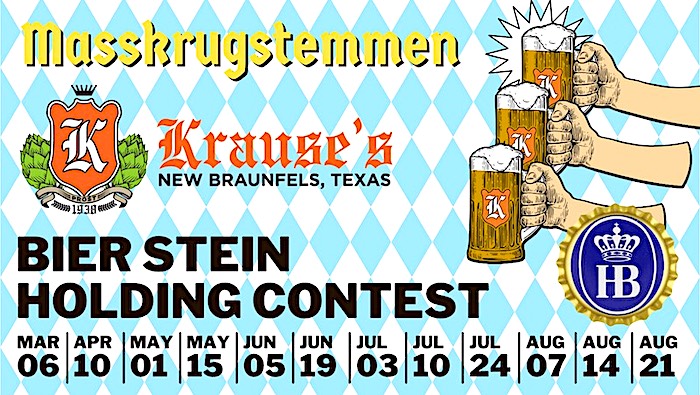 And now the battle is coming to an end.

The so-called Masskrugstemmen series of beerstein-holding contests at Krause’s Cafe out there in the old Germanic enclave near San Antonio has reached its sudsy terminus.

Two ultimate victors will be chosen – there are separate men’s and women’s competitions – and those victors will receive bigtime braggin’ rights and airfare plus a two-night hotel stay in New York City.

That final showdown is this coming weekend: On Saturday night, Aug. 21, all the winners from the previous weeks are invited back to compete for the grand prize. All those mighty men, all those wondrous women, doing their solid best to hold a filled, one-liter beerstein (approximately 5.5 pounds) at arm’s length, parallel to the ground, for as long as possible.

Tell you what: It’s a thrilling sight to see.

[Note: The night that your reporter visited, the women’s competition was won by someone named … Laurie Anderson. O Super(wo)man?] 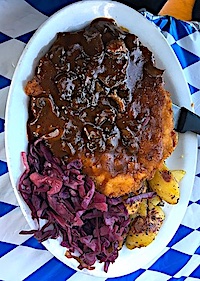 Yes, that Brenner [German for 'one who burns,' btw] took a photo of his delicious jagerschnitzel plate at Krause's Cafe for y'all to see …

But, listen, it’s not only the spectacle or the camaraderie that’s so enticing. Krause’s Cafe is home to the sort of German-heritage noms that make the city proud. The breaded schnitzels, the roasted potatoes, the sausages and cheeses and humongous pretzels and – you know, right? Delicious vittles that’ll stick to your ribs and make you consider moving to New Braunfels – or, who knows, maybe Stuttgart?

And, beveragewise? Whether you’re in the dining room, or on the big covered patio, or out there in the festive and shaded biergarten, the city of Stuttgart probably has more draft German beers than are on Krause’s extensive menu … but possibly nowhere outside Berlin has as many Texas drafts for you to enjoy.

And of course you won’t be in Berlin. Or Stuttgart. Or anywhere in Germany.

No, you’ll be in Texas’ own New Braunfels, at Krause’s Cafe, devouring some excellent jagerschnitzel (with mushroom sauce and a side of red cabbage) – or some other fine meal – and watching an array of brave (or adorably foolhardy) citizens trying, trying, s-t-r-a-i-n-i-n-g to hold their beer-heavy steins aloft longer than anyone else in the place.

Just figured you’d like to know about it, liebschen.