Cheeses on the Grill to Make this Summer Smooth and Creamy

Not grilled cheese, as in sandwiches, mind you; but cheeses for grilling. 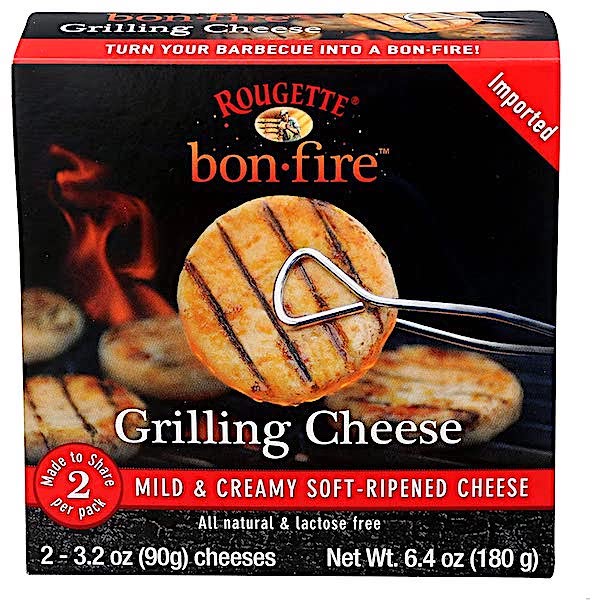 Well, yes: You could, certainly, place these cheeses, once grilled, between two slices of bread.

And, sure enough, that would be a grilled cheese sandwich.

But we’re not talking about that classic American sammich usually served up with a bowl of hot tomato soup by way of accompaniment. With maybe a pickle spear on the side, too, right?

No, we’re talking about Bonfire Rougette: Cheeses that are made to be slapped on the grill and brought to such a creamy apotheosis of flavor and mouthfeel that even kings and queens of old would’ve been damned lucky to experience it.

We’re talking about the latest offering from award-winning cheese makers Käserei Champignon, that 100-year-old, family-owned company in Bavaria, Germany. Because Champignon North America (you know: the folks who’ve brought us Cambozola for nigh on 40 years) is importing these Bonfire Rougette grilling cheeses into the States, which means we can get them right here in town – from the nearest Whole Foods, from now until October, yes.

And if you’re grilling at all, this year? If you’ve been inspired by the likes of Steve Raichlen, say, and you’re tossing, like, burgers and chops and chickens and taters and big slices of onions on that handy backyard rig for an early-evening garden party as the summer progresses or whatever? You’ll want to toss a few of these cheeses on there, too.

Sure, it’ll impress the neighbors – “Dude, whoa, you’re grilling cheese, WTF?” – but, more than that, it’ll make your taste buds think they’ve entered some smoke-inflected Paradise of Dairy-Based Yum. And you’ll get to share that sensation with your friends and family, too, you cunning culinary philanthropist.

Look: There’s two kinds of Bonfire Rougette available from Käserei so far. There’s the basic Grilling Cheese, a mild and creamy, soft-ripened round of goodness that cooks up with a crispy outside and melted insides; and there’s the semi-soft Marinated Cheese, coated with herbs and oil and sitting in its own ready-to-heat, ready-to-serve grilling pan.

We’ve tried both, and we’re giving them a hearty thumbs-up, but here’s our best trick: Take that basic round of cheese, set it above the coals until it begins to sort of crumple in the heat, so you know it’s getting real melty inside. Then set it aside, off the grill, for about 2-3 minutes. Then, put it — yes, the whole, delicious thing –– on top of a just-grilled burger patty. And put that culinary partnership into a nicely warmed bun, with just a little dash of steak sauce.

We mean, c’mon: This is why grills exist in the first place, isn’t it?