My post vaccination restaurant rebound hasn’t been the unending feast I dreamed about during a year of home cooking. I’ve dined on some patios where menus have been replaced with QR codes, but mostly I’ve optioned for trailers and takeout.

Painfully, I haven’t even slid into the booth at one of my hallowed Chinese buffets yet.

And I’ve almost completely forgotten about fast food since Taco Bell callously expunged the 7-layer burrito from existence and both Sonics in central East Austin suspiciously went dark – as if we weren’t entering the perfect season for a 44oz cherry limeade slushy. Smith’s there, in his trademark jean shorts, oversized sports jacket, and backwards hat – the latter a Mooby’s design with cow horns extruding out, cutting a ceremonial ribbon with giant scissors and taking photos with fans. The filmmaker’s presence wasn’t announced, but he’s usually present for the opening of a Mooby’s installation, of which there’s been 13, all produced by LA experiential dining wiz Derek Berry.

He admitted the Mooby’s pop-up experience, specifically as America continues to navigate a pandemic, is mutually beneficial for fans and his own need for “strangers to validate my existence.”

“For the audience, it’s like a little piece of normalcy. Normally I came though once a year, so they can say ‘Hey, he still kind of came though,’” Smith reasoned in a après ribbon-cutting interview with the Chronicle. “While they’re like ‘Oh my God, I’m stepping inside a Mooby’s,’ and ‘Oh my God, I’m eating a Cock Smoker' – that’s funny and shit,’ what I’ve got out of it was ‘They’re still there – right where I left them and they’ll be there when we come back and do a big show!’”

Smith, who annually spends hundreds of nights on stage, admits that being disconnected from in-person public performance over the last year has felt weird and left him jonesing for making real connections with his audience. The Mooby’s instillations, he said, fill that void just a little bit.

“If I’m not on stage singing for my supper, what the fuck am I doing? I’m not living off Clerks money – that’s long fuckin' gone, so at that point I was like, ‘Oh shit, financially I’m in a pickle,’” he explained. “What the Mooby’s pop-ups really came down to was the only way to have fan interaction in the real world… As much as the audience gets out of it, performers are parasitic in fuckin’ nature. It’s like a vampire finding a small child, [he mimics sucking blood from a neck] like ‘Ah fuck, that’ll do until I find an adult.’ So it was nice to reconnect with that energy.”

I’ve been wanting to eat at Mooby’s since 1999 when I watched Chris Rock eat an Egg-A-Mooby Muffin in Dogma. Locally, the temporary restaurant uses Wholly Cow Burger to churn out the menu items, which include the Cock Smoker Chicken Sandwich, a meet and vegan version of the classic Cow Tipper, and a Cow Dong Vegan Brat, plus Hater Tots and Onion Rings to Rule Them All. The veggie brat I ate was excellent as were the bonus chocolate covered pretzels – a callback to a fecal matter joke from Mallrats. 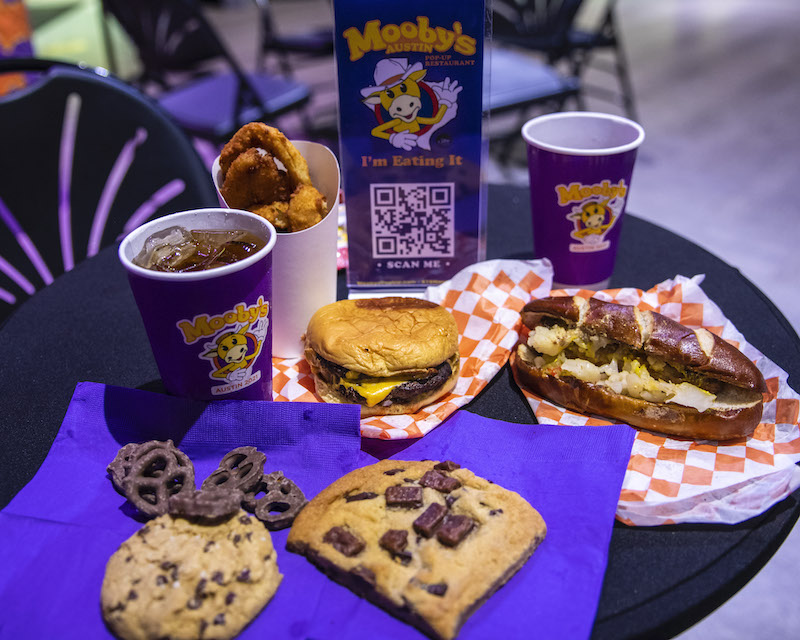 A Cow Tipper burger with Onion Rings to Rule Them All, a Cow Dong Vegan Brat, and two Mooby's Cokes, plus dessert. (Photo by David Brendan Hall)

Mooby’s vegan offerings, comprising half the menu, reminded me that last year I’d listened to a couple episodes of a podcast that Smith hosted with his daughter, actor Harley Quinn Smith, called Vegan Abattoir. I asked the director, whose been on a plant-based diet since having a “widowmaker” heart attack in early 2018, if he envisions a world where vegan and vegetarian items have a bigger place on fast food menus.

“I see it hitting the mainstream, even more than it is now,” he said, noting the popularity of the Veggie Grill chain in California. “You already see it in the grocery store – the section getting bigger and bigger and bigger. It’s also eventually going to be cheaper to make plant-based food. One day someone’s gonna figure it out, like ‘Oh my God, it cost x amount of dollars to run a Burger King or McDonald’s where you’re selling beef, which is a once living thing that’s dead and, even if you’re buying it bulk, there’s a real cost concern. Plant-based shit? You just grab a kumquat and turn it into a burger.”

Smith characterizes his daughter as a vegan recruiter, while he opts to be comparable discrete about his dietary lane.

“It’s choppy waters to navigate because if I tell someone ‘Oh I’m vegan,’ they’ll say ‘Fuck you, now I’m eating twice as much meat you piece of shit!’ I’m like ‘What the fuck? What vegan touched you? Sit down, let’s have a conversation.’ So I had to learn for a while how to communicate that I’m plant-based. I tell them: ‘This works for me.’”

3TEN hardly looked like a music venue on Monday. Twenty foot tall inflatable effigies of Jay and Silent Bob loomed over the patio, which also included a facade of the Quick Stop store from Clerks. Inside, tables and chairs covered the floor, a merchandise table took the place of the stage, and the walls and bar were done up to resemble the interior of a Mooby’s franchise. A 20ft screen on the far wall showed Jay & Silent Bob Reboot – a 2019 movie I strongly recommend getting high before watching. Order up: a future Mooby's employee of the month at 3TEN ACL Live (Photo by David Brendan Hall)

The pop-up hosts Mooooooovies at Mooby’s, screening Reboot on Thursday and Friday night – tickets are still available for the first showing.

“Short of necromancy, which I don’t have access to, I cannot bring my father back, but moments like this is as close as I can get: having a Mooby’s in the heart of Austin City Limits,” he said, confirming that he smoked a joint on the concert hall’s backstage patio, dubbed Willie’s Porch. “I grew up hating this fucking show. My father watched it every weekend.”

Asked if he remembers the moment he actually thought up the concept of Mooby’s, Smith pinpointed the reading of the Dogma script which had the characters eating at McDonald’s. His producer told him there was no way the fast food chain’s owners would allow use of their brand so he made one up, equally inspired by the then-popular children’s show Barney and the Disney empire. While filming, he recalled one of the film’s leads having an ominous idea.

“We were sitting outside. It was Linda Fiorentino, me, Jay (Jason Mewes), and Chris Rock, in between takes, while they’re reloading and we had time to chit-chat,” Smith retells. “And Rock was like ‘Somebody should do this. Somebody should make this place’ and I was like ‘Yeah, I wish.’ That was 1998, when we were shooting the movie. So years later, when Derek said ‘Hey you have a fake fast food joint, can we do this?’ I was like, ‘Chris Rock predicted this!’

“I never imagined it would do this,” he continued, raising his eyebrows. “Dream stuff.”