It’s cocojune, and it’s not even, you know, dairy-based …

By “reaching peak yogurt,” I don’t mean that the world’s supply of yogurt has reached its peak volume and it’ll be all downhill from here until there’s nothing left. 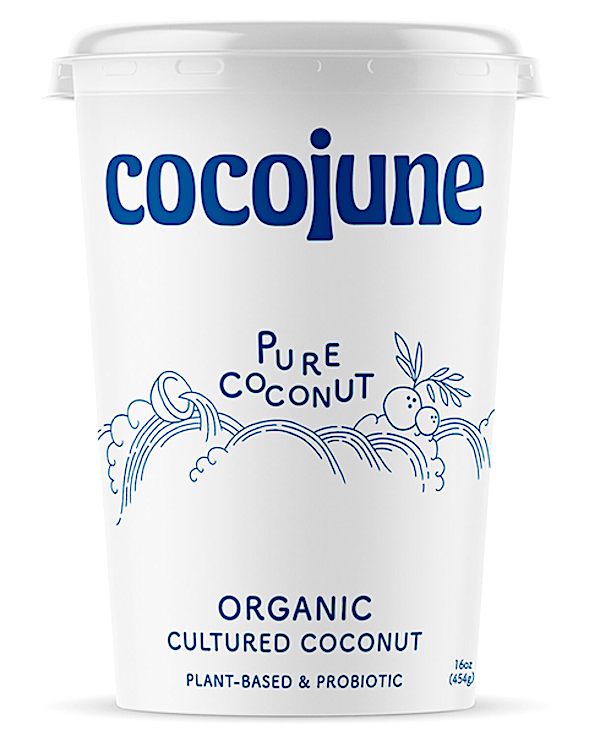 That may well be true, for all I know – I’ve not done any research about cattle or goat populations or international levels of ruminant lactation or the effects of climate change on yadda-yadda-yadda – but it’s not what I’m talking about right now.

Rather, I have recently been introduced to what I believe is the peak of flavor and healthiness in yogurt. And the stuff is also totally organic and – *gasp* – vegan.

Yeah, yeah – clutch those pearls, if you must.
I know I did.

Because, listen: I AM NOT A VEGAN.

In fact, I am what some folks who are, shall we say, extremely vegan … I’m what they might refer to as a bloodmouth carnist.

Because, holy Saint Anthony Bourdain, I love to nom on chunks of well-prepared animal flesh.

And me and dairy products – milk, cheese, ice cream, half-and-half for my habitual coffee, and so on, ad infiniyum – we’re BFFs since small times. And that definitely includes yogurt.

Also, as the Austin Chronicle’s food lieutenant, I’m always trying products that are attempting – with one degree of success or another – to replace dairy in this or that or some other thing. And, to one degree or another, sometimes these products fail, and sometimes they succeed. And even when they succeed, these no-dairy-where-dairy-traditionally-existed products, what they’ve achieved is only enough to make you say: “Okay, this is almost what I want, almost like the real thing, and I’d better keep eating it because the doc says I’ll likely die way too soon if I don’t revamp my diet along these new restrictive lines.”

You know what I mean?

Which is why I am nigh on freaking out about this cocojune stuff.

It’s yogurt, for one thing. Yes, it’s made entirely from plants – coconuts, to be specific – but it’s definitely yogurt. It’s soooooo creamy. It’s loaded with probiotic bacteria. Its flavor is *chef’s kiss* …

I mean, it’s not even a substitute, like for people who can’t do dairy. It can certainly function that way … but, listen, here’s the thing: This stuff is so good that you could eat regular yogurt every goddam day, you could eat the best dairy-based yogurts on the market, and you’d still want this cocojune. It’s not less-than, in any sense. It’s at least equal-to. And in many cases – bring on all your contenders and fight me – it’s greater than, strictly on a flavor-and-mouthfeel basis, to say nothing of the health benefits.

Srsly. This plant-based stuff, made up in New York by “ four friends who believe that dreamily delicious food and organic agriculture should be the norm,” is something you have to try.

No, no – have to, I insist, because here’s the final thing: Coconuts, right? And, often, food made from coconuts – hell, coconuts themselves – well, some people find it to be too much of a flavor. They don’t like coconut, end of story, right?

And that’s the final thing about this cocojune: The flavor is subtle AF. Not just in the enhanced varieties (like the Vanilla Chamomile, or the Lemon Elderflower, or the Strawberry Rhubarb, which are exquisite), but in the basic-as-it-gets, pure coconut version, this cocojune is like you’re eating some kind of heavenly whipped cream on an island paradise where you can smell the nearby coconut groves wafting their fresh aroma across the sand to you.

Even if my championing of this stuff lacks any subtlety whatsoever.

Because … oh, try it for yourself, why don’tcha? And it's available at Central Market, too.

cocojune, plant-based yogurt, it's so good we can't even