St. Patrick’s Day Could Chase the Snakes of Your Blues Away

Sorry, but we can’t even begin writing this post without thinking of that hilarious headline in The Onion back in 1999. 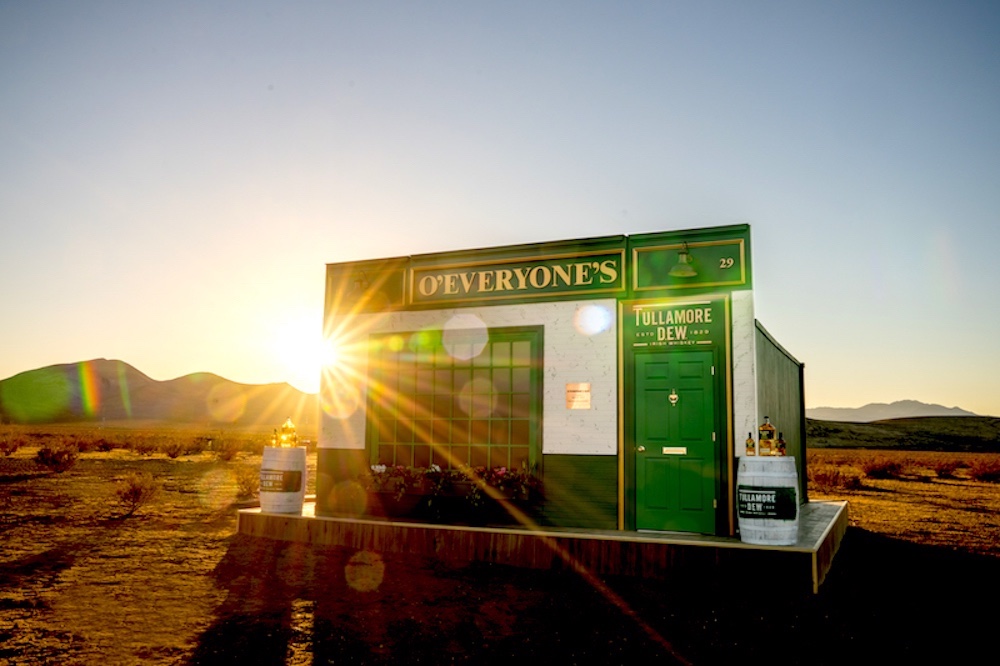 Okay, now that that’s out of the way …

Let’s hear it for the folks repping Tullamore D.E.W., as they’ve got that second-largest-selling brand of Irish whiskey in the world reprising its popular O’Everyone campaign this year by poking a little faux-adversarial fun at the Jameson brand of whiskey.

(Faux-adversarial, we say, because, while there might be interdepartmental grudges as exist in any big endeavor, of course Tully and Jameson, and probably even parent companies William Grant & Sons and Pernod Ricard, are frenemies at worst and BFFs at best – and long may all their waters of life flow.)

But the company has more tightly focused its might on California – which has the highest concentration of people named Jameson – and is challenging one resident there to legally change their name from "Jameson'' to "Tullamore” – in which case, that person and three of their closest friends “will be invited to spend St. Patrick’s Day in the world’s most exclusive and socially distant Irish Pub, built just for them, in the scenic plains of the Mojave Desert.”

(Srsly. Like, you know that Prada store out near Marfa? Kind of like that, but somehow more and less commercial at the same time … and simultaneously more and less artistic … a-and, wow, it’s like that whole Pavlov’s Dogs scene in Gravity’s Rainbow, where the canines’ responses start shifting over to the hyper-paradoxical, and Pointsman can’t get – okay, now we’ve lost you. Onward!)

So, if you’re not named Jameson, we figured this marketing gambit is still zany enough to make you smile (and we certainly don’t mind mentioning Tullamore D.E.W., especially as we’re geeky enough to know that it’s Lisbeth Salander’s whiskey of choice, too). And if you are named Jameson – and doubly so if you live in California – get on it, friend! Change that name, claim some swag, support the industry, and be, however briefly, a part of the true D.E.W. crew.

And, speaking of that fine William Grant & Sons tipple, you should know it's being featured at Austin's revered Roosevelt Room on St. Patrick's Day – with a Boilermaker special that brings a Guinness pour with a Tully shot; the return of "Private Eyes," the original RR drink created by Brandon Benitez for a Tullamore D.E.W. cocktail competition back in the day; and but also, on Patrick's watch, half off all Irish whiskey pours.

If you’ve even just heard about the savory wonders that acclaimed culinarista Gabrielle Faust is cooking up (for delivery to you all over Austin) on St. Patrick’s Day, you’re likely already drooling like Rick Sanchez of Earth Dimension C-137. But stanch that verdant flow, citizen, and simply click right here to scope the Guinness Steak & Irish Cheddar Pie, Shepherd’s Pie, Corned Beef & Cabbage, and more that’s available for your nomming pleasure. Note: You’ve got to order these goodies by March 13.

That’s right: At all Twin Liquors locations, not just the one within walking distance of the Chronicle. Also online. Great whiskey, solid discounts. Going on now and continuing through March 17.

Never mind the scientific discoveries on Mars or the frontiers of medicine, citizen, here's some really exciting news: La Colombe's first-of-its-kind canned Vanilla Draft Latte perfectly complements Teeling's flagship Small Batch Whiskey. The coffee’s vanilla flavor, it turns out, matches the sweetness found in the whiskey’s signature rum finish and fruit-forward notes, with the draft latte’s natural creamy character mimicking the frothy top on a traditional Irish Coffee, deliciously coating the palate with a depth that cuts through the whiskey’s non-chill filtered body. And now, just in time for this day when Irish eyes are smiling more than usual, limited-edition Irish Coffee kits are available exclusively at ReserveBar.com – as a gift with purchase of a bottle of that Teeling. Cheers, we say, to this classic combo of alcohol and caffeine!

Austin’s own Boozy Bites, “the world’s first premium edible cocktail company,” is releasing their new Peppermint Pattie Boozy Bite in time for devouring on the 17th. Well, you know we love anything that’s redolent of peppermint, pretty much, but, ah … what actually is a Boozy Bite, anyway? Is it a Jell-O shot sort of deal? Something like those stunning ziggurats of nervous pudding supplied by Bompas and Parr for last year’s Fusebox Festival?

Company founder Dee Dee Bryant is more specific: “They’re somewhat similar to gelatin shots. However, Boozy Bites are vegan, wine-based and 15% alcohol-by-volume. They come in elegant, petite champagne glasses with a stem that twists and pushes, like a modern-day push-up cup.” And, while they’re regularly available in flavors like Rosé, Moscow Mule, and Mojito, these new Peppermint Pattie ones (and a couple other St. Patrick’s flavors) will only be around for a while. (We mean seasonally, for purchasing. The bites themselves are shelf stable at ambient temperatures for up to 30 days and will maintain their form in temperatures up to 130F, but – ah, you know what we mean!)

This new Irish gastropub is opening (in Round Rock, at 4000 E. Palm Valley) on St. Patrick’s Day, perhaps the most culturally relevant date for an encounter with their kitchen (headed by none other than the award-winning Josh K. Watkins), whiskey-forward mixological program, onsite microbrewery, dedicated wine cellar, and outdoor beer garden.

The new place, founded by Sam “I’m originally from Belfast” Darlington and Jay Kudla, has an impressive array of things to recommend itself with, to be sure – but we’re especially anticipating what chef Watkins has going on. Listen: “Fig & Pig Pizza (topped with prosciutto, figs, gorgonzola, and arugula), the Count of Monte Cristo sandwich (made with Asadero, ham, Gruyère, Mornay sauce, and a sunnyside-up farm egg), and Rosemary Campfire Hoey Irish Stew, Texas Style (made with Angus beef, marble potatoes, heirloom carrots, and carrot top gremolata) lead the standouts.”

Oooooh, baby, yes. Because even this blessed day isn’t all about the drinking, right? And, on March 17, starting at 11am, it’ll also be about live music performances – including bagpipes, Americana band MoPac Traffic Jams, and Irish guitarist Daithi “Davey” Arwine.

This lot of Celtic celebrants (at 1905 Aldrich in Mueller) are bringing their St. Patrick’s Day party back, having shelved the event during last year’s initial coronapanic. Now the popular pub and restaurant will offer viewings of Premier League Football and rugby games bright and early – Liverpool takes on Leicester at 6:30am on Sat., March 13, for instance – as well as live music throughout that day and on March 17, with the usual wealth of Irish drinks and fare brightening the family-friendly venue.

Sure an’ we told you about this recently debuted Downtown watering hole (from Heather and Steve Potts, at Second and Brazos) in our latest Booze News & Views column …