Just a wee dram of What's Happening as March marches in …

What’s going on in the Austin-based world of alcoholic beverages? What’s good beyond this city and the rest of the state? Good questions, those. 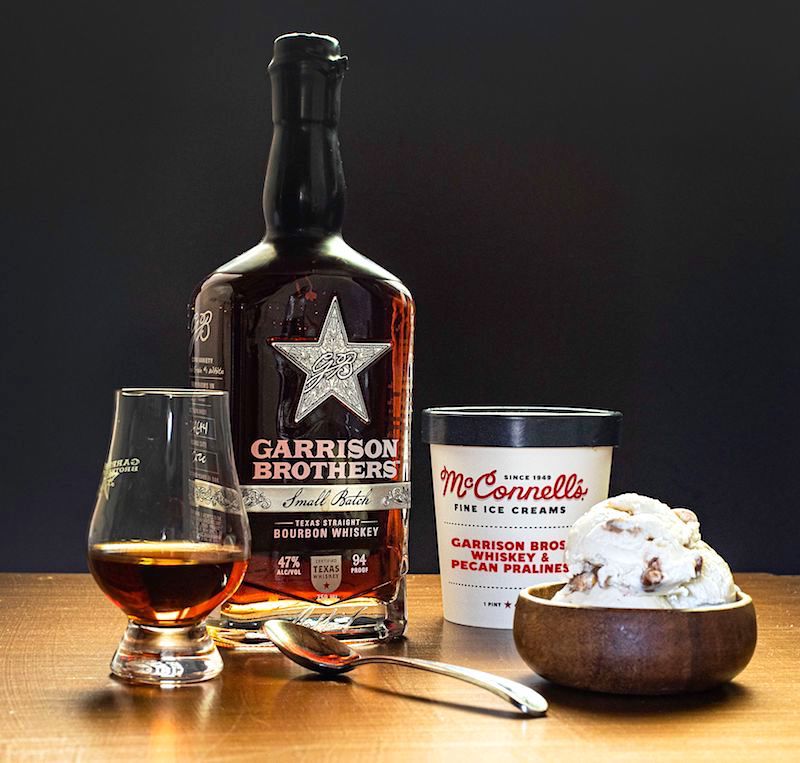 And this is not a regular column. This Booze News & Views is, as a certain Cookie Monster famously said about his ingestible of choice, a sometimes thing: It’s where we’ll answer those questions when circumstances have resulted in “Oh shit, there’s so many different items to cover at the same time.”

We told you earlier, with a tear in one eye, how the beloved Prohibition Creamery was shuttered due to this lousy pandemic. Now, as if in divine mitigation, we find out that the fierce spiritmongers out in Hye, Texas – those whiskey wizards known to mortals as the Garrison Brothers – have teamed up with McConnell’s Fine Ice Creams out of California to present Whiskey Pecan & Praline – their newest seasonal ice cream flavor, a cold and heavenly concoction featuring Garrison Bros. bourbon and Central Coast milk & cream, all studded with buttery, salt-roasted, caramel-coated pecans. So we’ve come full circle with this reportage – first shouting out Prohibition Creamery when the Garrison clan had a pop-up there in the Before Times – and in the middle of the circle is a dish of ice cream that, if you enjoy the sweet, smoky taste of bourbon and pralines, pretty much has your name on it, citizen. Note: The tasty stuff’s available for a limited time only, so get it while you can. Of course, when we think of those Garrisons, we also think of the Milam & Greene distillery out in Blanco, where – on Sat., March 6 – they’re having a Founder’s Day celebration, with whiskey tastings, cocktails, plenty of that fine Hill Country cookin’, and live music under their majestic oaks. (How about a little bourbon beef stew and some orange bourbon cheesecake to accompany your tipple, Texan?) But when we think of Milam & Greene, we also think of Treaty Oak Distillery. And when we think of Treaty Oak Distillery, we also think of Still Austin. And when we think of Still Austin – well, we might go on with mentally leaping from one distillery to the next, because there’s a lot of good ones in these parts, we’re glad to say … but, no. Right now when we think Still Austin, we stop there for a moment. Because food trucks, right? Like how a beer brewery will often have a remarkable food truck attached to it? Like how Treaty Oak has that full-fledged Alice’s Restaurant? Well, now Still Austin – over there in The Yard, near where the Tesla showroom is eventually going to be hawking the automotive bodies electric – now Still Austin has a dedicated food truck called The Bearded Baking Company, and our mind can’t get past the place. Because weekend brunching has seldom been so good anywhere in this town and chef Wes Dills’ biscuits-and-gravy, to name just one item, is hands-down the best goddamn biscuits-and-gravy we’ve ever had the pleasure to devour. And, oh lordy, that mushroom-and-black-garlic-and-brie croissant … and – yeah, we’ll tell you more about this, later; but, word to the wise, we wanted to give you a heads-up right now. 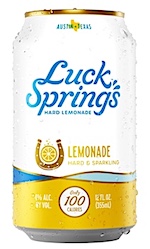 Luck springs eternal in the human breast, they say. Or, ah, was that hope? In any case, Luck Springs is the newest beverage brand from the Austin Eastciders team. It’s “their answer to overly sweet and less natural approaches to hard lemonade and tea.” At this juncture of marketing history, we’re pretty much saying “natural, shmatural, whatevs,” because everything’s made of one configuration of atoms or another, and we’re all starstuff and are all gonna die of something eventually, and we just don’t want what we swallow to outright harm us, right? But we totally get the whole “overly sweet” point, and we applaud this new beverage. But then, that’s why Eastciders impressed us in the first place – their ciders are always just sweet enough, without ever being cloying, and a fine refreshment indoors or under the big Texas sky – and we reckon these Luck Springs quaffs will be along that line of deliciousness. You can get ’em in these flavors: Peach Tea, Raspberry Tea, Lemonade, or Half & Half (that’s not a coffee correction, it’s black tea with a big splash of lemon to it). As much as we delight in pushing the good things that our own river city has to offer, we were nonetheless wowed by the pair of Colorado-crafted ciders we recently had an opportunity to try. Daniel Haykin runs the small-batch Haykin Family Cider company out in Aurora, Co., and they make a sparkling wine-like cider in an array of sweetness levels. “Elevating the apple like wineries treat grapes, we highlight the flavor and complexity of interesting and unique apples.” No – they really do. The Haykin business is predicated on heirlooms and an everchanging gallery of apple varietals, with tasting notes for each bottled edition, and with a sweetness/dryness chart (an accurate chart, according to our tastebuds) right there on each label. If you like cider at all, and especially if you’ve ever wished that apples got the respect so long afforded to grapes, this company of rosaceous glory is one you need to know about. On the other hand, we’re not saying anyone’s here to diss grapes. And, in fact, Nectar of the Vine – a family-owned company out of Burton, Ohio – is all about enhancing the wine that comes from grapes. Because, of course, there’s spirit-based cocktails and there’s wine-based cocktails, right? Listen: “To begin a new flavor, our mix starts with an all-natural cane sugar base. We then begin adding the raw ingredients, such as dried fruit flavor, and depending on the flavor, there could be up to five different dried fruit products in one mix. Once we feel the ratio is correct, we record the weights and amounts, and test it with the wine. We sample the flavor once it’s mixed and frozen … then collect all the comments from the taste-testers and start the process over until we reach the perfect flavor.” Which results in a variety of wine-based cocktails and, the really popular part, the company’s frozen Wine Frappes. Ginger limeade. Cranberry acai. Peach mango. Yeah, those (and more) are some slushy, flavor-forward treats. And it’s mostly wine, wine, wine for these Nectar folks – but there’s a frozen margarita blend that could equally rock the chardonnay or tequila. They also nod to the martini with a chocolate mix that could spike up vodka as well as it spikes the burgundy. Or maybe even mezcal? Oh, let’s look at that, next … Didn’t chocolate originally come from Mexico? Then we’re not barking up the wrong cacao when we suggest that mezcal might be just the thing for a further twist on the old shaken-not-stirred – because agave-based mezcal also comes from Mexico. And when it’s one of the IZO brand spirits, it comes from Durango, Mexico, specifically, under the careful guidance of Gaston Martinez. So maybe, if you’re gonna attempt building this cocktail, call it a Chocolate Martinez instead? In any case, when you’re looking for some well-made mezcal, whether for blending with Nectar of the Vine’s gambits of drink or in any mixological context, IZO is what you want to find. Smooth, smokey, redolent of sun-baked climes and nights of memorable indulgences, it’ll do your spirit-seeking senses right. And, yes, agave being a multivalent member of the plant kingdom, IZO also makes a fine tequila. (You probably live in Austin, if you’re reading this; so you’re totally familiar with tequila.) Actually, IZO makes several fine tequilas. And sotol? Now you know. And by now you should also know that Meridian Hive, the locally based makers of those award-winning, thirst-quenching quaffs, have released their Skinny Bee – a lightly carbonated, alcoholic beverage made with pure honey and real fruit, and with only two grams of sugar per can. It’s available in a mixed eight-pack that includes blueberry, cranberry, acai, and grapefruit. It’s available, even, at your local H-E-B – as of March first. Which is today, yes. Dare we suggest you might want to, ah, make a bee-line there ASAP?

What’s that you say about an abundance of flavors? Frankly Vodka? Don’t be silly, reader – we already covered them in this separate blogpost.

St. Patrick’s Day is coming up in a couple of weeks, but the opening date of new Irish-inflected Downtown joint Foxy’s Proper Pub is already past. Still, that only means that Foxy’s is already there waiting at Second & Brazos – waiting for you to stop by and wet your whistle in a more Gaelic sort of fashion with some of their excellent whiskey selections, with Guinness (and so many other soulful suds) on tap, with themed cocktails, with a menu of elevated noms (lamb sliders, Guinness-cured salmon, seafood chowder, and more) and the sort of friendly atmosphere promoted by owners Heather and Steve Potts (who also own Austin’s Cedar Door). Will the beer actually run green on March 17th? We don’t know, and we won’t judge, but we’re certain this Foxy place will be celebrating in a Proper and Pubbish manner.

We’ve said it once before, but it bears repeating: Sláinte!