Restaurants to the Rescue, Even When They Need Rescuing

We applaud Austin's badass service industry and its heroes

So many restaurants stepping up like nobody’s business during the recent winter-freeze power outages and lack-of-water crises. Places that’ve been dealing with their own pandemic-related challenges for almost a year now, pitching in like champions to provide for those in need. 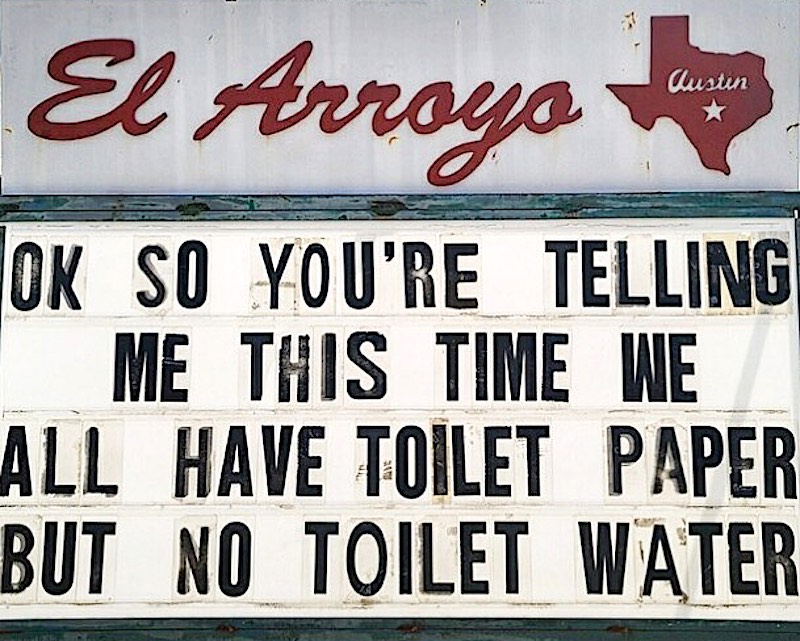 Life's a Ditch, and then you're wry.

Pitching in like champions, sometimes while their own busted pipes and powerless buildings made it nigh on impossible, and regardless of personal struggles and financial woes. This is humanity at its finest – and, holy shit, it's refreshingly nonpartisan.

Nixta Taqueria, Discada Tacos, La Tunita 512, Doughboys ATX, and Trill Foods joined forces to cook and distribute food to the community. Michael Fojtasek of Olamaie, the folks of Good Work Austin – including, of course, those L'oca D'oro titans Fiore Tedesco and Adam Orman – and the WC Kitchen with chef Jose Andres, have served thousands of restaurant meals to the people of Austin. Justine’s Brasserie, Nickel City, and LoLo Wine all provided hot meals to hungry folks waiting in long lines. Revival Coffee hosted onsite food distribution with hundreds of restaurant meals. Antonelli’s Cheese, in conjunction with Deep Eddy’s Austin Relief Efforts, with donations from Facebook and GAHC Austin, provided hundreds of protein packs. And the seemingly indefatigable crew at El Arroyo (yes, that's their famous sign up there) emptied their walk-in coolers to cook everything they had on-hand and then delivered it to the Seton Hospital staff over the winter storm.

Note: Most places have announced reopening to the public – but check their social media for updates and specific offerings.

And our local farmers – working their asses off to try to save what could be saved from the onslaught of Winter Storm Uri, the state’s big sky itself suddenly against them, bringing what they could to Texas Farmers Markets. The first weekend out, many farmers and vendors reported selling out due to high turnout, but their troubles will intensify as many have lost almost all their crops except for greenhouse seedlings.

Note: Free Lunch, the nonprofit group founded by Jazz Mills, has been tirelessly working to provide food for the unhoused. If you’re among those fortunate enough to have shelter, please consider becoming a Lunch Monitor to support ongoing efforts to feed unhoused neighbors. With unprecedented resource depletion, the need will continue –  for housed and unhoused citizens alike. If you’re able to volunteer, check the social channels for mutual aid groups and organizations to determine where your time, resources, and money will be best spent.

We said “stepping up like nobody’s business,” but what about the grocery business? We mean, Sass’s Salad Dressing passing out free food-grade five-gallon buckets for water storage? (How bizarre that people needed such things; but we seriously did, and thank you!) And what about H-E-B? The family-owned corporation is once again proving itself a superhero for Central Texas – from the viral story of letting shoppers with full baskets simply leave the suddenly-without-power store, to mass supply distribution, to doing as much as they can for the people they live among, instead of just, like, flying to Cancun or something … oh, we’re never gonna mock that goofy-ass H-E-Buddy mascot again! At least, not until we get through the consequences of this wintery catastrophe and back to the more familiar, almost oddly comforting, challenges of the pandemic.

Be safe and hang in there, y'all – we're gonna make it through this year, even if it chills us.