Carter Creek Wines are Light, Bright, and Make for a Perfect Night

What will you drink in this new year, citizen, during the s-l-o-w return to situations (social, economic, political) almost resembling something partially akin to what we used to call normal? Will you drink wine? 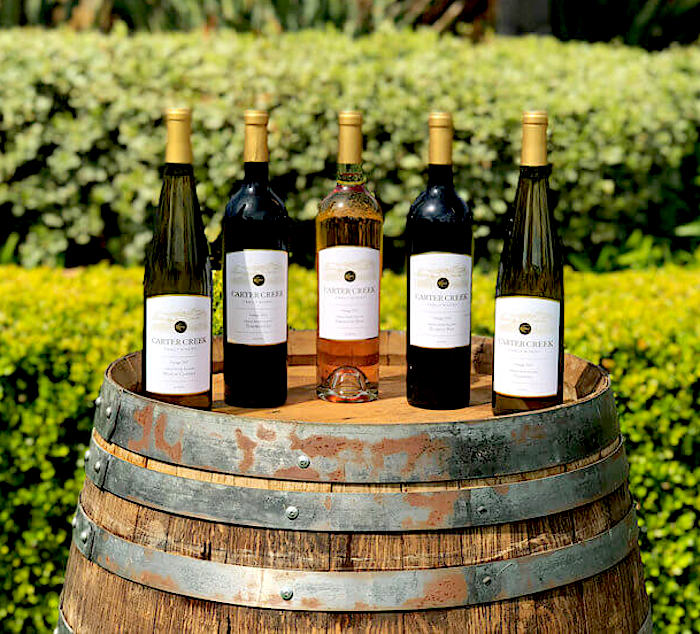 The wines of Carter Creek

We’ll drink Texas wine, especially, made by Texans – even when those Texans are currently based in California.

For example, Jon McPherson of Carter Creek Winery: He was raised in the Texas viticulture – his father is Dr. Clinton “Doc” McPherson, a founder and pioneer of the modern Texas wine industry, who purchased land, planted grapes, and founded Llano Estacado Winery in the late 1970s. While Jon McPherson still resides in Temecula, California – where, during his tenure, the South Coast Winery was a four-time winner of California State Fair’s “Golden State Winery of the Year” – the student of old-world winemaking has returned to his Texas roots to create classic-style wines for Carter Creek.

Since 2016, McPherson’s leaned into European varietals, highlighting crisp whites such as a blend of gewurztraminer, riesling, and muscat canelli for the winery’s Gloriosa – and robust reds such as a Rhone-style blend of syrah, mourvedre, cinsault, counoise, and viognier for the winery’s popular Maverick.

What does this mean for local wine drinkers? It means that there’s some fine new options among the growing array of Texas wines. It means the Hill Country is looking more and more attractive all the time. And, specifically? On a personal level?

Figured we’d see for ourselves, so we got together with some oenophilic friends for a socially-distanced-on-the-back-porch homemade Tex-Mex meal accompanied by some of Carter Creek’s finest. We got together with fellow Austinites John & Rowan Halliday and we ate and drank and chatted about things in general and even some things besides the goddamn pandemic. Like, for instance, the wine.

“Definitely a fruit-heavy nose on this one,” said Rowan of the 2017 Viognier Roussanne. “A little bit of stone fruit.”

“Yeah, it’s not overpowering at all,” said Rowan. “But I’m getting a lot of green apple in the taste.”

“And a bit sweet,” added John.

“It’s actually really good with these enchiladas,” said Rowan. “It’s refreshing, the way it cuts through the spices.”

And so on, like that, as the sun set and the stars began to shimmer beyond the oak branches and the enchiladas disappeared one by one. And by the time we’d finished that bottle of white, and made our way through the (also impressive) Tempranillo, and were sipping the 2017 Grenache Rosé as a sort of liquid dessert, this was Rowan’s conclusion:

“I like this rosé even better than I like the white,” she said. “This is really light on the nose. A bit of strawberry, almost – really light and really faint. Oh, I like this very much! It’s not sickly sweet, like a lot of rosés are. It’s got good flavor, a bit tart. One of the things that stresses me out about Texas rosés is that sometimes you’ll drink it, and it’s this sharp hit of sour, and then there’s … nothing. There’s no middle to it and nothing lingers – it’s a completely ephemeral beverage. This Carter Creek, though, this is entirely non-ephemeral. I guess that’s a weird thing to say, but – I’m glad to add these guys to our list of wineries that we visit. They are on the 290 wine trail, after all.”

We’ll be hitting that trail ourselves, especially later in the year. By which time we’ll have imbibed however many more bottles of wine and maybe – we hope, right? – have been vaccinated against those damned ‘ronas. In any case, we reckon it’s always a good idea to stay hydrated for one’s best health. And the wines of Carter Creek as conjured by Jon McPherson can help with that – at the very least.

MORE IN THE ARCHIVES