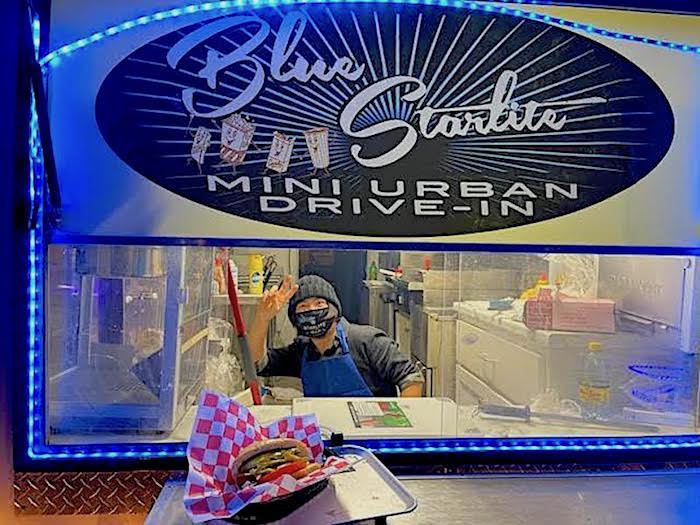 The man responsible for what NBC Nightly News has called “the drive-in of the future” has gone and improved his locations of the present, with the Mueller venue in particular getting, in addition to an upgraded sideshow screen, a brand new chef-curated, menu-driven concession stand.

“We’ve chosen to work even harder to bring our longtime patrons and fans a truly next-level experience at the Blue Starlite as we move into 2021,” says the seemingly indefatigible entrepreneur.

Of course our Screens department (hello, Richard!) will be covering all this frenzied industry in full, but we’re beating him to the punch with the food side of things and telling you that Blue Starlite’s new in-house chef Cyrus Kinzel says: “With drive-ins, there’s a familiarity that you have to reflect in the food. With that came hot dogs and burgers, but I didn’t want to just do that – I wanted to have my own variation and my own spin on it, so there’s kind of an Asian spin on some of the menu items. I wanted it to be familiar, but something out of the ordinary at the same time.”

Familiar, but out of the ordinary? Sounds perfectly in keeping with the whole Blue Starlite concept from the get-go. And we don’t know at press time who to credit – or, more precisely, who to blame – but it’s not surprising that the restaurant of this urban cinema experience, brought to you by the man behind that excellent Giraffes on Horseback Salad book, now boasts a menu item called … the Werner Herzdog.

Ouch, brother, why you got to hurt a person like that?

But, as if to assuage such a krenk, also comes the news that Blue Starlite has “proudly partnered with several Austin institutions, including Amy’s Ice Creams, Eldorado Mexican Cafe, and Texas Coffee Traders to bring other beloved local flavors to the drive-in.”

Yeah, we’d be proud, too: That’s some damned good company, and we’re looking forward to partaking as we safely drive on up to enjoy some of January’s slate of classic and indie films.