Five Snacks Through the Internet

The whole net-connected world’s your oyster, if you have money – and you can even get oysters delivered, too, if that’s what you’ve got a hankering for. But regular snacky snacks are even more available from everywhere, as you likely know …

… and right now we’re pointing out an enjoyable five that’ll help quash your mid-morning or mid-afternoon (or whenever-the-hell) hunger pangs: 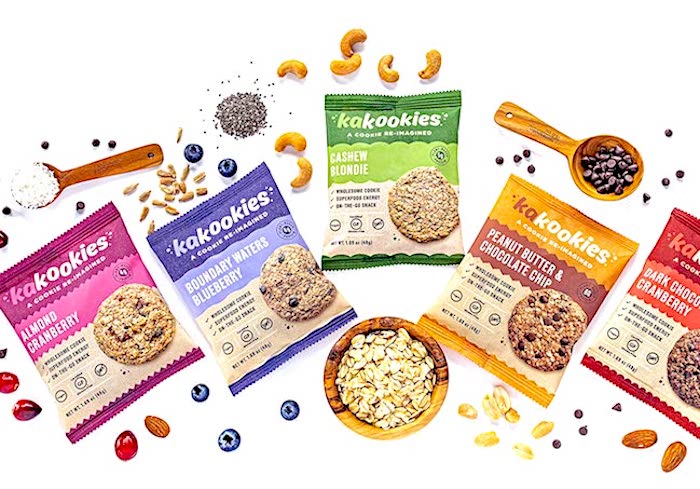 1) KAKOOKIES We receive more so-called energy bars here at the Austin Chronicle’s Food Department than just about anything else, tell you what. Would-be health-promoting companies from all over, hoping to pique our gustatory interest enough so we’ll mention their product in a list like this. But not all energy bars are created equal – though none quite as bad as that one sample, from months ago, that was like someone had glued a bunch of stale birdseed together with honey-infused Elmer’s. The less said about that one, sweet baby Jesus, the better. These Kakookies, on the other hand, are squarely on the more positive side of the spectrum. Although “squarely” should probably be “roundly,” in this case, since the tasty things are a sort of cookie, after all. Gluten-free, soy-free, totally vegan, yes, but also totally cookies. Created by Minnesota-based Sue Kakuk – thus the name – these Kakookies are great for eating between meals for a little extra fuel as well a flavorful treat. “I wanted to pack the deliciousness and comfort of a cookie with the nutrition of an energy bar into a grab-and-go snack ,” says Kakuk – and so she did. With flavors like almond cranberry, blueberry, peanut-butter-and-chocolate-chip, cashew blondie, and more, in a cookie with just enough crunch and just enough chew, these baked delights are highly appropriate for January. Because the first ingredient in Kakookies is oats, see, and can you guess what January is? Yes – it’s National Oatmeal Month! Reckon we’ll be nomming on these things during other months, too, though – especially since Kakuk and company have just launched Dark Chocolate Mint Kakookie Bites, a pouchful of which is just right for your next hike, bike tour, or road trip. Especially if you crave dark chocolate. Or mint. [Confession: We crave both.] 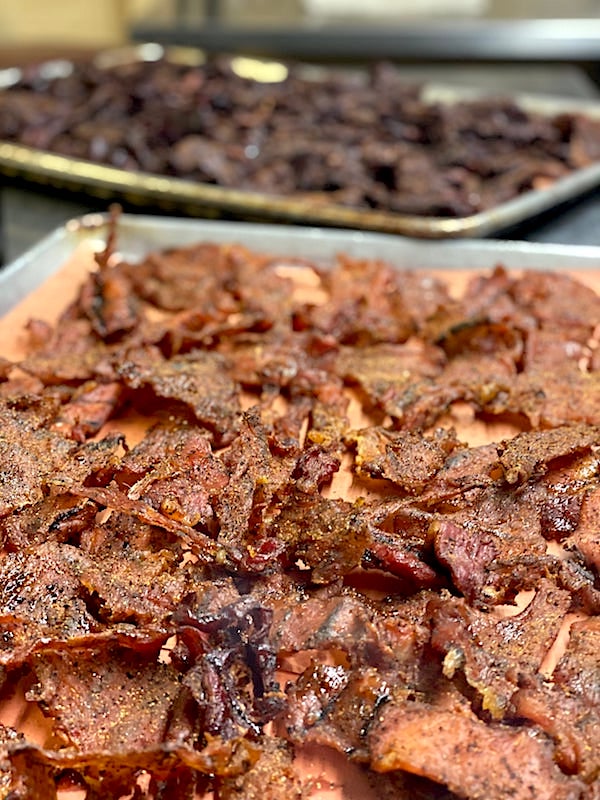 2) BROTHEL SAUCE CO.’S JERKY We’ve eaten some jerky in our day, to be sure. Whether high-end handcrafted jerky from decent barbecue joints to accompany an HBO binge, or mass-produced, cheap-ass, convenience-store-borne strips of dead cow while in the midst of traveling from Texas to Rhode Island, we’ve sure as hell eaten some jerky. We’ll continue eating jerky, too, unless we suddenly go vegan or something, but we may never eat another brand of jerky than what a woman named Abbey Road (her actual name, yes) cooks up for the Brothel Sauce Company out in Coupland. Some jerky’s too sweet, like a sort of meat candy. Abbey’s isn’t. Some jerky is either too tough and ropy, like you’re masticating cured skin (you know: leather) instead of dried flesh, or it’s been somehow reconstituted from previous shredded particles and falls apart like a kind of hideous cream-of-beefwheat while you chew. Abbey’s doesn’t. Abbey Road’s jerky, whether it’s the ribeye beef or the pork loin, is, we’re suggesting here, precisely what your mouth, teeth, taste buds, and belly want when you’re craving jerky. And, like the rest of the snacks listed here, you can get it through the internet. But we did say Coupland – this here’s a solidly Texas product, too. 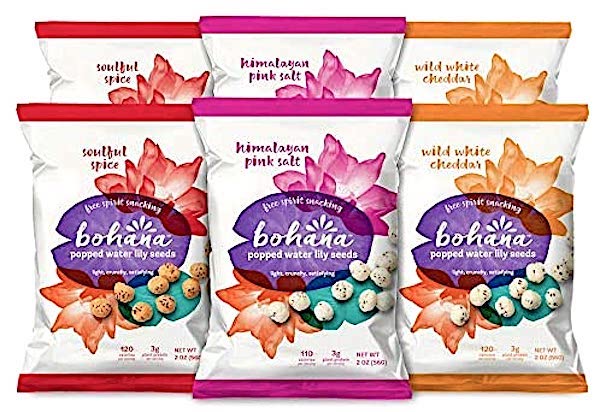 3) BOHANA POPPED WATER LILY SEEDS Say what? Say, popped water lily seeds – a common Ayurvedic food eaten in India for centuries. Bohana co-founders Nadine Habayeb and Priyal Bhartia wowed the start-up judges on ABC’s Shark Tank with this highly snackable concept – which possibly, if only obliquely, explains why we’ve been devouring bag after bag of these popped seeds like we’re a Carcharodon carcharias chomping vacationers on Amity Island in the summer of ’75. (Hmmmm, perhaps not the best simile for use in a snack listicle; but, gosh, the show is called Shark Tank, right?) Also, this vegan-centric, paleo-friendly, totally kosher stuff beats popcorn all hollow, we feel like, mostly because its puffy goodness doesn’t break into bothersome pieces that lodge between one’s teeth – and because the flavors Bohana offers (Sriracha Spice, Himalayan Pink Salt, White Cheddar) match the kind of savory taste profiles we prefer. [Note: They do have a couple of sweet options, too, if that’s your sort of thing.] 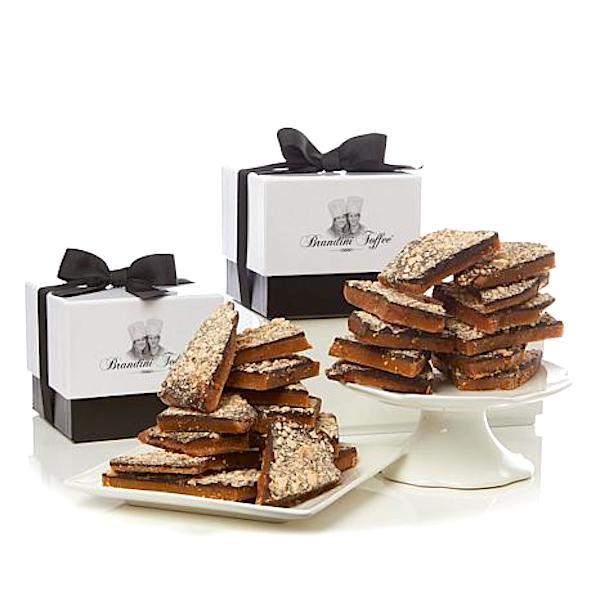 4) BRANDINI TOFFEE Just because we prefer our popped water lily seeds all savory (now that we know such things as popped water lily seeds exist) doesn’t mean we don’t have a sweet tooth. We have so much of a sweet tooth, in fact, that we’re mentioning these handcrafted delights again – like we did in our Perfect Date Night round-up back in September. Because of the delicate crunch and rich buttery taste of what the Brandini family is doing with toffee and chocolate out there in Palm Springs, the posh succulence has been on our tongue’s mind ever since. And, in case you’re amenable to such confectionary pleasure yourself, dear reader, well, we wanted to remind you. 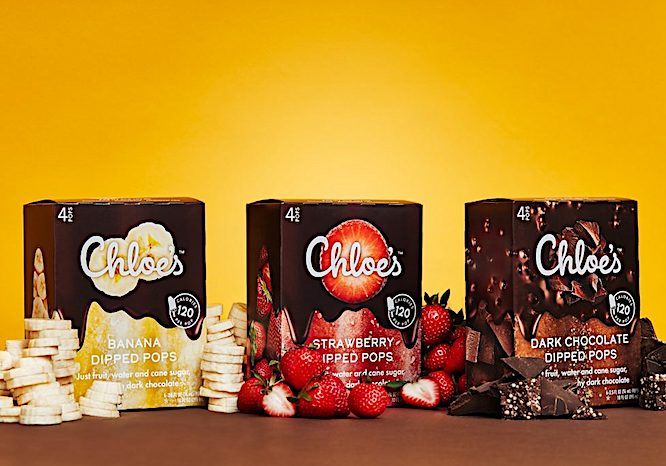 5) CHLOE’S DIPPED POPS And how about something for later this year? How about something for when our nearest star is once again turning the vast Texas landscape into a kind of Southwestern hell and you need something to help you cool off? These frozen pops won’t complicate your diet with an influx of industrial chemicals – they’re just fruit, water, and cane sugar dipped in dark chocolate. Not that Chloe’s regular fruit pops aren’t wonderful. Not that the company’s line of oatmilk pops aren’t also a pure chilly delight. But you know how we feel about dark chocolate, citizen, so we’re specifically championing the ones – banana, coconut, and strawberry – that are dipped in the stuff. And we’re also noting, finally, here (because it makes our mind boggle as much as it makes our taste buds rejoice) that there’s even a dark chocolate pop that’s been dipped in dark chocolate. O Chloe Epstein, culinary entrepreneur up there in the Empire State, we salute you!