Ask any vegan in Austin where to get the best pizza in town and the number one answer you’re likely to receive is “Li’l Nonna’s.” Ask those same vegans where to grab the best ice cream to accompany that pizza and the answer you’ll hear most often is “Sweet Ritual.” 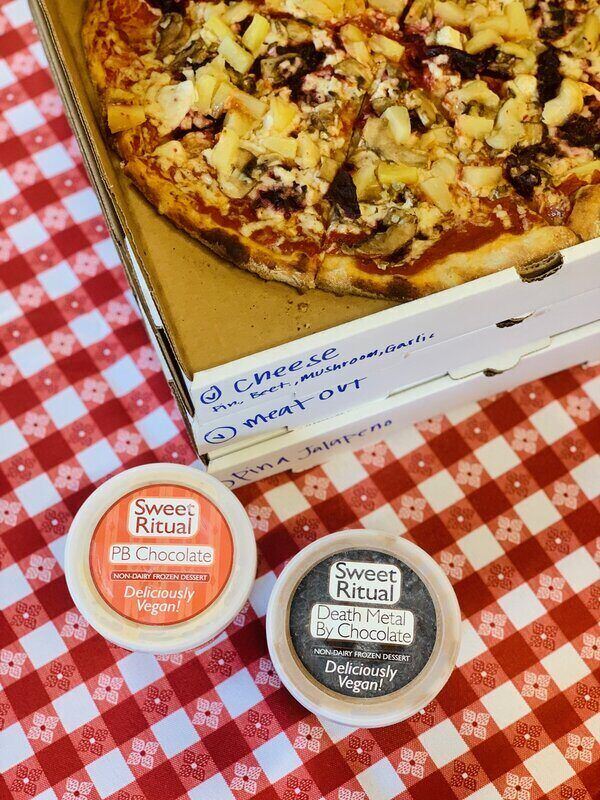 But with Li’l Nonna’s all-vegan pizza trailer located in South Austin’s The Yard and Sweet Ritual’s colorful scoop shop on Airport Blvd, just west of I-35, the two haven’t traditionally accompanied one another as often as local foodies, vegan or otherwise, may like. But this fall, the two businesses came together to create one winning combination and the local vegan community couldn’t be more excited about it.

In November, Robbie Lordi, owner of Li’l Nonna’s, and Sweet Ritual’s Amelia Raley joined forces to open Big Nonna’s in North Austin: a pizzeria and ice cream shop in one. And all in a proper brick and mortar storefront, a place where diners can pick up their favorite pie (beetaroni, anyone?) and indulge in a few scoops of Death Metal by Chocolate.

It’s especially exciting news for North Austinites, who have long suffered from a dismal lack of vegan options in northern neighborhoods, many of whom would still suffer the long, slow, and stress-inducing trek down the interstate at dinnertime in order to indulge in their favorite meal or dessert, according to Lordi and Raley.

“We see so many people coming to Sweet Ritual and Li'l Nonna’s from Pfluggerville, Round Rock, even Cedar Park,” Raley says.

So now that they have easy access to some of Austin’s most popular meat- and dairy-free eats, “People are super psyched,” adds Lordi. The new restaurant was a long time coming. According to Lordi, he and Raley have been talking about starting a business together for at least two years after getting to know each other at the ATX Vegan Business Owners meetings that Raley organizes.

“It's always seemed like such a natural fit,” Lordi agrees. So they started looking at properties and, despite the pandemic (or perhaps because of it), located the perfect spot this summer – a restaurant space in North Austin that was home to a pizzeria, Brooklyn Pie Co., that closed this summer. Essentially, that meant Raley and Lordi, (together with their two other partners, one of whom is Li’l Nonna’s general manager Sean Connolly) scored a space that was not only already set up as a pizzeria, but all of the equipment was included in the lease.

“We basically got a once in a lifetime deal,” Raley says.

The restaurant opened in November for curbside pickup only, but has been slinging pies left and right with sales at least as good as Li’l Nonna’s. Alongside all of the customer favorites from the trailer (including gluten-free crusts), pints of Sweet Ritual ice cream are also on the menu and soft serve will be available soon. What’s more, Lordi and Raley have big plans to expand the menu to include subs, pasta dishes, take-and-bake meals, fun ice cream toppings, and more in the near future.

For now, customers can order their pizza and pints to-go and take it home to veg on the couch or pick a socially-distanced spot on next door neighbor Little Woodrow’s patio where dogs are welcome and alcoholic beverages flow freely.

As for the space itself, Raley and Lordi see a room full of tabletop games, a comfortable dine-in area, even pinball machines lining the walls; a welcoming space for lovers of pizza and ice cream, vegan or not.

“I hope one day very soon we will all be together again celebrating,” Raley says.

Ready to order? Find the menu at www.BigNonnas.com.