Here’s your weekly Food News Buffet for the third week of October, culled from numerous PR releases, official posts, words on the digital street, and even the occasional (verified) IRL eavesdroppings. 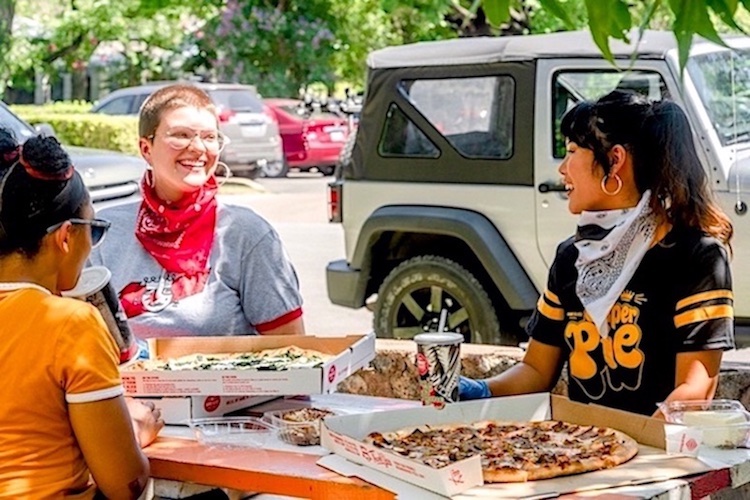 Vote, citizen, and then get some free pizza at Home Slice (Photo by Jane Kim)

You’ve heard that JuiceLand is closing all its stores early on Tuesday, Nov. 3 – at 1:30pm – so that their employees can go and vote, right? And you already know that Home Slice Pizza employees get three hours’ of pay for voting? But, if you’re not working for either of those estimable companies, you’ll be more stoked to know this: From now through Nov. 3, both locations of Home Slice will offer a free slice of pizza to any guest who shows up to its slice windows wearing an "I voted" sticker. Bonus: Home Slice’s patios have re-opened, too, so you can wear your best locally made mask and set for a spell.

Give your forever-cooking abuela a break, friend! Local nonprofit Manos de Cristo has begun its annual Tamale Sale fundraiser, whereby you can choose from five varieties of naturally gluten-free tamales for just $15 a dozen (and, by doing so, help provide folks with access to emergency food and clothing, low-cost dental care, adult education classes, and school supplies).

Lick Honest Ice Cream is celebrating nine years of business by giving you a gift: It’s buy-one-get-one-free on small, medium, and large ice creams at all their scoop shops on Wednesday, Oct. 21. Yeah – and then, once you’re hooked? The sweetness-savvy fiends roll out their new seasonal flavors on the 23rd: Gooey Pear Butter Cake, Toffee Caramel Swirl, and the totally vegan No-Egg Nog. [Note to self: Gooey. Pear. Butter. Cake.]

Tarrytown is getting its own taco park, as the acclaimed Veracruz All Natural food truck follows coffeemongers Medici Roasting into the brand new Littlefield’s Coffee + Tacos spread at 2401 Winsted Lane; the Medici caffeine machine is open already, ahhhhhhh, and both rolling venues will be in full daily operation by October 22.

As of this week, the Happy Foods kitchen and pantry at Swoop House is open seven days a week, as is their delightfully verdant “garden of eating” … Texas French Bread also has a garden, and the restaurant’s re-opened for dinner service Thursday through Saturday, and set to expand, and – chef Murph Willcott says they’ve got their hands on some superb wines for your quaffing … There’s so much going on at the Far Out’s welcoming and beery lounge and environs that we can’t even rn, but no friend of canines will want to miss Saturday’s "Barktoberfest" with its pro puppy photographer and the Dog Treat Truck on-site and (of course) traditional Oktoberfest beers and noms and live music … Speaking of beer, that excellent Apis restaurant (out where the Texas Hill Country gets started, right?) has teamed up with Austin’s own Independence Brewing, for a series of honey-inflected beers (and upcoming events) that you’ll be wanting to try, even if you’re not 1) Eric Puga and 2) taking a shower … and, up in Hutto, there’s even more reason for Austinites to care about Hutto now: Elgin’s own Southside Market (aka The Oldest BBQ Joint In Texas) is opening their much-anticipated second location there – in the new 35-acre Co-Op District on Thursday, October 15.

And, oh, Juliet Italian Kitchen (hello, Barton Springs Road!) will also be opening a second location – but in the Arboretum, and not ’til early 2021 … Meanwhile, Bouldin Creek Cafe isn’t opening a second location – who told you they were, anyway? – but that vegan-forward diner on South First continues to serve up its delicious and nourishing menu of take-out classics and specials … and, say, this is just a tangent, but have you had a chance to check out Central Machine Works new Beer Pub Breakfast yet? Because (a pastrami, egg, & cheese sandwich? a breakfast pizza?) yum …

And, looking ahead, do you think Pluckers is … trivial? Well, a lot of people really love those wings, and they (the eatery’s staff, not the wings) will be hosting a Halloween-themed virtual trivia contest (livestreamed via Facebook) on Wednesday, Oct. 28, at 7:30pm.

Also: It’s not Thanksgiving yet – duh, because Halloween still hasn’t come and gone – but it’s probably a good idea to order your Turkeyday pies ahead of time (suggestion: approximately now) from the likes of Icepick’s Pies or 2 Dine 4 or maybe one of those fantastic homebased Bakers Against Racism we featured a while ago.

Best of noms to you, citizen, and watch out for those ‘ronas!