The Perfect Date Night Is In the Details

Sometimes, for Date Night – which was a thing for longtime couples in the Before Times and is even more of a thing in our current situation – sometimes you don’t want to get food from a fancy restaurant, no matter how tasty the available options are. 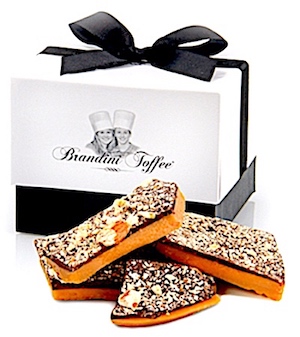 Sweet, buttery goodness in every crunch

Sometimes, you want to make like a culinary hero and cook the meal yourself, thus newly impressing that significant other you’ve been shacked up with for however many years.

(At least you want that, sometimes, if you’re me: Your current reporter, Brenner, the Chronicle’s food lieutenant and arts reviewer – and longtime Austinite who’s fortunate enough to’ve been married to a certain witchy cyborg named Katherine for, ah, going on 11 years now.)

So the first thing you’re going to do, for Date Night, is finish that piece of Brandini Toffee you’ve been nibbling on. Finish savoring its delicate crunch and rich buttery taste. Finish licking its dark sweet chocolate off your lips. Finish – look, there’s more Brandini in the fridge for later, okay? So back away from the toffee for a moment, you fiend, and get to fixing that dinner.

First, you’re going to get yourself a couple of pork chops. Yes, pork chops – because you and your beloved are omnivores who eat chicken and beef way too frequently, no matter how many veggies you also eat. And, no offense to Wilbur and Charlotte, but sometimes a pig is more Delicious than Radiant. 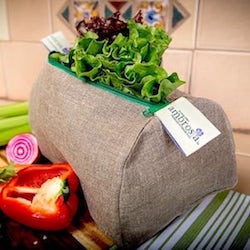 Bag your produce up right

So you get those chops from the H-E-B, because that Texas-born chain is pretty much the best grocery store in the whole wide world and is run by a corporate team who should be running the entire USA, actually, because H-E-B is an exemplary, people-forward corporate citizen and would do a much better job than the [disgusting expletive deleted] supposedly in charge of this country at the moment.

You get those pork chops and you get some green onions and you get a couple of apples. And, first thing you get home, you place the apples in that gorgeous ceramic bowl you got from the pottery artisan Nic Wibbelsman and you stash the green onions in the produce-keeping flax linen bag from Ambrosia. 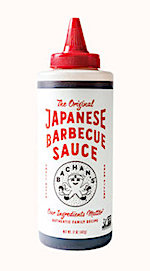 Go ahead, slather it on

Any bowl will do for the apples, of course, but that Wibbelsman piece is just so lovely to look at, especially the way its deep blue glaze complements the Granny Smiths’ bright green. And you know your green onions would be fine even if they were stashed in the fridge for days, as that natural Ambrosia bag allows just the amount of air and moisture that those onions (or celery or spinach or kohlrabi or whatever) need to remain fresh, but you’ll be getting to those onions soon enough anyway.

You set the pork to marinating in a casserole dish, dousing the meaty chops with Bachan’s Japanese Barbecue Sauce, because it’s excellent for marinating (or slathering atop anything you’re grilling) and you’ve had an epiphany: You’ve realized (after using the soy-based sauce a few times now) that Bachan’s is probably what the angels use when they’re making teriyaki in heaven. So those chops are gonna turn out just right.

No sooner have you doused the pork than you get a call from your sister who’s a trauma nurse up in North Carolina, and she spends a while telling you the family gossip and relating her struggles from the healthcare-provider perspective during a pandemic, and you realize again that the most harrowing deadlines of journalism are child’s play compared to what some other people have to deal with. 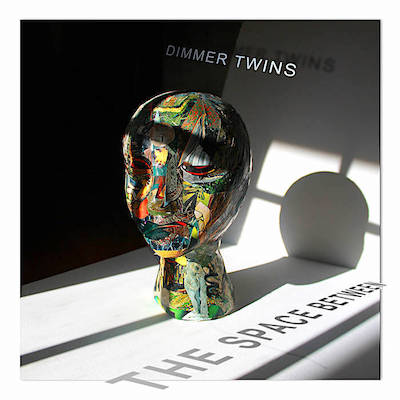 And now it’s time to deal with the produce, and you’re gonna want some music to groove you through the peeling and the chopping (and to cleanse your mind’s palate after that earful from your sibling), so you fire up Bandcamp on your iPad and allow The Space Between, that funktastic album from the Dimmer Twins, to complicate the airwaves while you work – and damned if the sonic collab between Ricardo Acevedo and Christopher Petkus doesn’t cause your hypothalamus to squirt dopamine all throughout your brain’s electric pudding and, ooooooh, veggie prep can be a real breeze, sometimes, can’t it?

(Of course, it’s not just the music. The sharpness and balance of the kitchen knives from Austin’s own Made In is partly to blame for the ease with which you attend to those apples and onions.)

Then you take those marinating chops and pour off most of the sauce, and you layer the diced apple pieces and the chopped onion bits on top of the glistening pork, and then cover the dish in tinfoil – in much the way a QAnon stan might cover their noggin to keep the Illuminati’s psi-cooties away, perhaps, but here the wrapping’s done to focus heat and retain moisture and in any case Bill Gates is not the enemy. 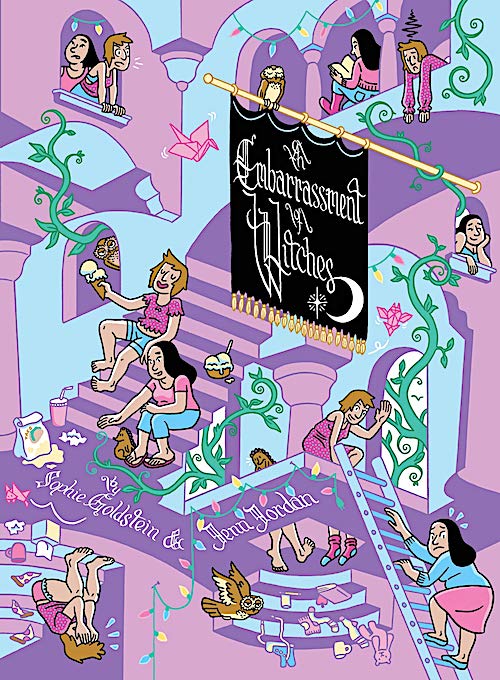 Next, you’re baking those chops for an hour at 385 degrees – and in the meantime you’re gonna read this graphic novel you got last week: An Embarrassment of Witches by Sophie Goldstein and Jenn Jordan, which, it turns out, is a wonderful story about the emotional treacheries and treasures of relationships – romantic and familial, academic and magical – and it’s also funny as hell and makes you sad that Preston Sturges is long dead because he would’ve been the perfect choice to direct it as a movie (even though he wouldn’t have made it look as good as Goldstein’s enchanting and allusion-rich art does). And you recall the artist’s earlier House of Women from Fantagraphics and are glad that Top Shelf Comics has done such a good job on the production of this newest book, and but now you’re gonna have to Google and see what else Jenn Jordan has written, too, because – ah, shit, the pork chops are ready, never mind the internet.

So you swallow the last few drops of your Tanqueray gin & soda, that refreshing Sevilla Orange flavor that’s among the brand’s new line of canned cocktails, and you set the can next to the can of Tanqueray Rangpur Lime that you had yesterday, because both those tallboy canisters are so beautifully designed that you can’t bear to toss them into the recycling bin just yet. You know? 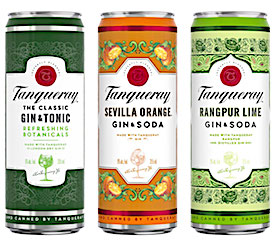 As tasty as they are pretty

And then you zap a package of H-E-B ready-to-go mashed potatoes in the microwave – hey, you don’t have to do everything from scratch, hon – and then set up your best plates with the tender, juicy chops and their apple-and-onion toppings and those steaming taters, and you shout up the stairs to your sweetheart that Date Night Hereby Commenceth.

And of course your darling is impressed and delighted and, wow, what an excellent meal – with some of that new blueberry Skinny Bee mead from Meridian Hive to wash it all down with, even. Ah, what a way to live the good homecooked culinary life …

But what’s a Date Night if it’s not dinner-and-a-movie, right?

But you don’t wanna take a chance on seeing something less than terrific, not tonight. And who can trust reviews?

Hell, even Marc Savlov can occasionally be wrong in a chacon-a-son-goût sort of way. 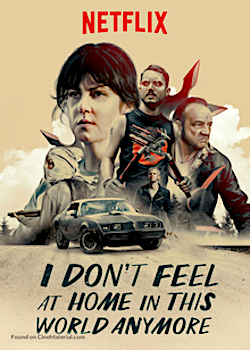 This movie, holy shit, it hits like a shuriken of pure cinematic pleasure

So, after you’ve nommed yourself just short of a pork-chop-and-potatoes stupor, you check online and find that, yes, it’s available on Netflix: One of the most enjoyable films to come out of Texas since Texas became a state. The oddball thriller that’s perfect for Date Night: Macon Blair’s I Don’t Feel At Home In This World Anymore, starring Melanie Lynskey and Elijah Wood.

Oh man, it doesn’t get much better than this! It really –

Except, what’s a movie without popcorn?

Even at home: WHAT’S A MOVIE WITHOUT POPCORN?

Sad, is what it is.
Sad, sad, sad. Just really fucking sad.
Especially when it’s a Date Night movie.

But, look: Brandini Toffee? That stuff you were munching on before this whole escapade began? That buttery confection that was served by request at the White House when Barack Obama was, hallelujah, still president? They also do popcorn. They do a toffee-enhanced popcorn. They do popcorn pretty much like Rolls Royce does cars, only much more edible.

And so there’s your perfect Date Night, citizen, mmmmmm yes …

Date Night, Date Night, so many things to get it right, Who could refuse a bright product-placement-apalooooza, right?