Slush Fun for everyone (over 21)

Two powerhouse, Austin Chronicle power-ranked local breweries each known for their crisp execution of flawless lagers and precise hazies are coming together to collaborate on ... a hard seltzer? Time to get in on that skyrocketing flavored water game, folks! 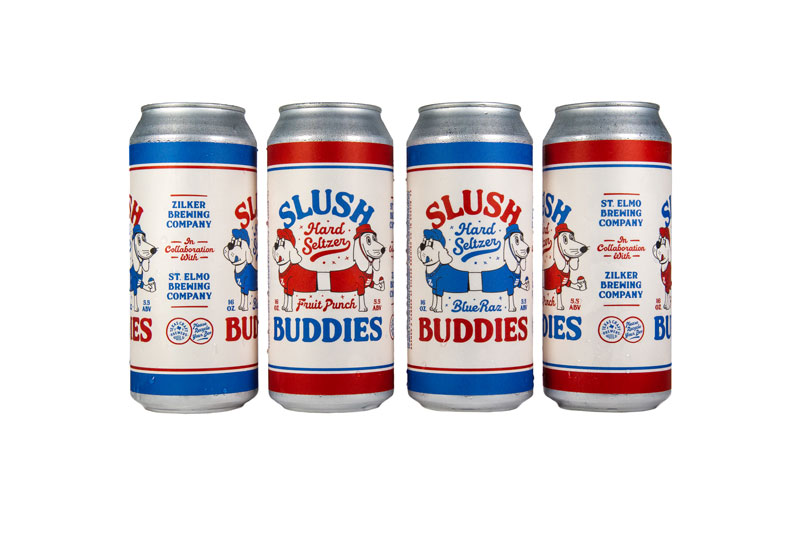 But, as Austin breweries are inclined to do, this isn’t some sort of half-measured effort by two of the most confident brewhouses in the state. South Austin’s St. Elmo and the Eastside’s Zilker are mirroring our nostalgia for simpler times like the mid-90s, where the only crippling debt was the time invested into Tekken 2 and the only American jerk you had to worry about was Latrell Sprewell choking you out or hitting you with his Mercedes. Even Bill & Ted are back to pull us into that blurry 90s Zion. Whoa!

With Slush Buddies, St. Elmo and Zilker are harkening back to those wistful gas station goodies in flavors Red (fruit punch, ABV 5.5%; exclusively at St. Elmo) and Blue (as in raspberry, also 5.5%; Zilker's version). The two locals have plenty of water-bending experience, given they were the first two breweries to produce their own hard seltzers and release them independently.

Via email, St. Elmo co-founder and head brewer Bryan Winslow explained that both of the brewery taprooms have each employed a frozen beverage machine and Slush Buddies will also come in a “Big Boy” upgraded frozen version of the canned beverage coming atcha with a Ganryu Sumo Hammer 8.5% ABV wallop. (Tekken fans will know.) According to Winslow, those frozen baddies will be available on-site in each brewery’s taproom with a “very limited supply of color-changing cups” (we see you Generra Hypercolor stans!) but also available to-go in something called “frozen beverage bags.” Think of it as a frozen CapriSun that will work that kink out of your neck from staring at a goddamned screen all day. We take it back. This modern era rules.