If you’ve picked up Nixta Taqueria takeout this week, you may have noticed a brightly colored installation chilling (literally) outside the door. This lone fridge is the first in a long line, stewarded by ATX Free Fridge, to provide food insecure neighborhoods fresh produce and more for free. 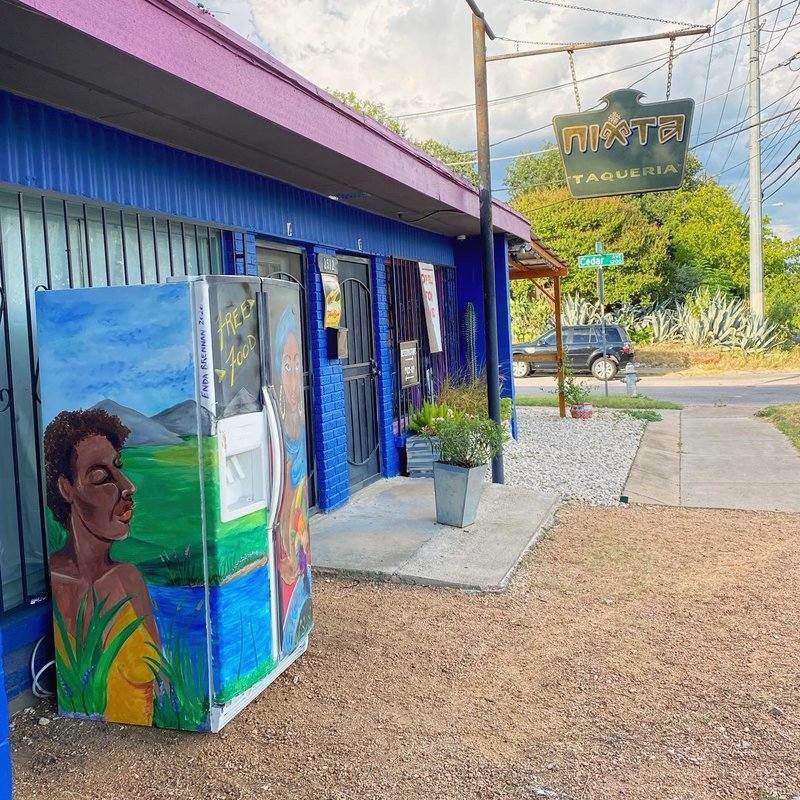 “So far it's mostly just been individuals [donating food]. Which is really cool because ultimately a big part of the intent is that it feels like it's community-owned, as opposed to some organization just made it and put it up.” The concept is rooted in mutual aid, says Kyandra Noble, who is “reluctant to say, but I guess I started it.” She had heard through Instagram about In Our Hearts NYC, an organization which had opened community fridges around Brooklyn, and thought she should do the same in Austin.

Setting up the first fridge at Nixta Taqueria (2512 E. 12th St.) is partly a coincidence: Owners Sara Mardanbigi and Edgar Rico responded to an Instagram open call for hosts that Noble put out, and they had already been doing similar community-focused food service in their neighborhood during the pandemic with the help of Sustainable Food Center – but it's also in a location of community need. Noble has all but confirmed two more host locations in East Austin – at an apothecary and an art studio. She has plans to expand to Riverside, the north Springdale area, North Lamar, Windsor Park, Walnut Creek, and Dove Springs, but says it doesn’t matter where they are as long as there’s a need in the neighborhood.

“We want people to feel comfortable taking as much or as little as they need and leaving as much or as little as they can. We're not here to – I don't wanna say the word ‘police’ – to judge or monitor what's happening, we just wanna get the items to people who need them. And if there's a situation where someone comes and takes a bunch of stuff, then they needed it. The fridge will continue to be stocked, so that's something that they can depend on no matter what.” 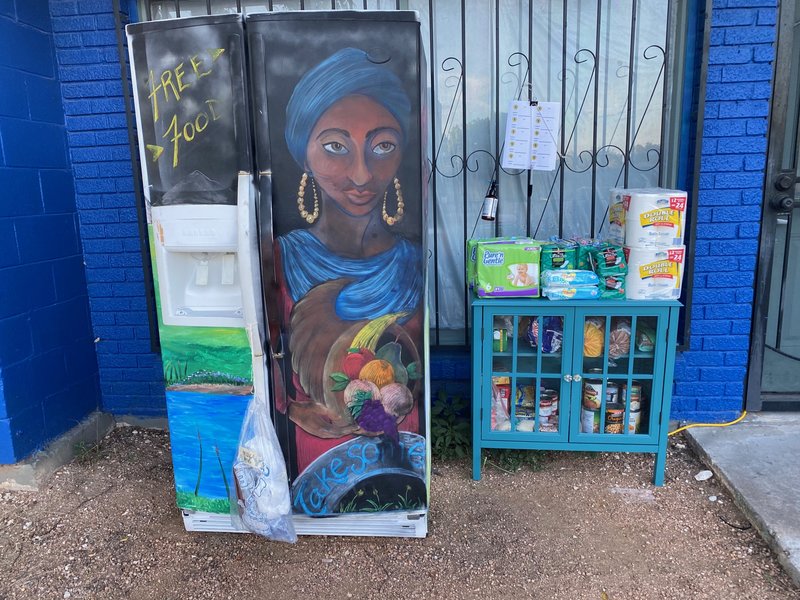 Non-perishable items are also accepted at the Free Fridge station, but fresh foods are preferred. (Courtesy of Kyandra Noble)

ATX Free Fridge allows donations of every kind except raw meat, but encourages fresh produce especially: “A lot of the neighborhoods where we have put up or plan to put up a fridge tend to be more food insecure, so people often lack access to healthier, more nutrient dense foods,” explains Noble. They encourage labeling prepared meals to indicate ingredients in case of dietary restrictions or allergies and to ensure food doesn’t spoil, and ask people to put the newest items towards the back so there is a natural flow of “first-in-first-out.” Volunteers come multiple times a day to sanitize and check on the fridges, but their FAQ says, “If you can take recyclables/compostables home to properly dispose of them, you’d be our hero.”

The project is a testament to communities coming together in hard times, made special by the creativity of the Austin community, Noble says. She reached out to a painter friend (Enda M. Brennan) who made the mural that adorns the first fridge, and another local designer contributed a sweet lemon-faced logo (Lindsay Gallagher.) Noble says the bar has been set high for the aesthetic of the project, but that many other local artists have already contacted her to spruce up the next fridges.

Noble says this isn’t just an emergency measure for COVID times: “I would love for this to be long term. I don't see why this is something that would stop until there's no longer a need for it, and I don't know when that is going to be. The goal for me personally as the ‘founder’ of this is that we are able to have them all over the city... all sort of self-sustained by their own communities. Because I think a community that lives near the fridge can determine what is needed...maybe one fridge needs more milk or baby formula, and one tends to go for more dry goods. We want that to ultimately be in the hands of the people who live there. We want there to be more of a sense of ownership.”