The new farm plans include Texas sunflowers and hungry pigs

Tina and Orion Weldon, the dynamic duo behind the first industrial-scale regenerative agriculture model, TerraPurezza, have had a whirlwind couple of months. In addition to a new baby, they now have Willie Nelson’s blessing to build a regenerative farm on Luck Ranch, his 500-acre plot in Luck, TX. 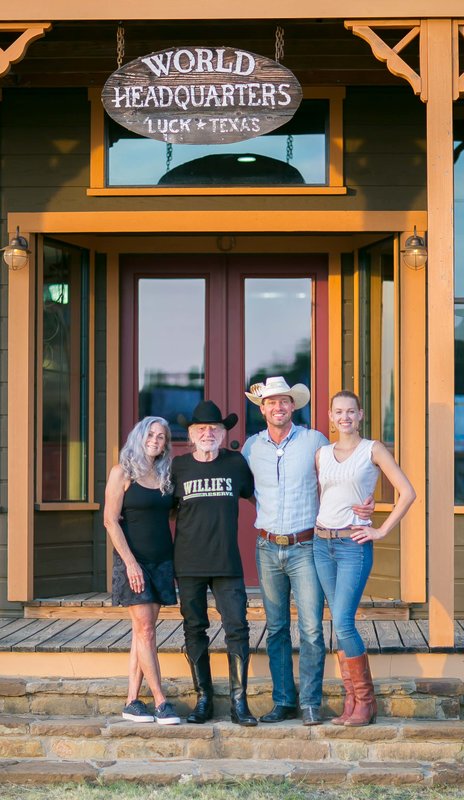 “They approached us; it was totally out of the blue,” Orion explains. “Willie's wife Annie had apparently been secretly attending our farmers market, the Pedernales Farmers Market, and one day she kind of waited for all the other customers to clear out and approached our farmer stand individually.”

Initially under the guise of a question about their post-COVID delivery service, Annie Nelson struck up a conversation with Orion and invited him, Tina, and their newborn son over to Luck Ranch. Built in 1985 as the backdrop for the film Red Headed Stranger, Luck is an old west town located in Nelson’s backyard outside of Austin and serves as the venue for the annual Luck Reunion music festival. Nelson, a co-founder of Farm Aid, is a longtime environmentalist and champion of family farms.

“After we had relaxed and built up some rapport, she basically said she had been watching us for about four years. She said, ‘We wanted to make sure you did what you said you [would], and you did… and we would like for you to build a regenerative agriculture farm here on Luck Ranch.’” At first, the Weldons thought it would be a consultation of some kind, but the Nelsons clarified: “‘We think it should be TerraPurezza on Luck Ranch and Willie Nelson can be your spokesperson.’”

“Yeah, we were floored,” Tina laughs. The Weldons, academics before farmers, have planned for a regenerative agriculture educational institute for some time, to teach practical methodology and conduct a study for peer review that will prove industrial-scale regenerative farming is a realistic model. (Check out our April 2020 feature on their work.) Luck Ranch – which will also be a distributor of TerraPurezza products including pork, poultry, and eggs – provides the perfect place for that integrated goal to become a reality. “They [the Nelsons] are thinking about this in terms of a legacy approach,” Orion explains. “Annie is very aware of how this ranch will continue after they are gone. They want to see the institute, they wanna see classrooms, they wanna see workshop buildings, office buildings, they want a market there. This is the initiation of a long-term dream.”

“They [the Nelsons] are thinking about this in terms of a legacy approach. This is the initiation of a long-term dream.” – Orion Weldon, TerraPurezza co-founder

But the dream will take some work. The land is almost entirely degraded, “through no fault of the Nelsons,” assures Orion. “Almost the entirety of the Texas Hill Country is subject to these starting conditions because so many goats and sheep and cattle were run over the land for years. And the topsoil has just been washed away… It's just a classically overgrazed, caliche-dominant, bushy, brushy environment at this point. So we anticipate probably two growing seasons before we start to see the impacts of our work.” But the degraded conditions will actually help their study hold up to rigorous peer review; it will be “more of a classical study of before-after-control-impact [BACI] design.”

In all of their campuses, the methodology is the same. A true educator, Orion explains the logic behind the regenerative model: “Grasslands were created and maintained by these roaming herds of bison, elk, pronghorn, and white tailed deer. That was a mutually beneficial relationship between the perennial bunch grasses that needed these grazers to eat them and make the nutrients [in the soil] bioavailable through their manure. Now that's all stopped.” 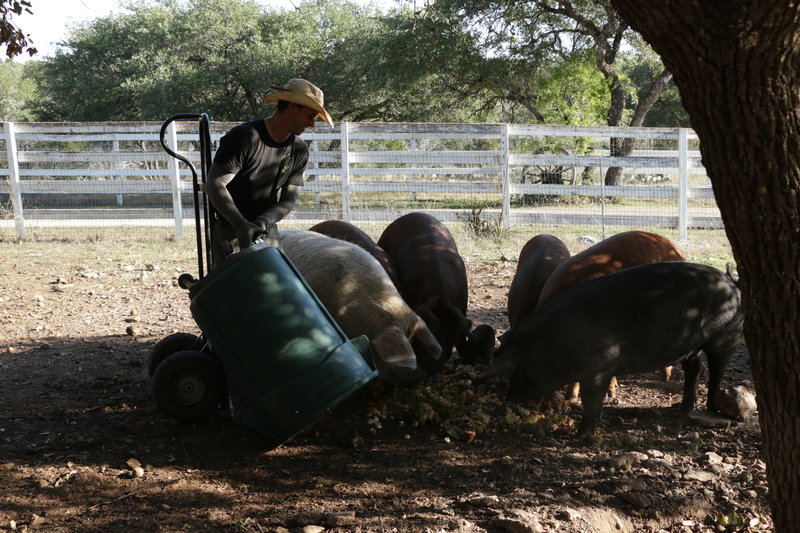 The solution can’t be to stick sheep and cows on barren land, because they would have nothing to eat and would need expensive hay. “This is supposed to be an example model of how to have a successful regenerative agriculture business. If it's taking huge amounts of capital to get it off the ground, that's not gonna be available to a lot of people.” So instead, they run pigs over the land – “this incredible source of a nutrient dump” – that are fed with food waste from Whole Foods. “So we can basically do what would have traditionally been agricultural amendments to the land, except we're doing it through manure instead of expensive fertilizer.” After the pigs, they apply nurse plants and native seed mixes, and in roughly two growing seasons there are enough native grasses to start running sheep and cattle.

TerraPurezza’s other studies prove the validity of their methods. Shield Ranch and their two other campuses in Spicewood are all regenerating native Texas habitats after years of cultivation. “The number, diversity and abundance of native perennial bunch grasses and wildflowers vs. non-native species is really encouraging,” says Orion. “And for some reason especially the Texas Sunflowers go crazy after the pigs have cycled through.”

Willie, for his part, says his family “wants to be a part of showing that regenerative agriculture is possible for both small family farmers and big corporate farmers.” To that end, the partnership will begin implementing regenerative practices this summer and we can expect to see fields of sunflowers at Luck Ranch by fall 2021.

To follow the process, and to learn more about TerraPurezza, visit www.terrapurezza.com. To become a Patron, visit www.patreon.com/join/terrapurezza.