At least once a week, now, friend: Culled from numerous PR releases, official announcements, words on the digital street, and even the occasional (verified) IRL eavesdroppings, it's your food! News! Buffet! 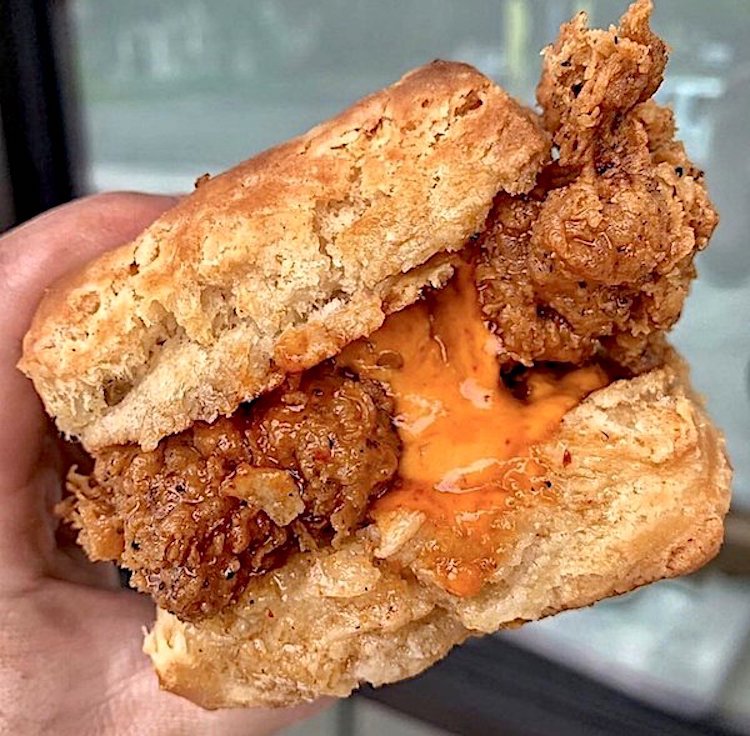 Bird Bird Biscuit's got some of what you want

Well, holy Texas hash ’n’ eggs – the popular East Austin breakfast and lunch spot Paperboy has gone from beloved trailer to full-on bricks and mortar on East 11th. The new venue debuts with dine-in seating on the patio and rooftop only (there’s a virus in town, don’tcha know), along with a walk-up window for those convenient to-go orders. “This has been a dream of ours for a long time, and we’re grateful to be opening our doors,” owner Ryan Harms tells us. “We’ve been working around the clock to be able to open safely while still delivering an experience that’s true to who we are at Paperboy.” (Who they are is the crew that impressed the hell out of our former food editor Brandon Watson – and you remember how finicky he was, right?) The new place, designed by architect Chioco Design and interior designer Laura Harms, freshly enhanced with cocktails and a full coffee program, is open from 8am to 3pm each day and is now taking online reservations.

Conan’s Pizza winning our recent Pie Fighters throwdown might’ve been a surprise to some, but not to the countless Austinites who chimed in with congratulations and happy reminiscences on all the media that’s social. It might be more of a general surprise that Aviator Pizza, started in Elgin by John McElroy back in 2013, recently opened its fourth location – at 4005 W. Parmer – and it boasts an outdoor beer garden that’s got 50 taps with rotating beers and ciders. And, unlike the other locations, Aviator North sells ’za by the slice as well as the whole pie. Note: In addition to the 17 specialty pizzas, the menu also includes focaccia breadsticks, charcuterie boards, sandwiches, salads, calzones, desserts, and a build-your-own-pizza option.

We understand that, even with the bars closed, and with people kind of wanting to imbibe maybe just a little more these days, beer and liquor companies are doing pretty well when it comes to hawking their robust wares. But it seems like there’s a growing demand, too, not just for any old alcohol but for the best of the brewing and distilling arts. Which is why we’re telling you now about a thing that won’t be released for another month: HoneyDew, a honey-infused, 80-proof bourbon from those admirable Garrison Brothers out in Hye. The golden tipple is made with Texas wildflower honey from Burleson’s, and it’ll be available nationwide on August 1 … Meanwhile, that Treaty Oak Distilling powerhouse of potent potables has debuted a new ready-to-drink product: the Treaty Oak Old-Fashioned, made with bitters, simple syrup, orange zest, and the distillery’s own Ghost Hill Bourbon. (You know their bourbon’s made from local heirloom grains from Barton Springs Mill and is mashed, fermented, distilled, barreled, aged two years, and bottled on-site, right?) The 375ml bottles are already available at the distillery in Dripping Springs, and “they’ll be rolled out in select retailers throughout Texas in the coming weeks.” … And here’s a shout-out to the boozy darlings at Still Austin Whiskey Co., whose award-winning spirits are always Texas-sourced and mighty fine, who donated a batch of their new anti-virus sanitizer for distribution via the Red Beans and Ricely Yours project we told you about last week. Slainté!

It ain’t all biscuits as usual, now that Olamaie has unveiled Little Ola’s Biscuits, a take-away shop (operating out of the acclaimed restaurant) that features their flaky doughgasms delivered right to your car. Those biscuits are available plain or as sandwiches (e.g., chicken thigh slathered in Texas honey; sausage, egg, and cheese; ad droolium) and there’s sides and pantry provisions, too: sliced country ham, house-made pimento cheese, and so on in tasty Olamaie fashion. Also, pastry chef Jules Stoddart will be offering cookies, chocolate mousse, and a bake-at-home biscuit-dough cinnamon bun(!) Eventually you’ll have to switch allegiances again and again, though, as Brian Batch and Ryan McElroy’s online-ordering-only Bird Bird Biscuit takes over the old Thunderbird Coffee venue on Koenig (the java ops will relocate to a trailer in the parking lot) and doubles the savory power of the original (and still thriving) joint on Manor Road: That’s scheduled for the beginning of 2021.

Never mind the Bosporus, but the McGuire Moorman Hospitality and Austin Proper teams have launched contactless, curbside pick-up at the Peacock, that hotel-adjacent bastion of Mediterranean-inspired cuisine on West Second Street. Mezze plates, dips, sandwiches, family-style kebabs, and more are available for online ordering – and there’s outdoor dining for breakfast, lunch, dinner, and afternoon snacks, too, from Wednesday to Sunday.