Crema Bakery & Cafe Stands Up for the Austin Community

Seven years ago this week, Jessica Forkner Tomberlin and her wife Janessa opened Crema Bakery & Cafe, where they have a staff of 20 and do just about everything – brunch, lunch, sweets, espresso, custom cakes, other desserts, and wholesale. Since the beginning, the duo was community-focused, and the pandemic has only strengthened their efforts.

Forkner Tomberlin, whose background is in communications and nonprofit fundraising to help at-risk kids and families, lives in a neighborhood near the Southwest Austin cafe and they have a young child. “We've really become entrenched in the community.” In mid-March during the Austin ISD spring break, the couple realized the likelihood of anyone returning to school was slim. “We were concerned kids weren’t going to have anything to eat since schools were out and grocery stores were starting to be overrun, so we decided to post that we would offer a free sack lunch to anyone who wanted one – no questions asked,” says Forkner Tomberlin. They announced their plans and she said, “Within a day it had gone viral (for us) – thousands of likes and shares on [Facebook] and Instagram. In the first week, we served almost 200 free lunches.”

As pandemic restrictions started rapidly changing the way restaurants are able to conduct business, Forkner Tomberlin says their business dropped by 30% within the first 10 days, and they lost all of their wholesale accounts. “Things looked pretty dismal. When the mayor announced that restaurants had to switch to curbside/delivery only, we knew we'd have to lay off our staff if we didn't come up with another idea.”

“So we pushed all the furniture in our cafe against the walls, ordered a bunch of produce, dairy, and dry goods from our food service providers, and opened a grocery store. We now do online ordering of tons of staples – we're one of the few places that has been able to keep a steady supply of yeast and flour for all the people stress-baking to deal with this situation.”

Forkner Tomberlin says the grocery plan took off and helped boost their business, allowing Crema to retain their entire staff (“except for a few who have health concerns – they will have jobs with us when this is over”). She adds, “My wife and I work 10-12 hours a day every day to keep it stocked and orders filled. We’re luckier than most restaurants in that we quickly found another way to make ourselves useful and relevant to the public. We truly believe it's our job to feed people in whatever form they need.”

To date, around five weeks since they started, they’ve served more than 600 free bag lunches, delivered meals to Ronald McDonald House, donated pastries to various causes, and set up a table of produce and day-old items for anyone to take.

She adds, “What I do want is for people to realize when this is all over that small businesses are the ones who truly care about the people in our communities. We are KILLING ourselves day in and out to take care of our employees, our customers, and complete strangers because it’s the right thing to do – not because of money or popularity or any of that crap. Our businesses are barely hanging on, but we’re being good people.” 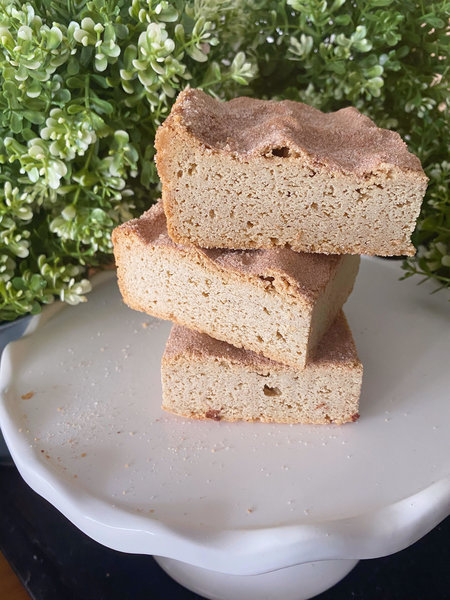 “These are a favorite right now – they're basically like a brownie version of a churro, and most people will have all the ingredients already, so they should be ‘quarantine kitchen compatible.’” – Jessica Forkner Tomberlin

1) Preheat the oven to 325 degrees. In a small bowl, whisk together the cinnamon and sugar.

2) Melt the butter in a pan over medium-low heat. Continue heating, stirring often, until the butter begins to smell nutty and brown on the bottom of the pan. Remove from heat and pour the brown butter, scraping the pan to get all of the brown bits, into a large bowl to cool.

3) Sift together the flour, baking powder, and salt. Pour the flour mixture, brown sugar and sugar into the bowl with the brown butter and stir to combine. Add the eggs and vanilla. Mix well.

4) Spread the batter into a parchment-lined 9x13-inch pan. Sprinkle top with cinnamon sugar. Bake for 35-40 minutes until cooked through. Cool in pan.