Full disclosure: I worked as a waiter at the Magnolia Cafe on Lake Austin Boulevard for 12 years. This will be a bit more than another objective piece of journalism. 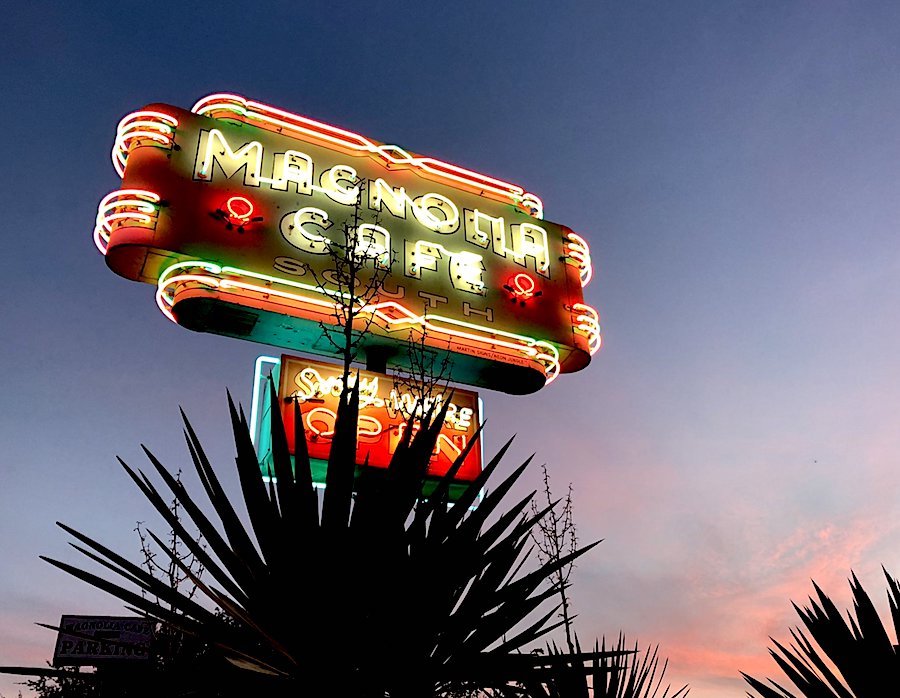 And another one abides the dust.

But let’s get the basic facts accounted for first.

The Magnolia Cafe started as Omelettry West in 1979. (Yes, it was originally a sister store of The Omelettry, and, yes, all those Kerbey Lane Cafes around town also started from the same entangled seed, and now everything’s all separated and scattered, because, well, you know – business and romance and the best laid plans of mice and men, etc., etc.)

And then, the name change; and then, by the time your reporter joined the scrappy crew of entrepreneurial neo-hippies and kitchen-savvy music-scene reprobates in 1991, the place went 24/7.

As the Magnolia’s own sign famously put it: SORRY, WE’RE OPEN.

But not anymore. Owner Kent Cole announced on the restaurant’s Facebook page on April 16: “Magnolia Cafe Lake Austin had a great 41 years offering our fare, our style and, most importantly, a place for people from the neighborhood and from all over the world to come together and do what people do best – have a meal and talk to each other. And we, our family and all the staff and management through the years got to do what makes people their best – take care of other people.”

(I’ll gladly corroborate those words, from back in the day, from the lower-echelon inside out. Even in more cynical times, what Kent said is true.)

But also: “Things have been slowing down there for the past few years,” continued the announcement. “In the face of such a huge hit with the reality of Covid-19 and the incredible uncertainty of the future, we’ve had to confront the fact that this location will not survive.”

The implication within that statement – a beautiful implication, for those who love the Magnolia as an institution, or who just appreciate classic diner food done exceptionally well and often with a Tex-Mex flair – is that the other Magnolia Cafe, the one on South Congress, will reopen, if possible, when the rest of Austin’s restaurants reopen.

So there’s at least that, which is no little thing.

Even in these difficult times: Small mercies everywhere.

But, ah fuck, my heart is breaking here. I’m still trying to process all the feels from Salvage Vanguard Theater being unhoused years ago, now I have to weather this as well? The sudden absence of that never-closed eatery that sustained me as a young single father, as a struggling creative, as a working-class human serving food to untold numbers of locals and tourists, for so long? Until The Austin Chronicle saw fit to hire me into a somewhat-less-grease-stained life of journalism?

I applied for a job at the Magnolia Cafe in the spring of 1991. I was 28. I walked in, sat down at the counter, ordered a coffee, asked for a job application. Turns out, the guy sitting next to me at the counter was the manager: Dave Wilson.

I didn’t realize that as I filled out the one-page form, as I handed it back to the waitress. But the guy motioned to the waitress, and she handed him my application. He glanced at it, looked at me over his glasses. I must’ve seemed a bit confused.

“Oh,” I said, shaking his hand, flashing what I hoped was a winning smile. “Uh, cool, because I’m, uh, I’m looking for a job. I’ve worked in restaurants for years, and, yeah – do you have any positions available? I can do whatever you need, but especially front-of-house. I’m a pretty good waiter.”

Dave looked at me, appraising. “You like bluegrass?” he said.

“Bluegrass?” Part of Flatt & Scruggs’ “Foggy Mountain Breakdown” flashed through my mind’s ear. “Uh, sure,” I said, “I like bluegrass.”

“Okay,” said Dave, setting the application aside. “We’re gonna start you as a host. You be here tomorrow at 2pm?”

And that was how I joined the Magnolia Cafe on Lake Austin Boulevard.

And now it’s decades later, citizen, and don’t you know there’s a virus on? And the Magnolia Cafe on Lake Austin Boulevard has unjoined itself from all of us forever.

Tell you what: Let’s get through this current situation intact, so we can meet up for a short stack of buttermilk pancakes and some migas con queso at the South Congress store over near Oltorf, okay? A bunch of us, and we’ll sit real close in a booth, swig fresh-brewed coffee and talk about Alejandro Jodorowsky or Leonora Carrington or Sartre or something – anything that’s not specifically pandemic-related, okay? Bluegrass. Hendrix. Whatever.