Start over (again) with the Year of the Rat 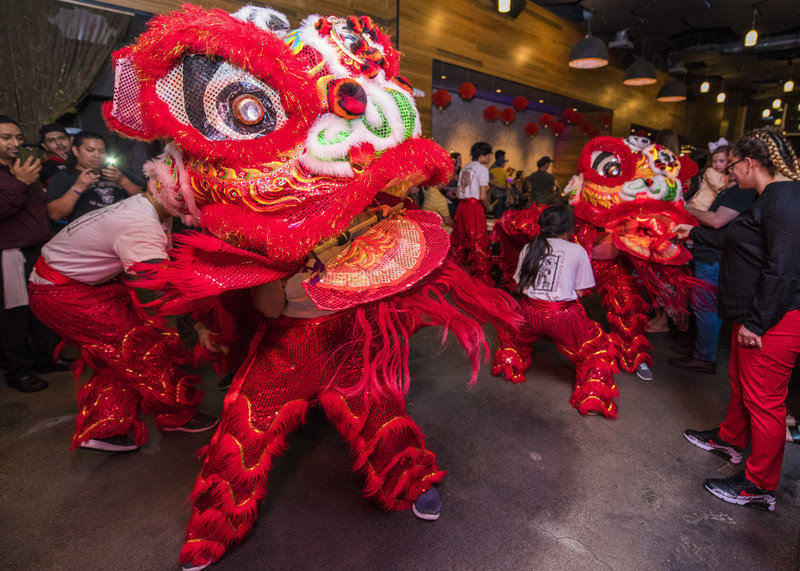 Lunar New Year 2018 at Wu Chow (Photo by David Brendan Hall)
Lunar New Year offers a host of opportunities to celebrate, starting the year off right (again) with plenty of tasty traditions, food and drink specials, and a bevy of celebrations all across Austin to ring in the Year of the Rat.

This hip coffee shop is celebrating the cultural and artistic traditions of the Chinese New Year with a night of arts and crafts. Enjoy Halcyon's special themed menu of food and drinks as you learn how to make and decorate red pockets – a traditional Chinese gift, usually given to children, that holds lucky money. BYO-Luck (and money!), they’ll provide the rest.

Celebrate Year of the Rat at Wu Chow

Downtown Dim Sum stalwarts Wu Chow are celebrating the Year of the Rat in high style, with four whole days of celebratory food and drink specials, plus a family-friendly grand finale party on Jan. 27. Come between Jan. 24-26 for thematically appropriate New Year’s dishes and drinks, and then celebrate on Jan. 27 with Lion Dancers, a face painter, balloon artist, Year of the Rat-themed photo booth. Drink specials include the Rat Royal, which benefits Austin Pets Alive! You can also donate to the organization by purchasing a specially-produced plushy rat. The kitchen will be closed, but there will be complimentary light bites to snack on as you enjoy the evening.

Ring in the New Year family-style at the North Austin Sichuan standby, which will be hosting two days of New Years celebrations. China Family will be running their regular menu, which includes a number of lucky new year foods. Diners will also be able to enjoy performances and a Chinese opera-themed photo booth. On Saturday, children under 18 will receive red envelopes to take home, hopefully containing some lucky swag! The over 18 crowd can enroll in the restaurant’s New Years gift card giveaway for $50 worth of credit.

Lefty’s is celebrating the spirit of New Year’s abundance with what they’re calling “all-you-can-consume rager of epic proportions.” Think bottomless tiki cocktails, and a menu of Chinese-American classics like General Tso’s chicken, beef with broccoli, fried rice, potstickers, and, naturally, crab rangoon. They promise that more surprises are in store, but we’re not sure how much more our stomachs can handle!

Take your celebrations to the next level (literally!) upstairs at Gin Bar. The fete includes a top shelf bar, dragon dance performances, and an upscale tasting menu of luxurious takes on Chinese New Year classics.

The good folks at China Spice on North Lamar know that sometimes – maybe especially in the Year of the Rat – eating with a big group of friends is the best way to celebrate. Thus comes their Lunar Chinese Banquet option, where you can reserve a table for $250 (there’s ten seats per table) and feast on Peking duck, lobster with ginger and scallions, steamed tilapia, snow pea leaves with Japanese tofu, a lamb hot pot, and more. Yes, there’ll be a lot of tasty food going on, to bring the new year in right – which is why you need to give ‘em one day advance notice for reserving the celebratory table.

Austin’s Taiwanese American Professionals Organization is ringing in the New Year with a Hot Pot Celebration at China Palace. The organization, which aims to connect, grow, and empower Austin’s Taiwanese American community, will be celebrating with all-you-can-eat hot pot (make sure to email the organizers in advance if you’re vegetarian or have other special dietary requests), plus a festive photo booth and special New Year’s desserts. The event is BYOB.

The Chinatown Center’s annual Lunar New Year’s bash is the grandaddy of Austin Chinese New Year celebrations. Held at the organization’s headquarters in North Austin, the event will feature celebratory dance performances, music, food, and firecrackers. If you’re feeling especially inspired by the celebration, stop by the nearby MT Supermarket to pick up the ingredients for an at-home Chinese New Year celebration of your own.