Help the Johnathan Aguilar Family by buying some pizza January 16

On Thursday January 16, the pizza gurus at all five Via 313 locations will be donating a portion of proceeds to help the family of Johnathan Aguilar, the victim of a deadly SoCo attack in early January. 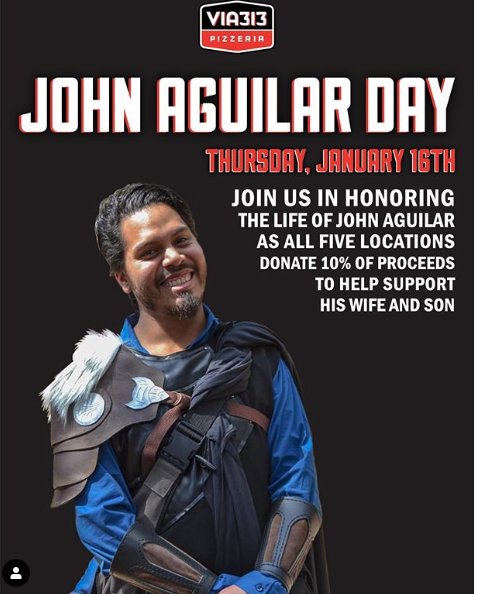 Their social media post reads, “Join us in honoring the life of John Aguilar as all five locations [of Via 313] donate 10% of proceeds to help support his wife and son.”

Johnathan Aguilar, the kitchen manager of Freebirds on South Congress, was killed during a violent incident on January 3. He had been an employee of the store for 13 years, and provided the sole income for his family.

About the attack, the Chronicle reported: “Austin Police have opened an internal investigation into an incident that occurred on the morning of Friday, Jan. 3, that resulted in the city's first homicide of the year. Johnathan Aguilar, a longtime Austin resident with deep Eastside roots, was stabbed while opening the Freebirds World Burrito on South Congress, which he managed. Aguilar, 34 and the father of a teenager, later died at the scene.”

An award-winning restaurant, AustinVia 313 serves Detroit-style pies, and their current special is Buffalo Chicken Pizza with chicken, bacon, red onion, gorgonzola, and buffalo sauce. (As a bonus, $1 from each of these pizzas will go to support Urban Roots all month.) The restaurant added, “Please join us in honoring his life and supporting the loved ones he leaves behind,” and included the hashtag #pizzawithapurpose.

Aguilar is survived by his wife and son, Amy and Daniel. His family is accepting donations through a GoFundMe page for anyone who is able to help.