For Terrah Rosecrans, stumbling into beekeeping was a happy accident. “I was introduced to beekeeping when I responded to a Craigslist ad for a job at Round Rock Honey,” she says. “The vibe of the warehouse was so interesting to me that I just knew I had to work there. Almost four years later, I am still here and can’t see myself doing anything else!” Courtesy of Round Rock Honey

Once at the farm, she quickly developed an affinity for her apian coworkers. “I love being around bees is because it adds a sense of calmness into my life,” says Rosecrans. “The buzzing sound of 8000 plus bees in an established hive is exhilarating to hear! Bees to me are just like my dogs, they’re family.”

As a beekeeper in a small operation, Rosecrans participates in every aspect of honey production, from tending the hives to bottling the honey. “My day starts around 8am,” she shares, “With me coming to warehouse and either getting prepped for what we are bottling that day, or making our famous Round Rock honey blend, fresh to bottle for that week's grocery store or our local farmers market.”

While their house blend might get all the love, Rosecrans’ favorite is buckwheat honey, which she loves for its distinctively pungent taste. “I’m from Upstate New York, where we actually have seasons,” she jokes, so she’s drawn to honey that’s distinctively seasonal. Different seasons have different kinds of flowers, each of which produces its own unique honey, and for Rosecrans that’s what makes buckwheat honey so special. “Buckwheat is not only yummy but also not something you can just get everyday!” she enthuses.

Really, though, there are few kinds of honey Rosecrans doesn’t appreciate – and few things she won’t put honey on! “You can add honey to everything from smoothies to ice cream to chicken nuggets or even your Easter ham!” she says. “I personally love honey with fruit and chili powder – it adds a sweet but salty taste.”

Just because she’s got a sweet job doesn’t mean Rosecrans’ work doesn’t occasionally have taxing moments. “Beekeeping in Texas can be brutal when it comes to summertime hive work,” she says. “You will sweat more than you can drink, so be sure to replenish the electrolytes you’ve lost.” 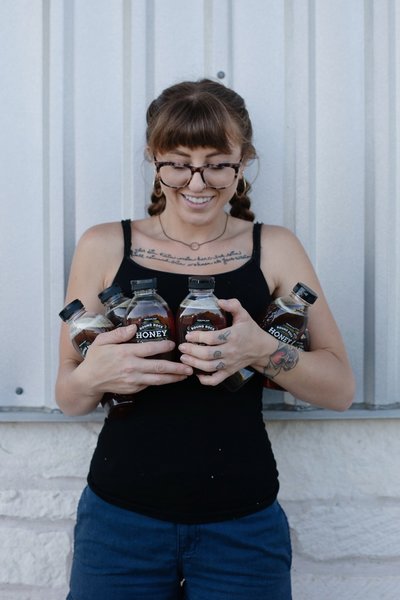 Fortunately, Texan beekeepers are a hardy and close-knit community, always on hand to offer assistance to novices. “The Williamson County community has a beekeepers association program which is full of really awesome beekeepers that want to actually help you with whatever questions you may have,” says Rosecrans. “And there are plenty of Facebook groups as well.” Terrah might even be able to help you out herself, at one of Round Rock Honey’s regular Saturday Honey House tours. “And once you're ready, check out our beekeeping classes too,” she says. “You never know, you may like it so much you become a backyard beekeeper yourself!”

For those of us who want to support our honeybee neighbors, but might not be ready to take a deep dive into the beekeeping community, Rosecrans suggestion is simple. “My recommendation for anyone trying to help the bees or just Mother Earth: Plant more! More flowers, more trees, just plant everything and anything.”

And where you can, she urges, plant using organic methods. “Pesticide usage has really taken a toll on not just honeybees, but every native pollinator too,” says Rosecrans. “Along with the recent horrific rainforest burning, it’s never a bad idea to help our planet by planting more plants.”