Excellent eateries to explore on foot 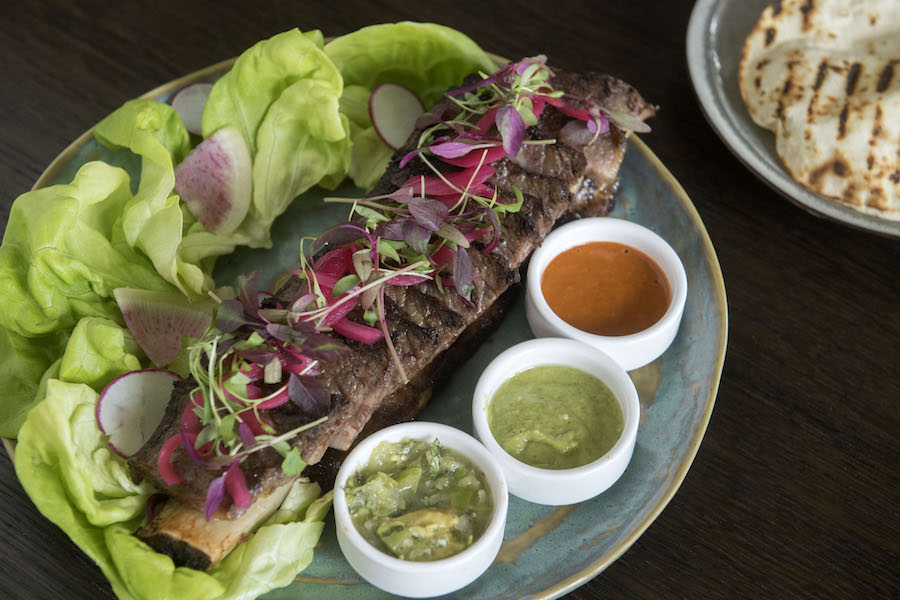 If you’re spending a day in Downtown Austin, don’t bother looking for a ride when you get hungry. All of these eateries are within walking distance.

900 W. 10th
The Austin pizza space is pretty tight these days, but we are blessed with a Neapolitan-style restaurant that specializes in pies both classic (margherita, pepperoni) and quirky (dandelion, boar) while also showcasing the versatility and deliciousness of vegetables.

201-B Brazos
New on the crowded Italian scene, “The Fox” offers one of the best cheese/charcuterie boards in town. Add to that a two-story ceiling, blue velvet, and candlelit chic plus a seasonal menu of grilled proteins, handmade pastas, delicate seafood, and a dark chocolate tart that will have even the most savory of your crew sneaking another bite. It’s a lovely balance of Southern meets Italian, with a sexy, sophisticated vibe.

110 San Antonio St. #170
Corn and family take center stage in this cocina. Much like what the restaurant’s menu does for the humble maize plant, the kitchen takes Mexican street food and elevates it to family-style dishes that feature grilled, smoked, and charred meat and peppers in combinations that will make you want más.

98 San Jacinto
The cycle of Mexican and Texan cuisine influencing each other is almost never-ending in Austin. However, that cycle may stop and start at Ciclo (in the Four Seasons Hotel), where a barbecued octopus can elicit as much excitement as locally sourced cabrito on gnocchi.

501 Colorado
On the heels of the surprise closure of his North Burnet French joint Bonhomie, Philip Speer tackles modern Mexican Downtown with his partners Gabe Erales and Alan Delgado. Here, au courant techniques mingle with ancient dishes, resulting in soul-satisfying moles and the kind of daring, out-of-the-box desserts upon which Speer built his reputation.

85 Rainey
Chef Iliana de la Vega has been focused on tradition for much longer than her Oaxaca-City-come-Rainey restaurant has been offering a taste of interior Mexico (since 2012, ftr). She’s a veteran of the local masa-making, comal-toasting, mole-crafting scene, so brave the hordes to taste her mole negro (featuring chilhuacle negro, guajillo, mulato, ancho, and more) and that guisada-ceviche power duo for brunch. 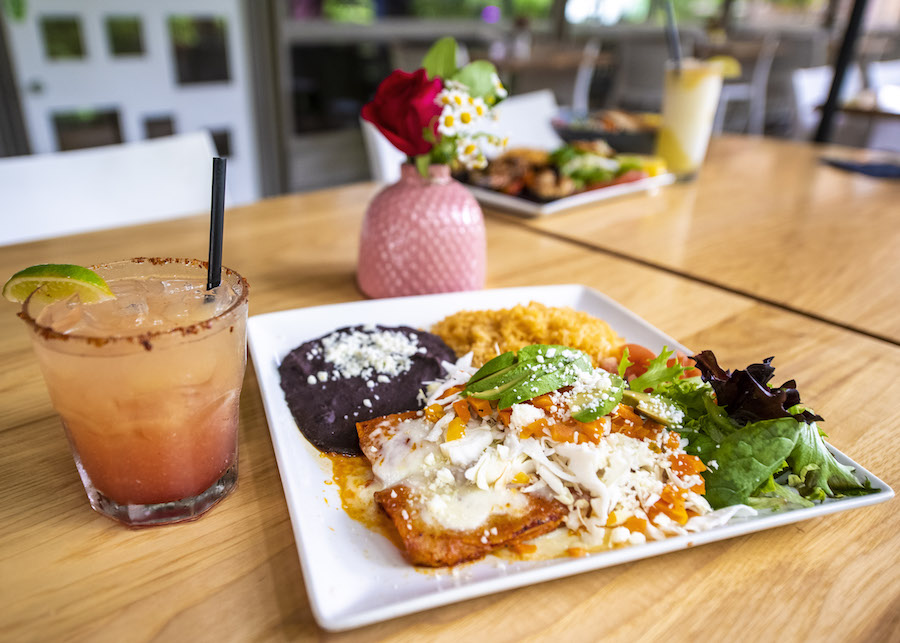 360 Nueces #10
Named Best Place to Start Off the Weekend by the Chronicle way back in 1999, Polvos has remained a mainstay. Offering a variety of interior Mexican dishes in a very casual setting, Polvos keeps you chill with its affordable brain-buster margs. This South First institution recently brought its something-for-everyone watering hole menus to Downtown in a sleek new location overlooking Shoal Creek, complete with dog-friendly patio.

900 Red River
If you ask an Austinite where to eat vegan food, 99.9% of the time, the immediate response is, “Arlo’s!” Plant-based but designed with carnivores in mind, the menu caters to late-night cravings, and they’ve absolutely mastered the art of meatless cheeseburgers with their famous Bac’n Cheezeburger. That Frito pie ain’t nothing to sneeze at either, friends. To really let you in on how special their trio of curbside eateries is, consider this: Arlo’s is the very first food trailer and only the second plant-based kitchen inducted into the Chronicle’s First Plates Hall of Fame. Austin’s plant-based comfort food baby is all grown up now.

710 W. Caesar Chavez
Located in the city’s stunning public library, this cafe allows diners to check out the world’s different cuisines all in one place. Inspired by cookbooks that are part of the library’s catalog (including our very own Virginia B. Wood’s memorial library), there is a certain cohesion to the family-photo-album approach in the kitchen. That’s what allows tamarind-peanut chili sauce to happily stand side by side with Burmese curry. 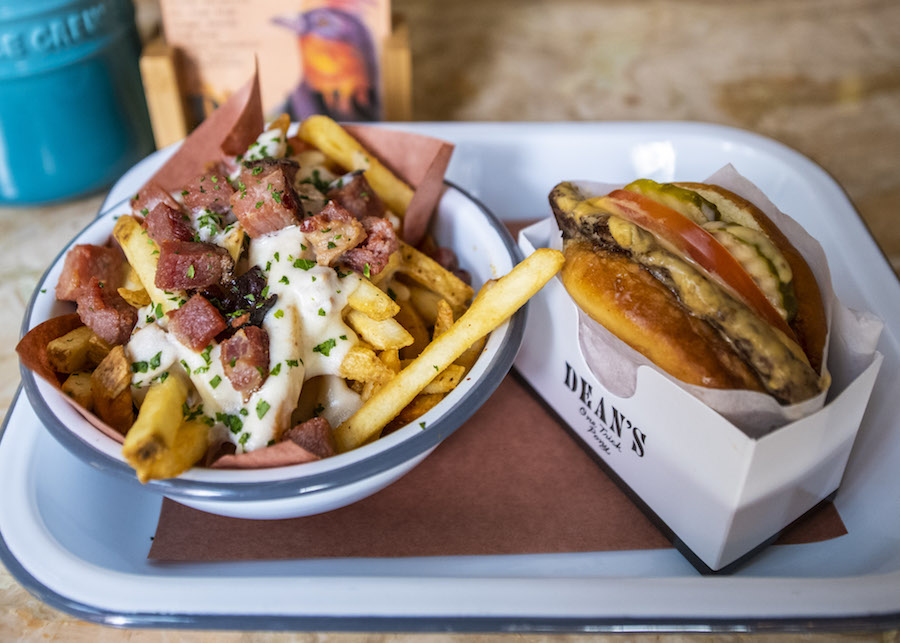 111 E. Ceasar Chavez
If Arlo Grey (by celebrity chef Kristen Kish) at the LINE Downtown is a little too chichi for your tastes, perhaps the hotel’s more casual Dean’s is more your speed. That is, if your speed is Don Draper’s backyard cookout: burgers, hot dogs, hot chicken, and a wedge salad, for God’s sake. Don’t forget the Ray-Bans when you go.

509 Rio Grande
Callie Speer’s Downtown diner has been outspokenly gluttonous and fun from the get-go, and Austinites have embraced the layering of comfort food, stoner snacks, and brunch, eschewing the suggestion that the punk rock angle might have been gimmicky. Holy Roller gives us permission to play with our food again.

110 San Antonio St.
This Downtown French brasserie boasts a menu that will take diners from Brittany to Paris and all the way down to the French Riviera. The words sprinkled with accents make the dishes sound haute gamme (aka fancy), but the important thing to know is that because butter and bread are used in abundance (tiny puffed pastries atop escargot!), everything is delicious. 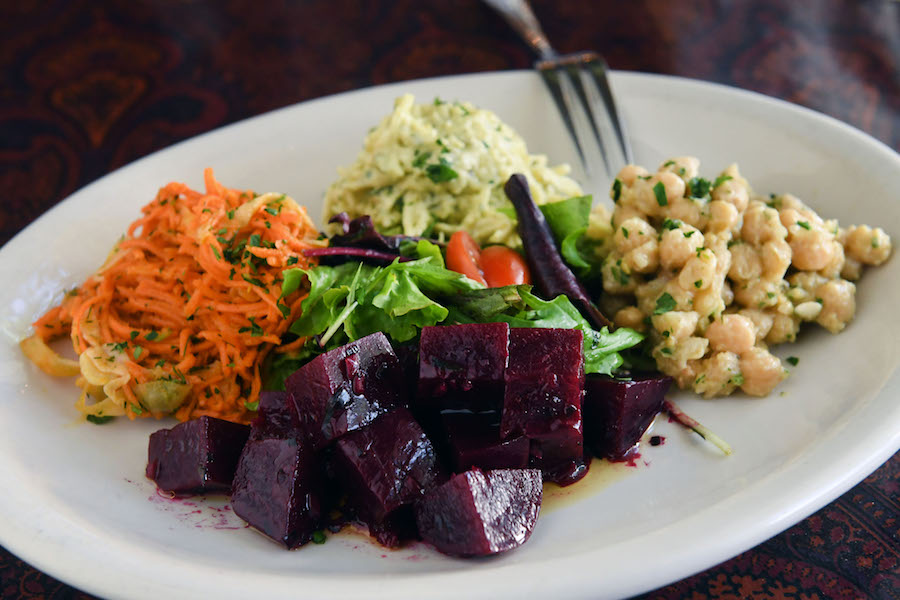 510 Neches
Comfort, warmth, and a dash of romance makes this little bistro live up to its name. Started by three Parisian friends in 1982, it’s a classic take on traditional French fare, and an excellent spot for relishing in conversation over escargots de Bourgogne and bubbles while hidden away from the Downtown melee. 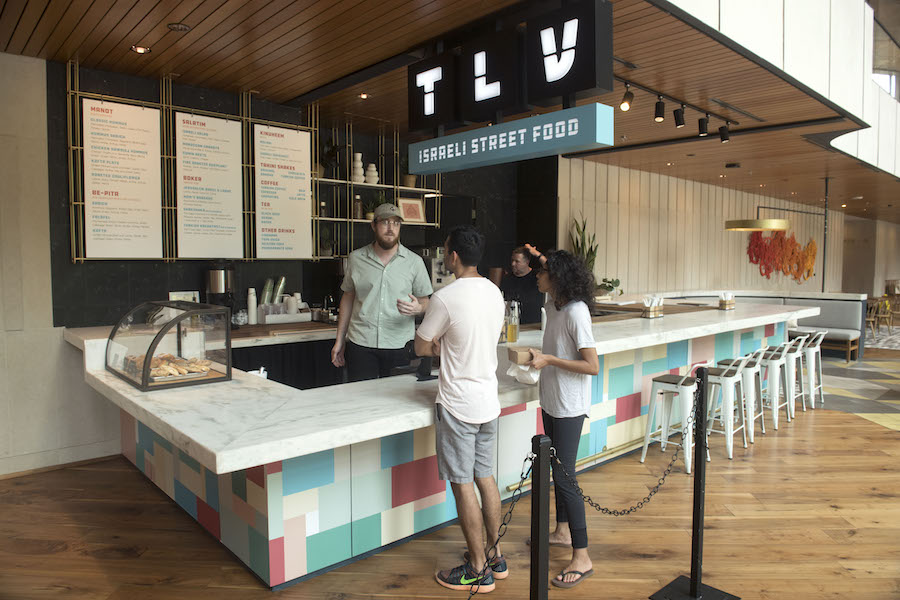 111 Congress
This upscale food court at Second and Congress has a little bit of everything, representing all corners of global cuisine. Stalls include: TLV, whose Israeli street food menu casts hummus in a lead role, supported by a cast of pillowy pita, Balkan pastries, filled Israeli donuts, and Turkish breakfast (and no matter the time of day, you need that tahini milkshake in your life); Ni-Komé, a sushi and ramen mash-up from Takehiro and Kayo Asazu (of Komé Sushi and Daruma Ramen fame); Contigo, cranking out quarter-, half-, and whole-bird rotisserie chicken, as well as a stealth candidate for best burger in town; the healthy-minded Henbit, Emmer & Rye’s little sister; Dai Due Taqueria, which distills chef-author-hunter Jesse Griffith’s cooking-as-ecological-responsibility ethos into a menu of Texas game, heirloom masa preparations, and agua frescas; and Italic, serving up rustic Italian pastas and salads.

Check out The Austin Chronicle's annual First Plates awards to find more of the best restaurants around town.