Juan Neave goes to Coney Island for the second time

Fans of food athletics rejoice: Austinite Juan Neave is set to compete for the second year in a row in Nathan’s Famous Hot Dog Eating Contest in Coney Island on July 4, 2019. 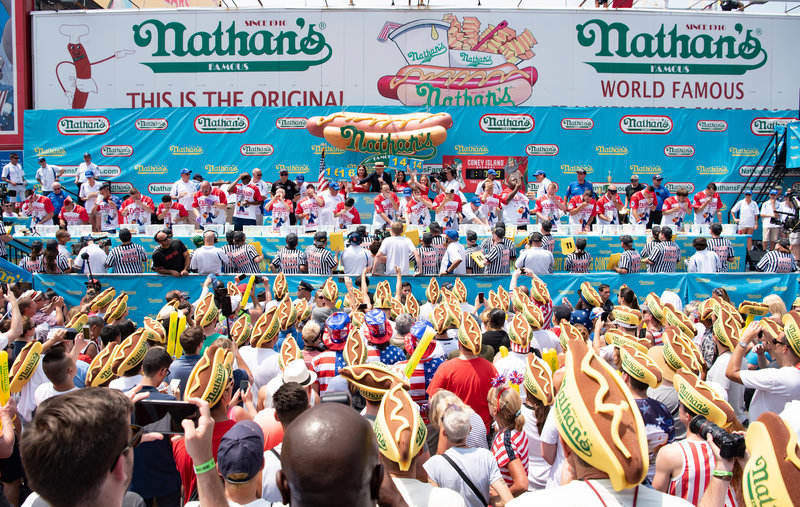 In 1916, a modest hot dog stand opened by Polish immigrants Nathan and Ida Handwerker became the historic site of the first Nathan’s Famous Hot Dog Eating Contest. This Independence Day, the corner of Surf and Stillwell will host thousands of spectators and the athletes themselves, competitive eaters from around the nation who have won one of 16 qualifying events.

Among the 18 male and 18 female contestants competing for the glory and the $20,000 cash prize, the most renowned of the male hot dog athletes will be in attendance. Last year, Joey Chestnut won the contest and set a world record with 74 dogs in 10 minutes, and this year his title is challenged by Geoffrey Esper of Oxford, MA, and Matt Stonie of San Jose, CA. Chestnut has serious competition from underdog Stonie, who previously shattered Chestnut’s winning streak in 2015 but conceded defeat in the following year.

The reigning champion of the women’s competition for five years in a row is Miki Sudo of Las Vegas, NV. In 2017, she set her personal best with 41 dogs in 10 minutes, just 4 dogs shy of the women’s world record. This year, Tucson’s Michelle Lesco poses the most serious threat to Sudo’s throne. The women’s competition will begin at 11am after a morning program of musical entertainment, and the men’s competition will follow at 12:30pm, continuing until the champion is crowned. But all this is not merely for the glory; Nathan’s Famous gives 100,000 hot dogs each year to the New York City Food Bank as part of the event.

Juan Neave, our local ambassador, attributes his drive to compete in part to the supportive Austin community: “After people find out I competitively eat, their faces instantly light up. The sport is fully accepted here in Austin and fits right in with the ‘Keep Austin Weird’ lifestyle, which has really motivated me to push myself further since it's not the weirdest thing happening here!” Neave adds that he is always seeking local hot dog purveyors to help him practice.

To experience what George Shea, the event’s emcee, deems “among the most dynamic and energetic of all July 4th celebrations...believed to be visible by telescope from Mars,” tune in to ESPN at 9:50am CST. Will Joey Chestnut remain undefeated? George Shea certainly seems to think so: “Joey Chestnut is a national treasure, and his victories shall be transcribed into every language known to history, including Klingon.” Mr. Neave, we wish you luck.