Texas becomes final state in the country to allow such sales 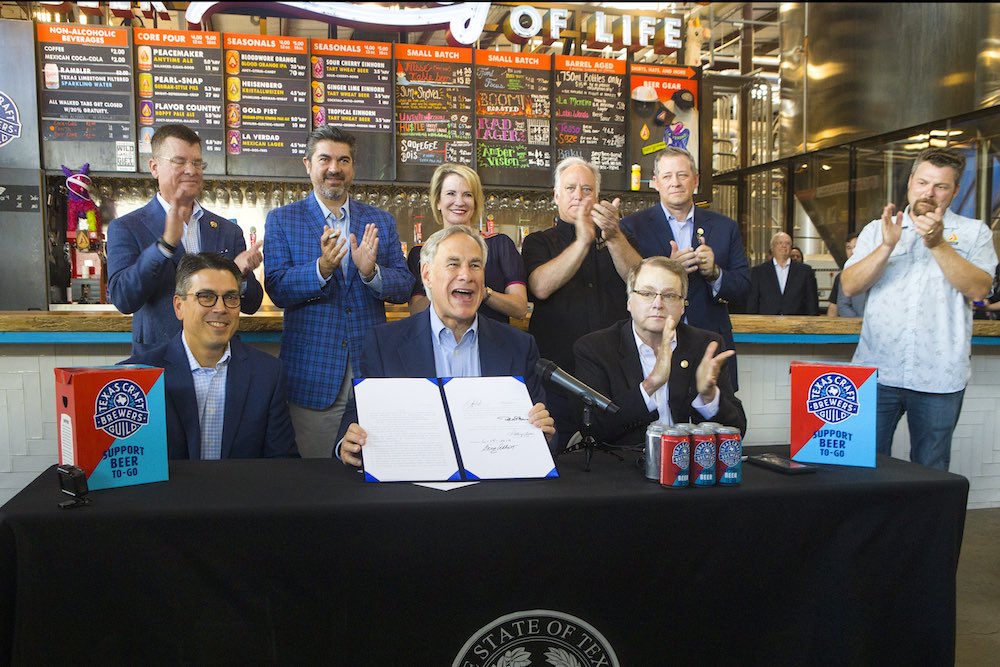 Good news for everyone not into drinking Rolling Rocks until sunrise at the Fiji house: Beer-to-Go in Texas is official!

As of Sept. 1, 2019, you can enter any craft brewery with a manufacturing license in Texas and (if the brewery participates) leave with take-away beer in the form of cans, bottles, growlers, or crowlers. Hell, collect all four! In a rather slick ceremony at Austin Beerworks – comprised mostly of pushy beer nerd types and very important government people in expensive fabrics at the spritely pre-gaming hour of 11am – Gov. Greg Abbott officially signed the TABC sunset bill into law. Along with it comes the Beer-to-Go amendment that evaded Texas’ small brewers for six consecutive legislative sessions.

Rep. Eddie Rodriguez, one of the champions of Beer-to-Go, took to Twitter to say, “Today is a historic day. Texas has joined the rest of the country and legalized Beer-to-Go sales at craft breweries. I’m proud to have led this fight together with Senator Dawn Buckingham and the Texas Craft Brewers Guild. Many argued that it wasn’t possible, not in the [Texas Legislature]. Beer-to-Go is the underdog victory of the 86th Legislative Session.

Texas is the final state in the country to allow off-premise sales from manufacturing craft breweries. Those are not to be mistaken for breweries with a brewpub license – Pinthouse Pizza, Hops & Grain, or Jester King, for example – who were already allowed by law to sell take-away beer in pre-packaged or on-site filled vessels with limitations.

Below is a list of breweries who currently hold manufacturing licenses in the Austin region who will now finally be allowed to sell beer-to-go if they so choose. Beer fans will be able to purchase up to one case per person per day as a compromise with the state’s main wholesale distributor alliances. The new law could also open new opportunities for packaging and further regional distribution to Austin for popular Texas breweries like Peticolas in Dallas.