Confession time: We kind of fell in love with Texas whiskey maker Garrison Brothers at Prohibition Creamery a while ago. 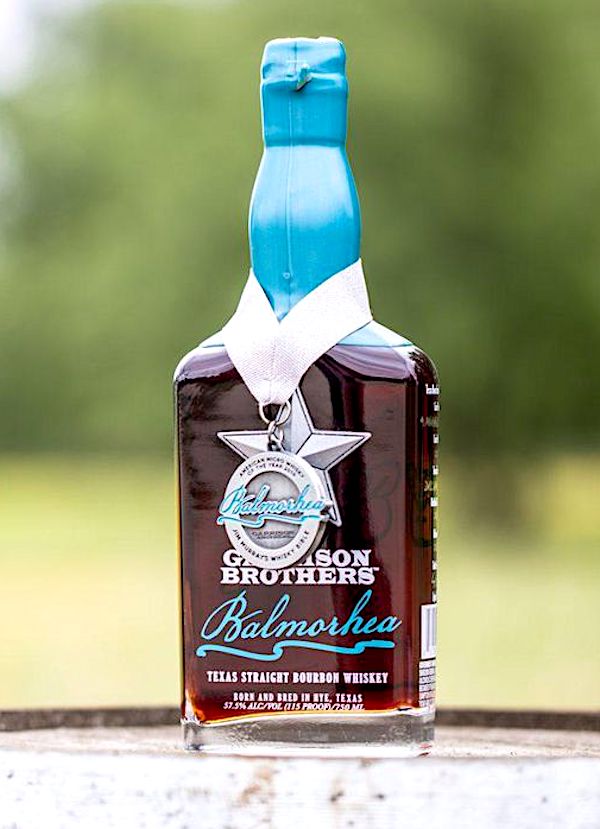 It was a whirlwind romance, with roses and hearts throbbing in mid-air all Scott Pilgrim-wise, and we figured we were probably riding a train to trainwreck town. But the whirling hasn’t stopped yet, and just the sight of a new G.B. bottle can still give us palpitations of liquor-based limerance.

But the thing that’s got us hoping that those Brothers will be like “Hey, baby, we should put a ring on it” is this boozy Father’s Day gift idea.

Because National Bourbon Day is coming up on June 14th, see?

And Father’s Day is June 16th.

And those Garrison Brothers have just re-released Balmorhea, the only twice-barreled bourbon in their tasty portfolio.

Now, we don’t know offhand the big honkin’ differences between Ozark white oak and Minnesota white oak – we’re not licensed arborealists or anything like that – but we’ll grant that it may be a noteworthy distinction to someone.

Molecules of flavor being what they are and all, right?

But, especially since Jim Murray’s Whisky Bible has gone ahead and named this latest expression of Balmorhea as the “American Micro Whiskey of the Year,” we’re thinking that one of those Garrison Brothers bottles would make a fine ol’ gift for a fine ol’ dad.

Challenge: There are millions and millions of dads in the world, and, even considering that many of those individuals are probably shitty fathers who don’t deserve diddly-squat … that still leaves a few million who are totally worthy of such a gift as a $140 bottle of this fancy bourbon. But there are only 6,000 bottles of Balmorhea available throughout 26 of these United States and six countries outside the USA.

Bonus: Five dollars from every bottle sold goes to benefit the Texas Parks and Wildlife Foundation.

So – if you’re considering using that Balmorhea twice-barreled bourbon as a gift to make your top pop hop for joy, citizen … well, you’d better get on it tout-de-goddam-suite!