Four Days of Hot Luck in a Nutshell

It’s simply the best food and music festival in Austin

By Jessi Cape and Rod Machen,

[Editor's note: Be sure to check out the entire Hot Luck Festival photo gallery as well as last week’s cover stories, The Women of Hot Luck and Hot Luck Music Headliners Dig Into the Festival Menu.] 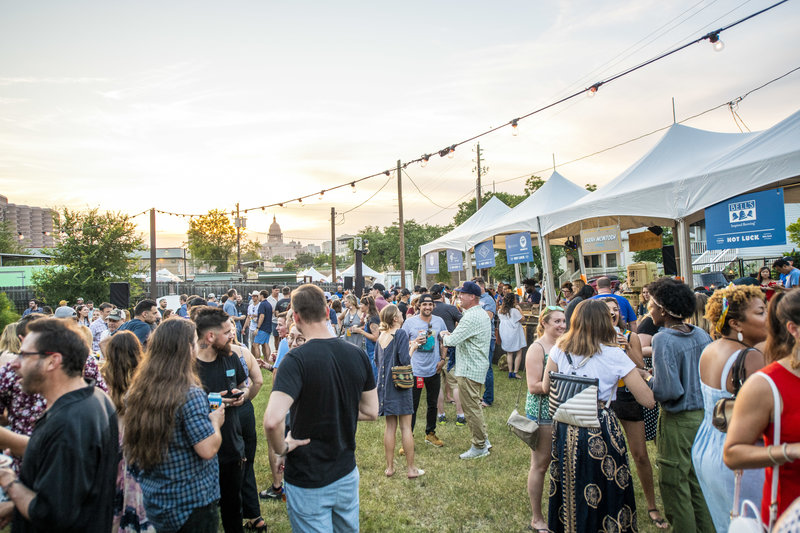 "Hi, How Are You?" event at Franklin Barbecue (Photo by David Brendan Hall)

The first two nights of Hot Luck Festival featured all the central tenets of this Austin-tacious event: great food with music to boot. As the nights get more sultry, these four days bring some much needed culinary cool.

This was my first time to attend, and from the beginning, the entire thing was easy and fun, just like it should be. Venues were full but not overly so, and with rare exceptions, I was able to sample everything the fest had to offer.

Thursday night’s Giddy Up event was held at the Mohawk, with every corner of the place hosting a different chef with a singular dish. Canadian iconoclast Matty Matheson offered up a sublime version of a fast food classic, the Beef ‘n Cheddar. Instead of gray meat and lifeless cheese sauce, this rendition featured thin-sliced top sirloin and a multitude of toppings, including Franklin BBQ sauce, horseradish, and of course, liquid cheese. It was as messy as it was delicious. 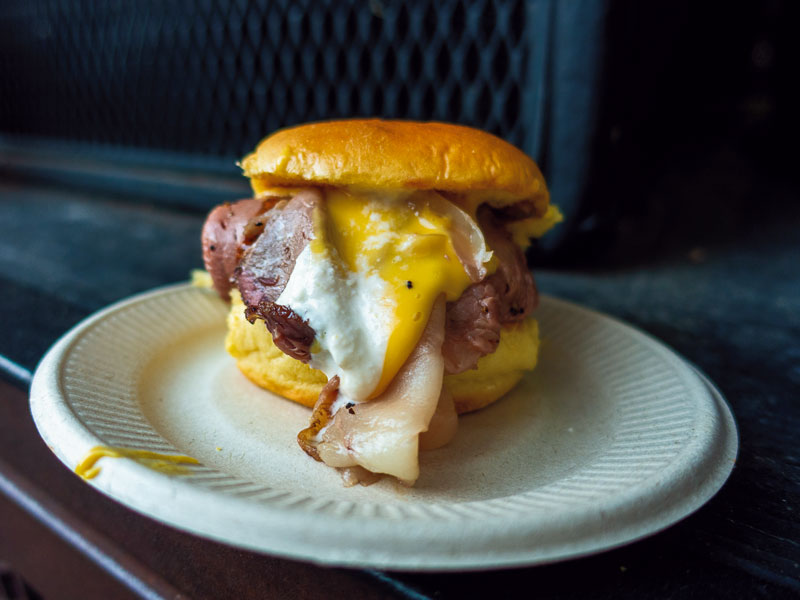 Chron cover girl Callie Speer of Holy Roller created the world’s best Chex mix, featuring homemade Cheez-Its and seasonings from every shade of the flavor spectrum. Likewise, Chad Dolezal of The Hightower made what was essentially gourmet cowboy grub: slices of hot links with beans, all over a piece of Texas Toast. Giddy up, indeed.

Yoshi Okai brought a mammoth tuna with him, and proceeded to hack, saw, and slice it into the most exquisite sashimi possible, with fresh wasabi, naturally. Right next to this was a booth serving caviar on a Ruffles potato chip, complete with store-bought creme fresh. It was a high-low whiplash of culinary practice.

As the night moved on, the Mohawk’s stage became the center of attention as several music acts performed for a very full crowd, culminating with Robert Ellis, the “Texas Piano Man” with his white suit and tails and catchy tunes for days. 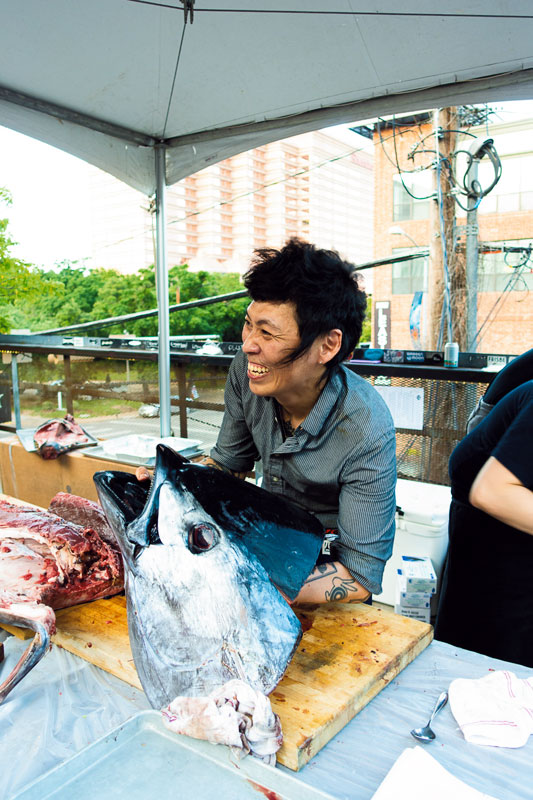 Friday’s Hi, How Are You shindig on the grounds of Franklin Barbecue was much bigger and just that much better. There was no live music but no shortage of amazing experiences for the adventurous eater.

The Franklin brisket had a long line. (Surprise!) And sold out. (Double surprise!) But there were plenty of other options, some not readily available to local audiences. The newcomer of the fest was the Maldonado family, with Ivana & Yamila serving an empanada that quickly became a crowd favorite. The tangy beef mixture inside was superseded only by the pastry-like packaging. Hot out of a wood-fired oven, these little pieces of glory were a treasure. The Houston duo has plans to move to Austin and open up their own place, Argentian restaurant Cuyo, in the coming months. When they do, it’s sure to be hit.

Portland’s Gabriel Rucker created what he called a “Cheeseburger Flauta.” I don’t know if they have Chili’s in Oregon, but this morsel was a Southwestern Eggroll taken to a whole ‘nother level. Sarah McIntosh of Epicerie used homemade Spam to make festival goers question everything they ever thought they knew about that most defamed of meat products. 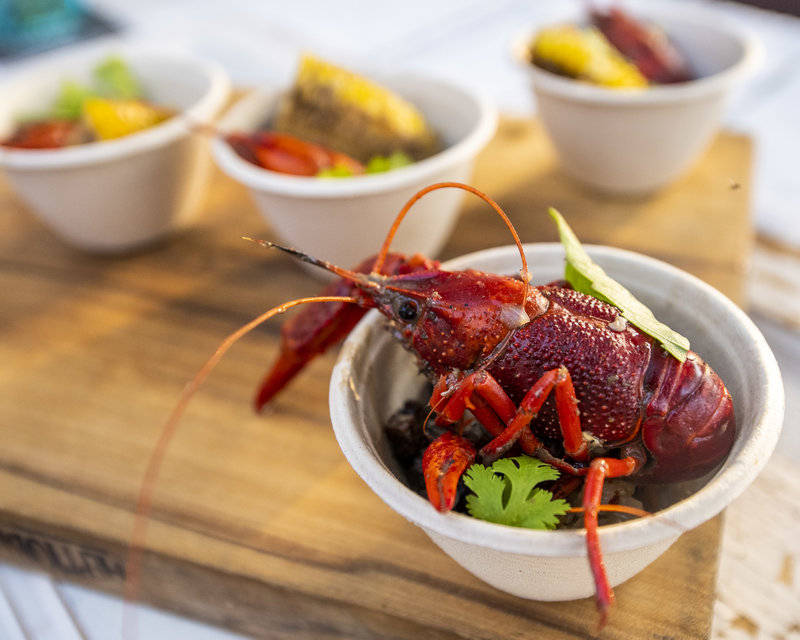 Lenoir’s crawfish and gumbo served during Hot Luck’s Hi, How Are You? at Franklin Barbecue (Photo by David Brendan Hall)

Todd Duplechan & Jess Maher Lenoir delivered a mini crawfish boil that was an awkward standing meal, but one that paid off in preparation and freshness. Fiore Tedesco of L'Oca d'Oro made possibly the most foodie-riffic concoction of the entire festival: confit short rib with Texas peach-fermented chile purée and lemon verbena oil, all served on a sourdough focaccia crostini. Whew. In spite of (or because of) this hyper-complex preparation, it was delicious.

In true Vanessa Williams-fashion, the most amazing bite of the night gets final billing. Emmer & Rye’s Tavel Bristol-Joseph gave the festival an absolute treat. His koji egg cream with wild, foraged dewberry and green coriander was three bites of heaven. Koji is a fermented mold popular throughout Asia, and its pairing with the fluffy and custardy egg cream made a morsel that was perfectly balanced between sweet and savory. It was so good, I only ate one; the guilt of possibly taking away the chance for someone else to try it would have been too much to bear.

While Hot Luck continues on through Sunday, the festival’s first half showed off exactly what Aaron Franklin, James Moody, and Mike Thelin hoped to accomplish with this Memorial Day weekend extravaganza. Chefs – both local and from around the country – get to experiment with a more-than-willing audience, while some good tunes play along. It has turned out to be a recipe for success. – Rod Machen

There’s only one less-than-ideal detail about Hot Luck’s main event, Al Fuego: It is virtually impossible for one human to consume all of the bites and sips (er, gulps) scattered across several acres of Hill Country beauty at Wild Onion Ranch. 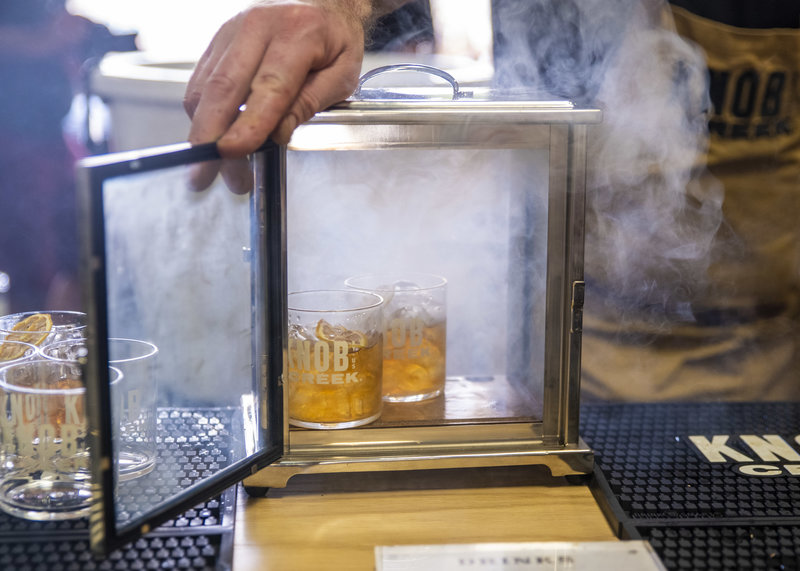 From the moment the gates opened, the lines stacked – it’s always fun to see a tangible display of social media buzz – with out-of-towners Fat Rice and Kismet in a neck-in-neck race with beloved local Suerte and their smoked goat taco with salsa verde. Knob Creek had a nifty set-up featuring smoke lanterns in which each and every free-poured (whoa, buddy) Old Fashioned was infused with the byproduct of that heavenly wood-fired grill. Phillip Speer repped his recently opened Comedor by showing off those dessert chops with a masa & lard whoopie pie; and chef Gabe Erales served up sotol-aged carne apache with salsa de yema, heirloom tostada. Other memorable bites (certainly not all, what with the craft beer/wine/cocktails at every turn) include, Salt & Time’s beef short rib pastrami gyro, the “Texas Coleslaw Massacre” (with grilled bacon, hot peppers, and coconut) from Pitchfork Pretty, Pizzeria Bianco's Rosa pizza slice, and a ham slider with banana pepper egg salad from Contigo. After one bite of Hotel Ella’s crispy skin Creekstone Farms pork belly with early summer fruit kimchi, my friend yelled, “How the hell did they make that cherry so savory?!” 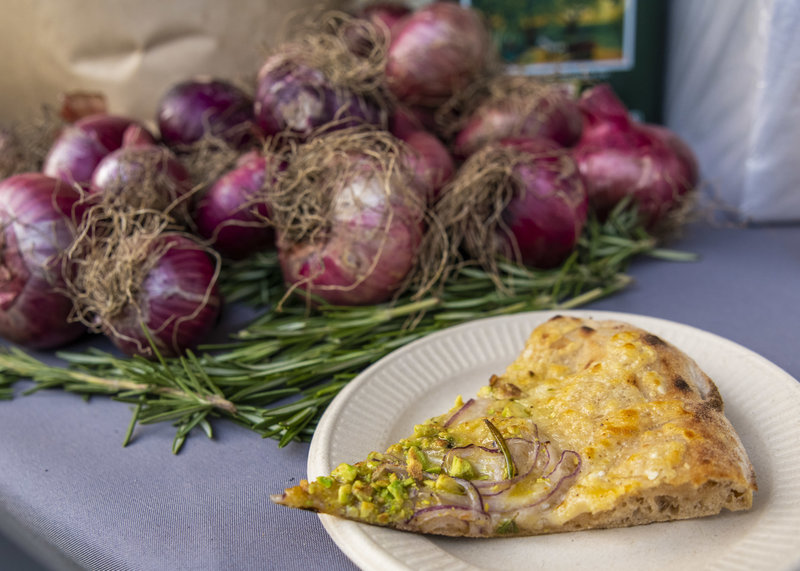 The not-so-long-and-winding road back from Wild Onion Ranch via school bus (they have seatbelts now!) was filled with raucous laughter and a covert make-out sesh or two.

For those with livers still in tact, and those who fully embrace the expandable waistline aesthetic, Sunday morning’s brunch, Coupe De Grille*, was a mass success. Probably my favorite event of all, the crowd was wonderfully packed into the Austin Speed Shop*, and with everyone chasing shade, the communal picnic tables created space for brand new friendships and rekindled food-world camaraderie. 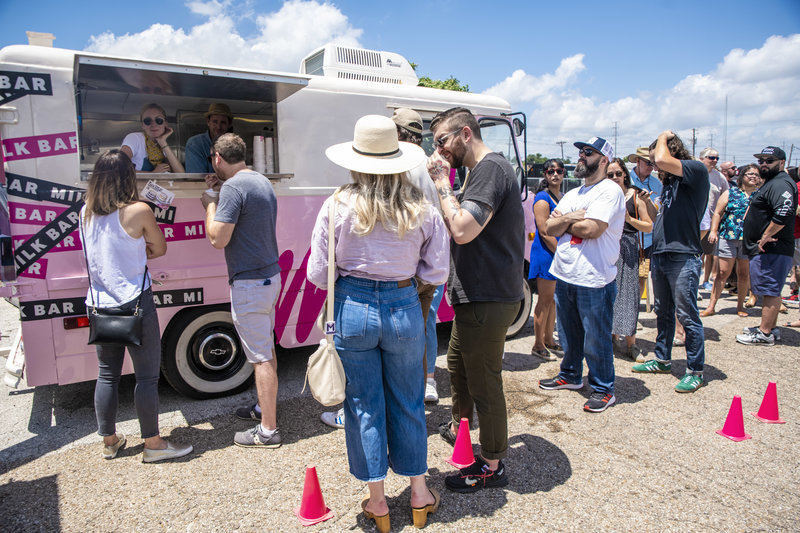 Naturally, there was a line around the sun for Christina Tosi’s Milk Bar cereal milk soft serve and toppings bar, with the head maven in attendance. Some other favorites include the meatball in vin jaune sauce by Justin Yu (Theodore Rex); Jesse Griffiths’ (Dai Due) wild boar pon haus; and Mason Hereford’s (Turkey & the Wolf) McHashbrowns and caviar.

Despite regretfully forgetting to reapply sunscreen and intentionally ignoring blisters in favor of fashionable footwear (I made an entire wishlist entitled “Stuff I Spotted at Hot Luck and Must Find Pronto”), there wasn’t a hiccup in the whole shebang. I’d like to be able to report on the Pok Pok closing party with Lucero, but I was at home watching Below Deck Mediterranean and online shopping by then. – Jessi Cape

[Editor's Note: We fixed the Sunday event name and location.]