Since 2006, Mercy Chefs and their network of mobile kitchens has been sending culinary professionals to areas facing crises and disaster. 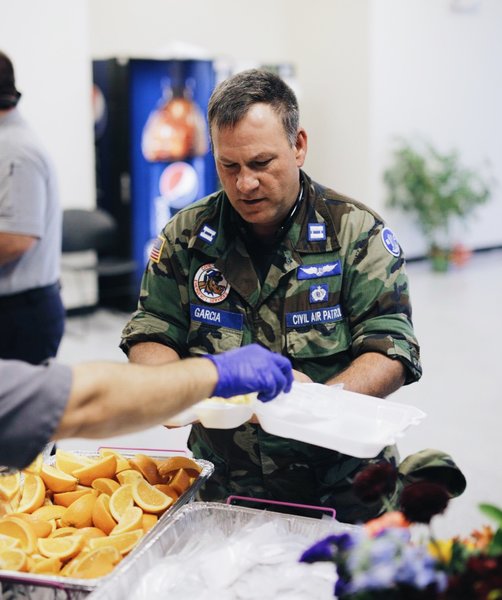 The staff and volunteers mobilize and trek to the disaster site where they prepare restaurant quality meals for victims, volunteers, and first responders, who often have a hard time remembering to eat in the midst of the chaos. With the help of Mercy Chefs, people facing the worst crises of their lives have access to a few solid meals to help boost their energy and give them the strength to continue their fight. Since its inception, the organization has served over two million meals.

Mercy Chefs has had a presence in Texas since they assisted in the aftermath of Hurricane Ike in 2008. Since then, they’ve responded to disasters in Texas including the fertilizer plant explosion in West Texas, the Houston floods, and most recently, Hurricane Harvey. And now they are opening their second response kitchen, stationed in Wimberley under the auspices of restaurateur and chef Jay Bachman, known for his Back Porch restaurant. Bachman will be the primary lead for the organization’s disaster response in Texas and within the larger region.

“It is always exciting when we get a great new chef on the team. It is even more exciting when something comes full circle. We first met Jay during the Wimberley floods, and he has volunteered with us for many disasters since,” says Gary LeBlanc, founder of Mercy Chefs. “Through Jay’s involvement as a volunteer, he is already very familiar with the unique DNA and culture of Mercy Chefs. The city of Wimberley is a very special place for Mercy Chefs – the town has embraced [us], and we are honored to have Jay join our team.”

Having another mobile response kitchen in Wimberley (the other is in Rogers County, OK) will allow Mercy Chefs to rapidly respond to emergency situations in Austin, San Antonio, Dallas/Fort Worth Metroplex, Houston, and Texas’ Gulf Coast. The kitchen’s first deployment will be to Lonesome Dove Ranch in Southlake, Texas.

A ribbon-cutting celebration will be held in partnership with the Wimberley Valley Chamber of Commerce on Wed., May 15, 4:30pm at Wimberley United Methodist Church, 1200 County Rd 1492, Wimberley, TX 78676.