An Interview With "The Julia Child of BBQ"

If there’s a national expert on barbecue and grilling, it’s Steven Raichlen. 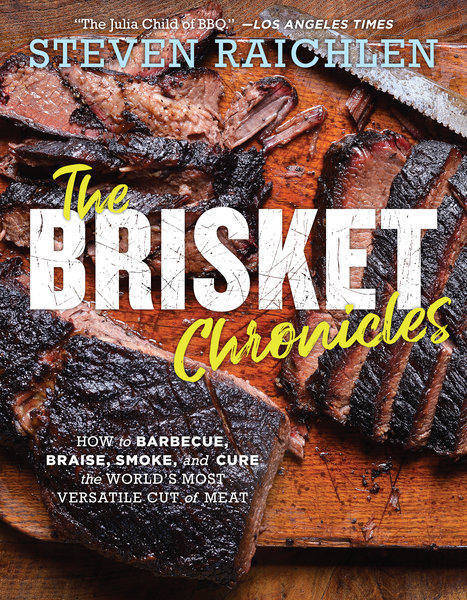 With more than 30 books to his name, Raichlen has covered the gamut when it comes to meat and fire. With his newest, The Brisket Chronicles: How to Barbecue, Braise, Smoke, and Cure the World’s Most Epic Cut of Meat, he attacks a cut of beef familiar to Texans, but shows how this food is indeed “epic.”

The new book drops April 30 from Workman Publishing, and Raichlen will be in Central Texas May 3-4 taking part in the State of Texas High School BBQ Championship in Burnet. The Chronicle spoke to him by phone in advance of his visit.

Austin Chronicle: So we'll start with the book, and I'll ask you about your upcoming visit to Texas as well. As I looked over it what blew me away was, I had never put together all of the different cultures and cuisines that claim brisket as an integral part of what they do. Can you talk a little bit about just how widespread it is in all of these different world cuisines?

Steven Raichlen: Well, I'm so glad you picked up on that, because that's exactly why I wrote the book. You come from a barbecue background, but brisket is what I call one of the world's great epic meats. It's epic precisely because so many cultures claim it. Of course, you know how it's claimed in the barbecue culture in America, and subdividing that more, how the Kansas City style differs from the Texas style. Starting in Europe – Eastern Europe in the case of pastrami, and in Ireland in the case of corned beef – those are two beloved, iconic uses of brisket that are very popular in North America. If you go above the border, pastrami becomes something called smoked meat in Montreal. Little bit different in that the brisket is dry rub-cured, rather than a brine cure like we do.

But then what really gets interesting is when you travel a little bit further afield. In the Caribbean and Central America, you'll find ropa vieja, which is braised, shredded brisket that's enlivened with tomatoes and peppers. You get to Korea and you'll find the world's only quick-cook, a grilled brisket popular in Korean grill parlors. You'll also find a soul food brisket in Korea that has an analog in Taiwan, and along the way there's nihari gosht, a braised, heavily spiced brisket, popular in Kashmir in northern India and Pakistan. But then you reach a second apotheosis in Vietnam, where brisket is kind of one of the cornerstones of pho, which is a Vietnamese beef noodle soup. So anytime you can travel around the world on a single food, you've got my attention.

AC: Absolutely. Barbecue, speaking broadly, is one of those cuisines originally created with what we might consider "cast-off" cuts. Is that how you see brisket, as having originally been used in the different cuisines around the world? SR: It's definitely a budget food, an economic food that unfortunately has become a victim of its own success, mainly because brisket has become relatively expensive compared to what it was 10-15 years ago. However, we're still talking a 12, 14, 16 pound slab of meat that feeds a lot of people, even if it costs you a hundred bucks. Then, if you look at the Asian application where in general, you have a little bit of meat as a condiment, and then a whole bunch of vegetables and rice noodles filling out the rest, it becomes very affordable. I interviewed Tootsie Tomanetz of Snow's Barbecue for the book, and she remembers grinding brisket up like hamburger, when she was a younger woman.

AC: I've read that researchers at Texas A&M were recommending people to start using brisket as a part of a ground beef mixture, because evidently it has a healthier kind of fat in it. I thought that was fascinating, that brisket, this thing we're all sort of familiar with, has some new applications that we hadn't thought of.

SR: Oh yeah, right, the brisket burgers. A lot of people will incorporate brisket into their burger mixture. The brisket in my book is a double-smoked brisket burger, and it's ground brisket meat as the body of the burger, studded with diced barbecue brisket. We just taped season two of my Project Fire show. We did the hamburgers there, and they were pretty fabulous.

SR: Well, on one level, I wrote a book on ribs, called Best Ribs Ever, which was another exploration of a single meat as it unfolds around the world. I think what's interesting about this book is, for me, it's not just barbecue. I was a food writer before I specialized in barbecue, and it's getting me back to topics and methods of cooking that I hadn't written about for 10 or 15 years. Braising for example. Boiling. I always make fun of boiling but in fact, boiling produces some pretty amazing briskets. Beef noodle soup is boiled. Italian bollito misto is boiled.

AC: Tell me a little bit about this event you're going to – judging at a high school barbecue competition? It sounds like the most Texas thing of all time, to get high schoolers barbecuing things.

SR: That's right, I'm judging and apparently I'm supposed to be giving a speech to a large group of graduating high school seniors. Talk about a terrifying prospect. It's funny because I've spent most of my life being nervous about kids around live fire and sharp knives, but in Texas that's behavior you guys encourage at an early age.