So Many Food Events This Weekend

It’s 4/20, Easter, Earth Day, and primetime for crawfish and Passover

Spring has sprung, and with the dreary gray winter quickly becoming a thing of the past, event season is in high gear. 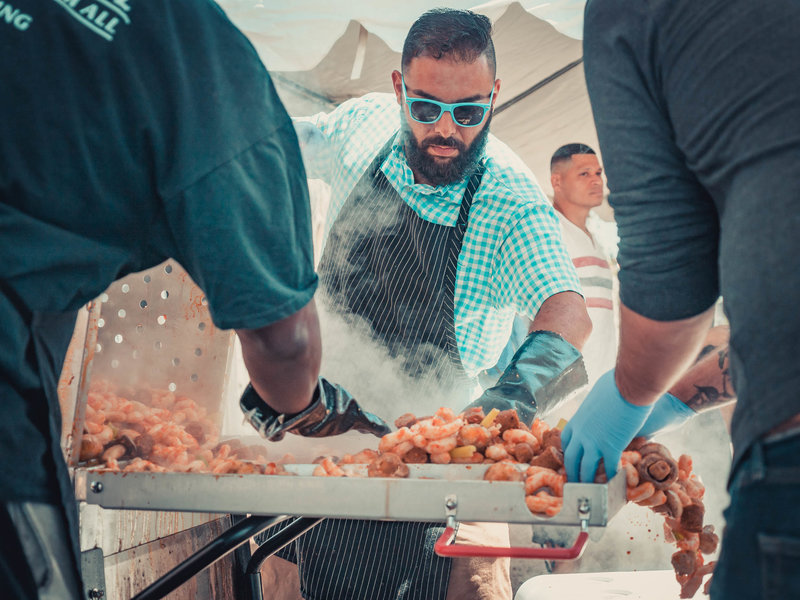 Celebrate 4/20 at Buzz Mill with Crawfish and Nahfish (Courtesy of Buzz Mill)
Plow Distribution and Plants Lead Our Way (PLOW) founder Isaac Mogannam is teaming up with Buzz Mill owner, Jason Sabala, to unite the community with an ultimate Crawfish and Nahfish boil on Saturday, April 20, 2-6pm. All of Austin – no matter their preferred diet – is welcome, and the event hopes to "bring more awareness to the plant-based movement while creating an atmosphere of community fueled by the rich culture of each business." Tickets are $15 on the Event page.

Over at The Peached Tortilla, Eric Silverstein is running a special preview menu in anticipation of the release of his new cookbook, “The Peached Tortilla: Modern Asian Comfort Food from Tokyo to Texas.” The menu will be available at the original Burnet Road location May 7-12, and will feature three courses of selections from the book at $27 a person. For the first course, choose between Japanese street corn (kewpie mayo, aonori, and bonito, kimchi arancini balls with aonori, wasabi, and sriracha aioli) and Mom's toast (chopped shrimp, ground pork, gochujang chili sauce, and fresh herbs). The second course is a choice of Korean short rib pappardelle (with nori brown butter, panko, and smoked creme fraiche), soy sauce chicken (with ginger scallion sauce and jasmine rice), Southern Fun braised brisket (with kale, bean sprouts, wide rice noodles), or their Tres Cauliflower (with grilled cauliflower, nori cauliflower puree, peach pickled cauliflower, and nori brown butter). Dessert is a choice of an Asian Movie Night sundae or matcha mousse.

On Sunday, April 21, 12-2pm, Scholz Garten will be hosting a bloody Mary fest, featuring local chefs and restaurants preparing their bloody best for a shot at the two awards (Judge’s and People’s Choice) plus live music from DJ Fontana and The Ripe. Tickets are $15 to attend and taste all the bloody Marys, and $10 for crawfish by the pound. Plus, the first 250 guests get swag including one complimentary Bloody Mary with their favorite mix from the day. Biderman’s Deli is taking preorders for Passover offerings to-go, with favorites like matzo balls (six for $10), chicken soup ($10 a quart), chopped liver ($4 a portion), and charoset ($12 a quart) available for pickup.

Between April 22-May 31, Jack Allen’s Kitchen and Salt Traders Coastal Cooking are partnering with Circle Brewing Co. to celebrate Earth Day by donating a portion of proceeds from each pint of Lady Bird IPA sold at any of the four Jack Allen’s Kitchens or at Salt Traders Coastal Cooking to Keep Austin Beautiful, an organization that empowers people to care for the environment by providing community resources, education, and volunteer opportunities. “We're hoping this partnership specifically highlights awareness in the community for clean water,” says Circle Brewing co-founder Ben Sabel. “Together, our partnership helps to bring awareness not only to the value of locally sourced ingredients, but underscore the importance that clean water has on the entire ecosystem. We're excited knowing our time and donations are going towards keeping our most vital ingredient clean for years to come.”

As we hit peak crawfish season, the folks at Spicy Boys & Zilker Brewing Co. are pairing up to create their first annual collaborative Skafish Boil on Sunday, April 28. Beginning at 12pm, attendees can head to Zilker Brewing Co. to grab a $20 first come, first served basket of Viet-Cajun Style Crawfish from Spicy Boys, cooked up with garlic butter, Thai basil, and secret seasoning, served with smoked sausage, potatoes, corn, roasted mushrooms and tomatoes, and a garlic baguette. Listen to ska while you chow down, with live ska from Hans Gruber & The Diehards, The Skatejects, and Los Kurados from 2-6pm.

On April 29, the team at Uchiko is hosting another installment of their popular maki rolling class in the restaurant’s private dining room. For $95 a head (plus tax and gratuity), participants can enjoy snacks, sake samples, and dessert while watching Uchiko sushi chefs demonstrate techniques for creating different styles of rolls while discussing the history of Maki. After the demo, guests will roll their own P-38 and crunchy tuna rolls, and the winner will receive a surprise prize.

Deep Eddy Vodka is opening a new tasting room facility at their Dripping Springs distillery on Saturday, May 4, with a grand opening celebration between 2-4pm featuring live music from Ready Betty. The new space, which will seat 200, will include a full-scale performance stage for their new lineup of concerts, including the Sips and Sounds Sunday event series, new bars adjoining the sill and bottling areas, as well as a 36-foot main bar, a new merchandise area, new bottling line, and – most excitingly for vodka fans – a new experimental still where Jason Ducharme will be experimenting with limited-run new vodka flavors.

While we're at it, the Austin-based distillery will release a special bottle, Authentic American, available exclusively during May (Memorial Day) through the Fourth of July. Deep Eddy will donate a portion of proceeds from this limited run of 20,000 cases to Folds of Honor, a nonprofit working to provide scholarships for the relatives of fallen military soldiers.

Pitchfork Pretty has launched “Hill Country Hooch & Hops,” a four part dinner series featuring the work of local bourbon and beer makers. Chef Max Snyder, will collaborate with four local libation-makers to create multi-course pairing menus showcasing fine beer and bourbon, in 30 seat dinners served family-style on the restaurant’s recently-completed veranda for $75 a head. The next dinner is May 8, with Independence Brewing Co., and then the June 12 dinner with Garrison Brothers Distillery. “Our team is excited to collaborate with some of our favorite Texas bourbon and beer makers,” said Pitchfork Pretty’s founder and owner, Seth Baas. “Max cooks from the heart, and these Hill Country libation artisans put passion into every elixir they create. I’m thrilled to showcase our Backyard Farm, Tableside Charm aesthetic.”