When the Bulleit Hits the Bon Appetit

Even if you’re not the sort of person who hangs out in bars and slams drink after drink while traveling the long and blinding road toward alcoholism. Even if you’re not the sort of regular citizen who sips a weekly cocktail or two so’s to savor the delightful taste and relaxing effects of it. Even if, for you, a tipple of any kind is a rare occurrence. 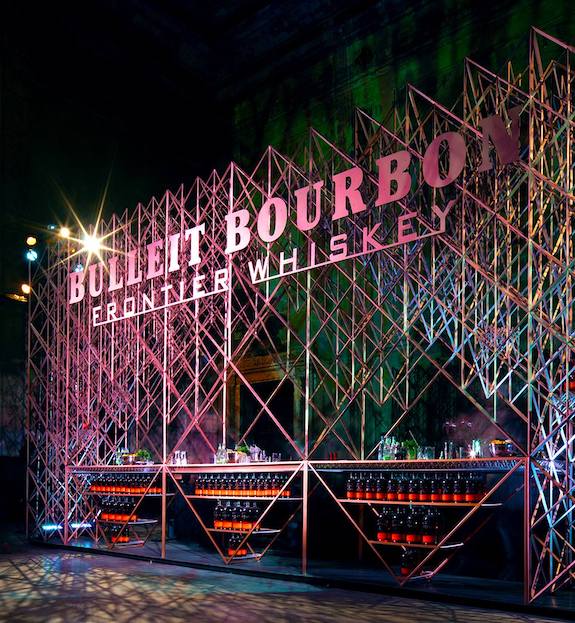 Seriously, this whole thing came out of a printer.

I’ve been a journalist at The Austin Chronicle for a couple of decades now. I’ve been covering the arts in particular, and over the last few years I’ve ventured into food-and-drink reportage.

And I noticed, after a while, that whenever I had a whiskey somewhere – just whiskey rocks, usually, or maybe with a bit of soda – and that simple drink tasted good enough for me to ask which brand was being poured, it was always the Bulleit.

And then – in the interests of scientific verification, in order to have a sort of floating, whattayacallit, control group – I started asking what the brand was when the drink didn’t taste exceptional.

And it was always, then, something other than the Bulleit.

And I’m a scattershot drinker, because I’ve come rather late to the game. And so, on the one hand, I’m passingly familiar with the high-toned single-malt whiskey choices of booze snobs, and I love them. (The whiskeys, not the snobs.) And I’ve been treated to the local brilliance that is Still Austin, and have encountered the inspired alchemy at Treaty Oak, and so on. But on the other hand, the more typical spirits of the world are within an area of my personal ignorance that is only slowly being eroded.

And – it’s one of the reasons I’m a journo – I’m basically an inquisitive fucker.

So I had to ask. I had to ask about this situation that seemed odd to me: this casually verified goodness of the Bulleit.

I asked a friend of mine, a writer who’s got about six years on me agewise and also has other reasons for knowing more about drinking as a steady activity. Turns out the Bulleit is a favorite of his, too – what he always asks for when it’s available, what he’s always glad to see among the bottles at a party.

I asked another friend, a web-media wrangler who’s about a decade younger than me but who’s more generally into alcohol and also prides himself on knowing stuff about things. “Yeah,” he said, “you know, there’s more high-end whiskeys or bourbons out there, and maybe those are gonna be better. But, at that price point – what you or I can usually afford – yeah, Bulleit’s probably the best. It’s what I drink.”

And that’s good to know.

It’s good to know, because I’m aware (from numerous billboards and print spreads and internet presences, et cetera) that Bulleit spends a not unlarge fortune on advertising their various products. And a fellow doesn’t like to think that he’s just being suckered in by some fancy-ass campaign of hype, y’know? And so my quasi-scientific research and peer-verification of the brand’s quality is downright, like, comforting.

Also, it’s because of the Bulleit budgeting what they do for promotion that I’m writing this blogpost in the first place.

No, dummy, I’m not talking about payola. I’m talking about, when the Bulleit throws a little hey-check-this-shit-out party in your hometown, the event is going to be the sort of deal that defines first-class experience. It might even be permanently linked, in the online worldbrain, with the word “elegant.”

At least, that was the case with this one thing I went to recently, where the Bulleit had set up their 3-D Printed Frontier and the whole shindig was themed around 3-D printed innovations that were so impressive that they achieved promotional escape velocity and left The Sad Planet of Mere Gimmickry far behind.

[Look, let’s get this said: If it wasn’t so terrific, I wouldn’t be telling you about it. I’m a workin’ journo, okay? I’m always being wined and dined and treated to things – companies are constantly showering me and my associates with free products and experiences all the fucking time – it’s an almost embarrassing situation. And it might seem like I only have good things to say about a product, a company, a brand, right? But, no: I just don’t waste my time writing about the inferior shit, the products or experiences that are less than. No, for real. The best stuff is only the tip, and the bad stuff is the rest of the iceberg that you’ll never see. Because, hell, I never have the time to tell you about all of the good things, even – it’s like a kind of triage is required in this, ah, this reportorial battlefield. So, yeah, I’m not going to expend any effort on dissing the mediocre or worse. Which means that the things I do go on about? They’re all gonna be worth your while. Or, at the very least, I found them well worth my while. Are we clear on that?]

So the Bulleit’s doing this nationwide tour of their 3-D theme, and it started in San Francisco, and Austin was the second stop on their schedule. And from the very start in this town, they were kicking ass: They rented – instead of some typical, ho-hum event center – an old warehouse over in what used to be an industrial area near the railroad tracks along West Fifth. And then they transformed the interior of that massive space into a sort of 3-D printed Bulleit wonderland.

(Look at the accompanying photos here: the enormous bar structure they had printed, and, immediately below this paragraph, that nyaaah-nyaaah-in-your-face poster explaining the printed bar.) 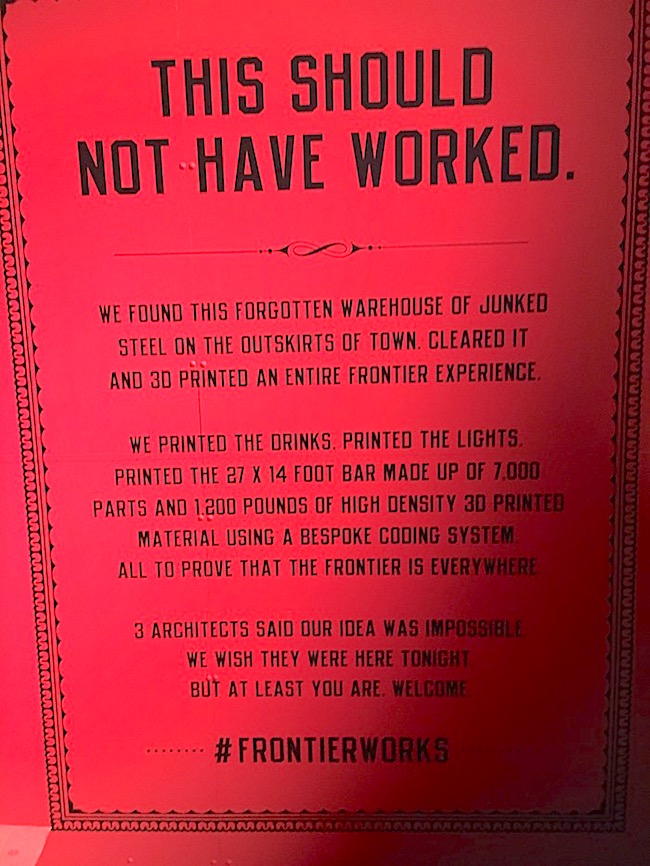 So just from an engineering standpoint, just to gawk at What New Technology Hath Wrought, this was a good party to attend. And the drinks themselves – well, I’ve already yammered at you about the Bulleit’s high quality. And the night’s specialty drinks were mixed by pros, and there was also a separate bar for Old Fashioneds on tap, where the ’tender would simply enhance each glass with an orange peel after dispensing the heavenly elixir … so that was already a win.

But then there was Benjamin Greimel and his three-dimensional liquid printing machine, whereby Greimel, this German robotics wizard, has come up with a way to print stable pointillist structures (a skull, a pyramid, a corporate logo) right into the midst of a liquid matrix – a cocktail, say – and – look, I know it might sound a bit lame at first, right? Which is why I clicked over to this site for a look before I left for the party.

Yeah, you see? And the printing “ink” in this case is, like, citrus oil or something. In other words, it’s liquid that might be added to a cocktail just to improve its flavor anyway. Pretty goddam nifty, tell you what. And Greimel himself was right there at the party, surrounded by a small crowd, working his robot arm and printing things in each whiskey-filled glass that was handed to him.

So that’s another bit of evidence.

Also, if you’re serving drinks and the whole night is built around a whiskey company’s promotion, then you’d damned well better provide some noms. To absorb some of that potent alcohol, right? To keep those pyloric sphincters good & stoppered.

Not to mention that providing an array of tasty food is just a good hostly thing to do.

Well, again, I’m sorry if I gush, but goddamnit. I even wrote to the publicist after the event to find out who’d done the catering. And, I kid you not, he told me that “due to some licensing laws, I cannot disclose the caterer.” Which is bothersome and repressive and makes me want to rage against a machine and form a militia and hoard cans of Dinty Moore Beef Stew in preparation for the end times … but my basic point remains. And that point is: In the SXSW’d-up weeks that followed, I went to four different PR events that were actual sit-down meals – and it wasn’t until the third of those that the food finally matched the excellence of the phalanx after phalanx of merely passed appetizers at the Bulleit gig.

The evidence, it begins to pile up.

And, meanwhile, remember: It’s a party that’s happening. So while all the eating and drinking and milling about and digging those 3-D gewgaws is going on, there’s gotta be some music.

And ol’ Bulleit, why, they’re a big corporate entity from way outside of Texas. They’re just one small part of the international, London-based Diageo conglomerate now – what the fuck do they know about what’s good and cool in Austin?

Um: A sufficient amount, as it turns out. Because they had the whole warehouse rocking with live sets from that heavy-hitting, brass-forward, Hard Proof outfit and from poptastic powerhouse Walker Lukens. And before those acts pretty much burned down the house, the incoming crowd was grooving joyously as Chulita Vinyl Club worked the DJ duties.

TL;DR: Maybe you don’t agree that Bulleit’s bourbons and rye whiskeys are the pinnacle of spirited goodness in what bean-counting MBA-holes would call “Their Sector of the Market,” because à chacun son goût and your mileage may vary. Okay, whatever.

But this much is indisputable: No one produces a better curated, more smoothly run, more crowd-pleasing experience to promote their wares.