10 Crawfish Boils to Get Your Season Started

It’s crawfish season in Central Texas, and that means boils, and lots of ‘em.

Whether you’ve been peeling yabbies since you pulled ‘em out of the creek with your grandpappy, or you’re a transplant entirely new to the mudbug game, there are few gustatory pleasures more elemental than rolling up your sleeves and diving into a pile of the critters, cracking shells and sucking out the juices, unconcerned with dignity, in pursuit of those exclusively sweet little nibbles of mountain lobster flesh. That, a cold beer, and a little live music makes for a pretty perfect Texas springtime afternoon. 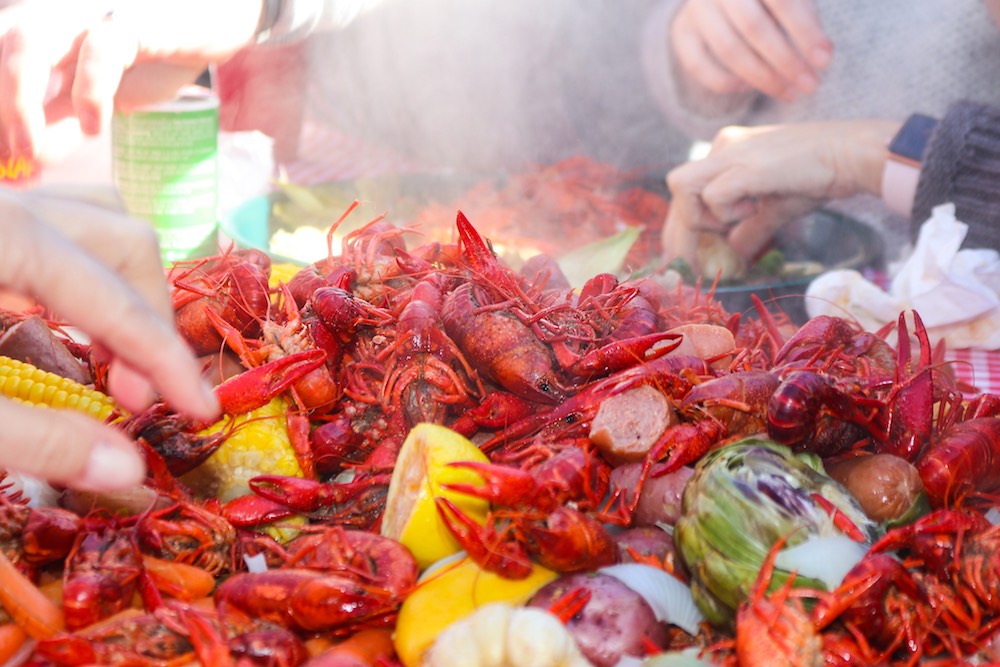 For those less inclined to getting their hands dirty, Ramen Tatsu-Ya is bringing back their annual crawmen special (get it?) to all locations from now until the end of crawfish season, a brothless crawfish mazemen made with tsukemen tare, crawfish tails, and flavors of the boil. There will be limited quantities of the special available each day at the shop, but fear not! If they run out you can console yourself with a limited edition t-shirt celebrating the event.

The Capital Crawfish Company will be coming out to Star Bar on April 6, 12pm, offering a fantastic $10 per pound special, or for the very ambitious, $30 all-you-can-eat deal, and at Gibson Street Bar every Saturday and Sunday in April.

Up in Hye on Saturday, March 30, William Chris Vineyards will be hosting their Spring Concert and Crawfish Boil. Tickets, which are $40 for anyone over 12, include a shrimp and crawfish boil with corn, potatoes, and sausage catered by Wahoo's Seafood, as well as live music from roots artist Carson McHone. Wines from William Chris will be available for purchase by the glass and bottle.

Every Wednesday for the rest of spring, COVER 2 will be hosting all-day crawfish boils from 11am-10pm, or whenever they run out of crawfish. Crawfish enthusiasts can take the purist approach with boiled, hot sauce tossed crawfish for $9.95, or upgrade to loaded crawfish with mushrooms, sausage, corn and potatoes for an extra $3.95.

And every Sunday through June 2, from 2pm until they run out, the Rustic Tap Beer Garden will be slinging $18 boils, including three pounds of crawfish, served with sides of sausage, corn, potatoes, mushrooms, live music, and bar games like giant beer pong.

Pinch Boil House is hosting a Sour Saturday crawfish boil at Blue Owl Brewing on Saturday March 30, from 12-4pm, or whenever they run out. Alongside the crawfish, boil attendees can purchase a Blue Owl tasting glass, with four pours of their beloved sour beer creations.

If you’ve got a bigger stomach than any by the pound boil could satisfy, The Local Post Pub is hosting an all you can eat crawfish boil on Saturday March 30, with tickets running $18 in advance and $25 at the door. Plus, there will be $4 Mi Campo margaritas on special all day, so the lil guys’ll have something to swim around in.

For the dwellers way down South, or in New Braunfels, Riley's Tavern's Annual Crawfish Boil is April 6, 4-7pm, and features Jean-Pierre and the Zydeco Angels. It’s just $15 per plate with all the fixins.

TLC is hosting their 2nd Annual Crawfish Boil on April 6, 10am-6pm, or whenever they run out (are you sensing a trend here?). You can go the gluttonous $35 all-you-can-eat (per person) route or stick to moderation with $10 per pound. There will be plenty of drink specials, live music with James Speer and the Experience, face painting, and a magician! For the party members who really don’t get into the whole crawdad thing, TLC also just announced $10 weekday lunch specials with an add-on $5 adult beverage.