Priest had stashed a small cookbook that he worked on with several former Austin chefs to catalogue the notoriously tasty menu from Armadillo World Headquarters.

Best known as one of our premiere local music venues in the Seventies, The ‘Dillo was also lowkey famous for its Tex Mex comfort food. Some of music’s biggest names fell in love with the simple but legendary dishes which were all designed to work well in a concert setting. Priest, in charge of creating all of the posters for Armadillo and considered “the godfather of poster art,” died in September 2018. We caught up with Leea Mechling to get some details about the new discovery.

Austin Chronicle: I understand the cookbook was found while staging the Micael Priest exhibit for SouthPop. Tell me more about the discovery.

Leea Mechling: I was looking through my music art collection (DilloGIrl Art Archive) and found the original art and a few of the brochures. There aren't any other known copies. In 1976, Rory (an employee in the kitchen) and I wanted to make this to hand out during the Christmas Bazaar. We sat with Micael and gave him the recipes. When he was doing the actual layout it was clear the recipes wouldn't fit so he shortened them...without getting guidance from me or Rory. We are going to display the original art and the brochure in the Micael Priest exhibit. We haven't made any plans to reprint it but the remaining copies of the original might be given to special patron level members as a joining gift.

AC: Please tell me more about the Armadillo WHQ Kitchen/Cafe. I know it was a nightclub, so was there a kitchen in the back and counter service, or table service? Was it a standalone cafe? What was it like? 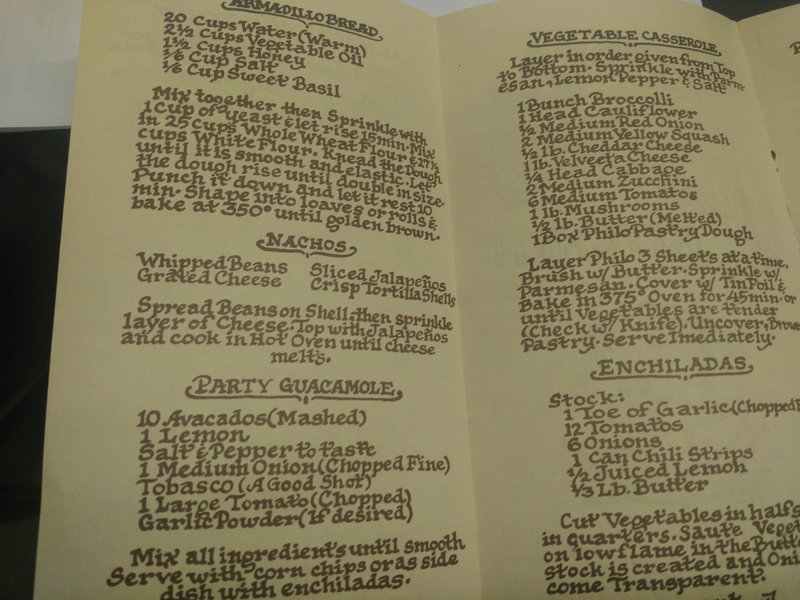 Recipes from the Armadillo HQ cookbook (Courtesy of SouthPop)

LM: The kitchen was near the back but had a counter that faced into the concert hall. There was another counter in the back at the beer garden. We had waitresses in the beer garden. The food was down home cooking with a hippie slant. No fried food. We baked our own bread (my sister, Michelle, really perfected the bread recipe and created AWHQ crackers). There was a daily special and an assortment of cold and hot foods. Sometimes we'd give the first 10 people of the day their meal for free.

AC: Who wrote the recipes and what are some of the best dishes?

LM: There were several people who created the recipes. Jan Beeman, Pam Ware, Big Rikke, Michelle Mechling Myers and these were updated as time went by. The sour cream enchiladas were a favorite, the roast chicken plate, and the NACHOS. The nachos were the best in the world.

AC: What are some of the most notable musician stories associated with the recipes and cafe?

LM: The Beach Boys had it put in their rider if they performed within a 150 mile radius of Austin, the AWHQ was to provide their food. Van Morrison came back and played an extra show to get some more of Jan Beeman's sour cream enchiladas. The Talking Heads didn't know what the heck nachos were....but David Byrne caught on quick. He loved them.

The Micael Priest show at SouthPop, which features the cookbook, is open March 10 - June 30.