Is Austin’s Prohibition Creamery Too Sweet For Booze?

If you like the taste of ice cream – really good, handcrafted ice cream – and you also like booze, then the idea of mixing the two won’t seem odd at all 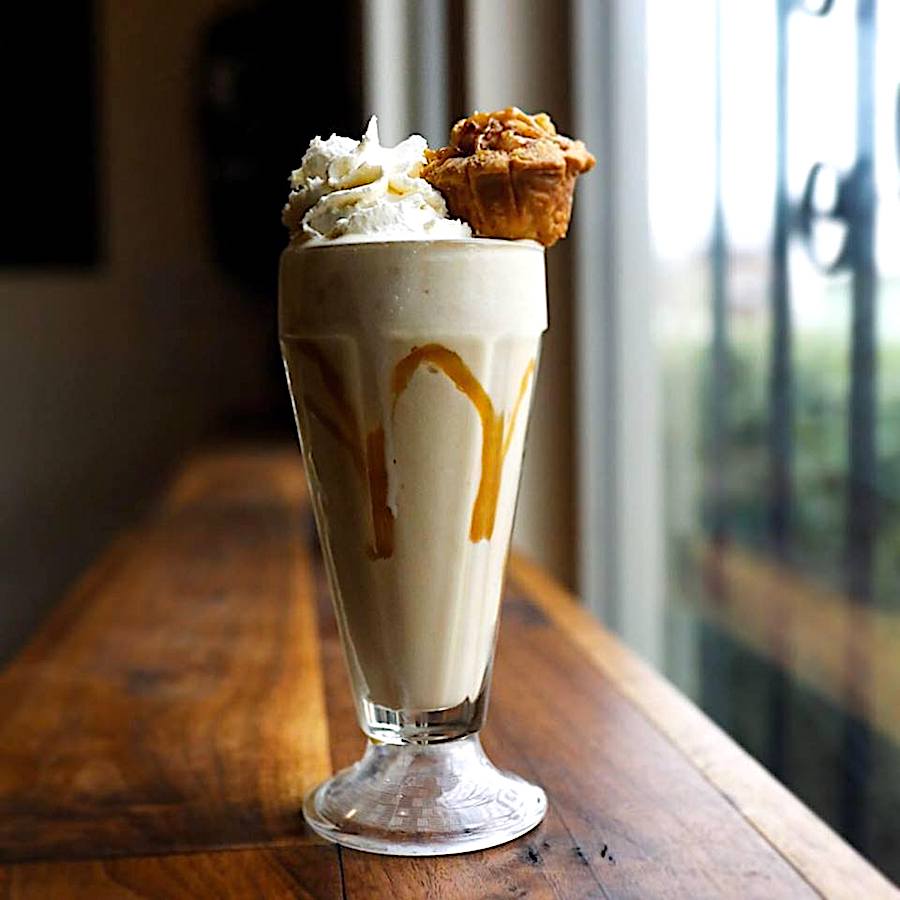 The idea of mixing the two will seem more like, “Ah, why isn’t this a thing everywhere?”

And it is, kind of, isn’t it? Albeit rarely?

Like, maybe somewhere in town offers a frozen version of a White Russian and they call it an Arctic Lebowski or whatever?

But that’s usually, at best, a miniscule part of a venue’s wider program of tipplage.

At Prohibition Creamery on East Seventh, though, that kind of taste orgasm is the main event. Although the main event … is also a double header.

Which, ah, knocks it outta the park?

Tell you what: Let’s ditch the awkward sports metaphors, Kyle, and just say what’s up.

We recently visited Prohibition Creamery, because they were doing a collab with the Garrison Brothers distillery and they sent us a preview invitation. And we’d already had them on our radar – and on our personal let’s-check-this-shit-out-SOON list – because, duh, ice cream and booze.

And we figured the occasion was going to be enjoyable, and we’re supposed to report on things, so off we went.

But we didn’t know that the place – which, btw, is beautifully appointed in a High Vintage-yet-Minimal style with a totally Instagrammable black-forward palette – the place showcases a separate bar program that could hold its own against other less creamy, more hardnosed establishments.

(Those Garrison Brothers knew exactly what they were doing, in other words, hooking up with Prohibition. As do the blue agave savants of Playa Real.)

Whether they’re doling out clean shots of amber brilliance or building some herb-infused potion that requires an upended snifter to keep the cocktail wreathed in smoke for at least (count ‘em) three minutes before imbibing, Robert Britto and his crew are the sort of alcohol wizards you’d want to deal with in a non-ice-cream setting. That they also work in tandem with dairy jockeys dishing up the thick cold stuff – in bowls, in cones, in shakes – well, that’s what the word “synergy” was coined for.

Speaking of synergy and collaboration, the Texas Brown Sugar Milkshake, already enhanced with the bourbon bounty of Garrison Bros and salted caramel, arrived with a tiny little pie – from Austin’s own Tiny Pies – sitting right there in the froth of whipped cream atop the tall concoction.

It’s often said that “too many cooks spoil the broth,” but here’s evidence that the right amount of cooks can take something that’s already perfect and make it just about fucking miraculous.

(Unless you don’t like pie, that is. Or ice cream. Or whiskey. You benighted fool.)

At this point in our visit we wanted to make sure that, unlike certain other decent places in the city, Prohibition Creamery is going to be around for a while. So that we could, you know, return – and bring friends and have a good ol’ time whenever we wanted.

So we asked owner Laura Aidan if we should be worried at all.

She assured us that business is good, that Prohibition is doing very well – “Even with, ugh, all the construction around here!” – and that she is, in fact, actively looking for property in which to open a second Prohibition Creamery venue.

She has a nice laugh, but it still hurt. Oh, the humanity.
So we took another sip of that Texas Brown Sugar to numb our pain.

Anyway, citizen, the upshot of our visit, and of this blogpost about it, is this: Prohibition Creamery is just as good as word-on-the-street may have led you to suspect, while being otherwise sublime in ways that you maybe hadn’t even considered. Their own elevator pitch – “We offer made-from-scratch boozy and non-boozy ice creams, sorbets, milkshakes and sundaes, plus signature cocktails, wine, and craft beer in a Prohibition-era bungalow” – only begins to cover it.

You run into us there sometime, say howdy: Journos with a little ice cream and booze in ’em are the friendliest journos of all.