If there’s one thing owner Jason Sabala wants Austin to know about Buzz Mill Coffee, it’s that he and his team are all about cultivating community.

The former Emo’s co-owner said, “If I had a billboard, or if I had the mic in front of the whole city for a second, I’d say, ‘We’re all about cultivating community.’ I want people to recognize us for that more than our infused liquors.” 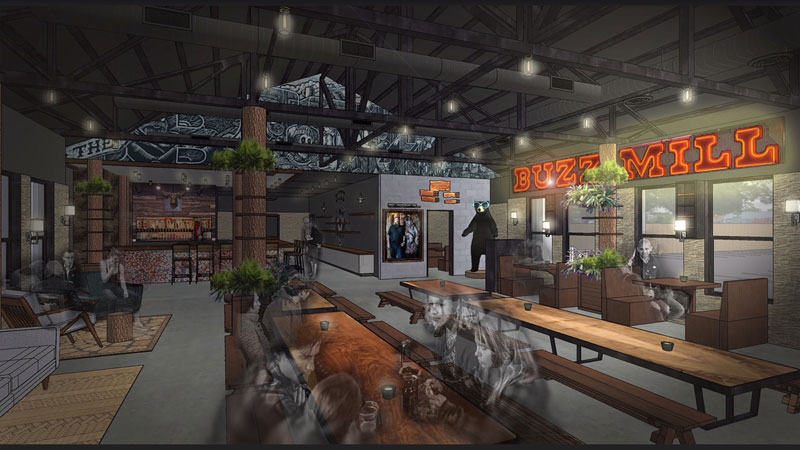 Buzz Mill’s new space (5012 E. 7th) – their third and largest in the fleet – is set to open in late spring or early summer 2019 near 7th Street and Shady Lane. Just like the other two locations – Riverside and San Marcos – it will stay open 24/7. There’s a whole acre “dedicated to community service and gathering of like-minded folks collaborating to have tremendous impact on our beloved city,” a Buzz Mill rep explained. “[We’ll] offer plenty of opportunities for people to have impactful ‘collisions’ where forces are joined to accomplish even more here locally.”

Dick Clark + Associates, the firm designing the new space, shared some insight into some of the new features: “DC+A designed the space to be a ‘mill for creativity,’ understanding that the essence of Buzz Mill is not just that it’s a business, but most of all, a community with a close relationship to Mother Nature. This is a former industrial building that currently serves as a bus terminal. The exterior design leaves the essence of the building’s industrial nature, and on the interior there is a central ‘main hall’ that acts as an open gathering space. The roof structure will be exposed and symbolic elements will become part of it, such as tree trunks, neon vintage signage, vegetation, art work of murals, big long wood trunk planks, community tables, and intimate booth configurations.”

In addition to coffee, alcohol, and live music, the Buzz Mill compound will feature three food trucks: Austin Rotisserie will be serving up charcuterie, baguette sandwiches, and cheese boards along with weekend brunch; and a new offshoot of Plow Burger (stationed at the Riverside Buzz Mill), Plow-B-Q, is going to be making plant-based barbecue – think smoked shrimp, sausage, wings, brisket, jalapeno poppers, and of course, their famous burgers with Beyond Meat patties. Maybe even more exciting, there’s a top secret barbecue installation in the works, with “a big name in the barbecue world” at the helm. (Stay tuned for more info on that exciting promise!) There are also plans in the works to become a sort of co-working space (like WeWork, etc) and have other groups come in to collaborate on community-driven ideas.

Buzz Mill’s soon-to-be next door neighbors, Infinite Monkey Theorem, just announced that they’ll be opening their urban winery in early Spring 2019. Among other ventures, IMT created a cider for Buzz Mill, called Camp Cider – cinnamon, apple, maple, pear. You don’t have to wait for the new spots to open to try the new brew, though. It's already available at Buzz Mill Riverside on draft, in cans at the IMT winery down South, and at the Houston Zoo.

Their new 11,000 square foot East Austin digs “will ultimately house all wine production from fermentation to barrel aging and bottling. It will also allow the winery to make up to 10,000 more bottled wine cases per year, including all of its 100% Texas varietals, as well as produce additional varietals,” said a Wednesday press release. The new Texas flagship will have an outside patio that connects to Buzz Mill and possibly other neighboring businesses. Infinite Monkey Theorem co-owner Aaron Berman said, “... in the near future, we are hopeful that our outdoor space and connectivity to neighboring businesses will allow Shady Lane to act as a hub for the community.” In an effort to facilitate community conversations, Sabala explained that in the back building of the new compound they’ll host whole animal dinners with table service. The still yet-to-be-announced barbecue guy will head up the menu, and Sabala will recruit guests by invite – “people on other sides of the fence, the river, the dam” – to have thoughtful conversations, “not political, but more like, ‘How do we push the needle forward?’ You can do that with education and food.”

That same building will also act as the headquarters for Buzz Mill’s Lumber Society, which specializes in education classes that encourage more engagement with the outdoors through primitive cooking lessons, knife skills, navigating techniques, and more.

A Buzz Mill rep explained, “Roughly 87% of America hasn't gone camping or participated in nature. To us, that is wild! We want to offer people an avenue to get their dose of nature in hopes it inspires them to embrace their community and Mother Earth more. Our Lumber Society is like Boy/Girl Scouts for adults that offers classes, workshops, games, and camping trips. We care about the outdoors, but also know that everyone ‘logs out’ differently. Some folks want to talk over coffee, beer, or attend a market – or even take in a comedy show. We essentially want you to log out and tune in to your community. This can be seen as a calling for you to get off your phone or computer. Hey, we understand you can have a community online too … but maybe sit outside on the patio, enjoy the fresh air, and pet a dog while you’re at it.”

Whether you’re on a first date, need a late night barbecue snack after a show, want to work on your novel on a patio with a beer and a cigarette, or don’t drink but love coffee and Topo Chico, Sabala says there’s a place for you at his establishment. He added, “We’re trying to be number one – the biggest education platform and community center that also happens to offer good things to eat and drink.”