The 12 Bars of Christmas

With Christmas only 12 days away, we wanted to gift you, our loyal readers, with a grown up advent calendar: the 12 Bars of Christmas! Rather than extraneous birds (does anyone really have space for both a partridge and a pear tree in their garden these days?), gift your true love with the real reason for the season – a chance to put on something sparkly, escape from visiting relatives (or bring ‘em if they’re fun!), and rock the night away with something sugary and alcoholic until even the ugliest Christmas sweater starts to look pretty good.

It’s been Christmas for 365 days every year at Lala’s Little Nugget, where Santa and his reindeer have been perched on the roof since 1972. There’s no better way to kick off Christmas drinking season than with their Santa’s Irish Coffee – a mix of Tullamore Dew Irish Whiskey, cold brew coffee, topped with Irish crème. Or stop off on a weekend for one of their famous Bloody Mary Mornin’s, every Saturday and Sunday for a little hair of the dog that bit you.

In a genius place of marketing for a city that likes to keep it cozy even during what the rest of the country considers tropical Christmas climate, Craftsman is offering a special all December deal. On days when the weather drops under 50 degrees, guests get 50% off warm drinks. There’s hot cocoa spiked with peppermint schnapps and topped with homemade whipped cream; hot buttered rum with vanilla ice cream, brown sugar, cinnamon, and nutmeg; and Scottish tea time, Earl Gray spiked with whiskey and sweetened with simple syrup and lemon juice. All month long, Whister’s is running a menu of special holiday drinks benefitting Toys for Tots, with a portion of the proceeds from each festive cocktail going to the charity. The menu includes Oaxacan hot chocolate, their cayenne-spiked house Mexican hot chocolate recipe, topped with fresh whip cream and a cookie, and spiked with Grand Marnier and El Silencio mezcal. There’s also Mama's Eggnog, a traditional eggnog recipe that the team at Whistler’s says has been passed down for generations, and the Mr. Kringle, a boozy mix of Wild Turkey bourbon, Amaro, vermouth, and maple syrup.

East Austin neighborhood kickback spot Nickel City is hosting a tiki-themed holiday party for Christmas this year. Santa’s on vacation, they say, and to honor the big man’s well deserved time off the folks behind the bar have dreamed up festive tropical themed drinks like the Kris Kringle Colada and the Hawaiian Milk punch. Plus, every weekend in December, they’ll be holding a rockin’ Christmas luau. For the price of a $40 ticket, you get two Christmas cocktails, a pupu platter, kids tiki drinks, and a photo with Santa. Apparently the man likes a working vacation.

Five Miracles on 5th Street at The Eleanor

For the second year in a row, The Eleanor is pairing up with Cocktail Kingdom to host their rollicking Miracle on 5th Street popup. There’s a menu of cocktails inspired by classic holiday drinks and dishes, and a suggested festive dress code of ugly sweaters, plaid pajamas and onesies for guests to wear as they explore the themed rooms, including a ski lodge dance floor, a nostalgic Christmas morning living room, and a mountain summit on the mezzanine. Santa hats, of course, are de rigueur.

Six Weeks of Eggnog at Péché

Each week from November 25th to January 6th, Péché is running a Six Weeks of Eggnog special, featuring a rotating seasonal nog, each created by a different member of Péché's bar staff. The series kicked off with a spin on the classic made with Sacred Bonded brandy, Pama pomegranate liqueur, hibiscus, cinnamon, cream, and whole egg, and every week the flavors rotate. Try ‘em all and try to pick a favorite!

From Wednesday, December 19 to Saturday, December 22, Geraldine’s will transform its fourth floor pool deck into a life-size snow globe, complete with a snow machine and a disco ball throwing flakes of bright light across the room. The festive winter wonderland will feature marshmallows for roasting and holiday cocktails for toasting alongside a menu curated by head pastry chef Yolanda Diaz and bar director Caitlyn Jackson, with live vinyl DJing by Janice Bond, spinning holiday favorites and forgotten classics before live music kicks off on the indoor stage.

At this point you’re probably ready to kick it down a couple notches and have a slightly more low key holiday evening. Why not warm up at La Volpe, where the velvet-lined benches and dark draped fabrics create a cozy den all year round and where, for the month of December and beyond, they’re featuring a special winter menu of hot cocktails. There’s a spiced chai hot toddy spiked with Elijah Craig and warm chai spices, an espresso hot chocolate enriched with the lethal combination of caffeine and Bailey's, and an Italian coffee with Disaronno amaretto. 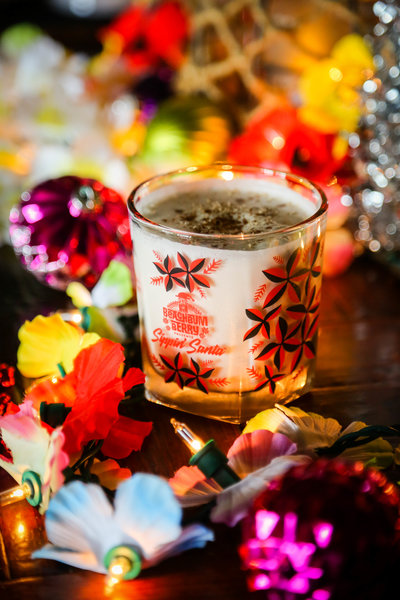 Nine Sneaky Grinches at the W

If you’re really burned out on Christmas cheer, the W Austin has transformed their Secret bar into the Who-Tel Bar, a Grinchmas-themed take-over that turns the space into a scene right out of Dr. Seuss’s Whoville. There will be a special cocktail menu including the Grinch Nog, a house made nitro eggnog spiked with Courvoisier VSOP and turned that signature Grinch green with matcha powder; a cheerful Who-tini made with Ketel Orange & Peach Blossom Vodka, prickly pear, Jumex Plum Nectar, lemon juice, and agave; and the Mount Crumpit, a mound of shaved ice covered in Bulleit Bourbon and candy cane syrup; and, of course, their adult hot chocolate, Max’s Reindeer Cocoa. Go ahead and put your hair up in Cindy Lou braids. You can totally pull it off.

Stopping by the Trail of Lights in Zilker Park is a non-negotiable part of any festively-minded Austinite’s holiday experience, and this year Carpenters Hall’s Hot L Coffee is providing the perfect stopping point to cozy up with a hot holiday beverage on your trek toward the Trail. Grownups can sip on a spiked peppermint cocoa, hot buttered rum, classic hot toddy, spiked eggnog, or a classic spiked cider, most of which are available in non-alcoholic iterations so the little ones can also warm up their walks.

Give your liver a rest while participating in a beloved holiday tradition second only to the Trail of Lights itself, each year Mozart’s transforms its lakeside patio to a shining holiday light spectacular, with over one million LED Christmas lights blinking along to their favorite holiday tunes. Admission is free, and seating is unassigned, so get their early to snag a prime spot as you sip your special mocha, nibble on a warm cinnamon roll, and enjoy live choir music and dancing on their outdoor stage. And if you wanna sneak in a flask of whiskey, well, we won’t tell on you.

You gotta go big for your ultimate night of Christmas drinking, and Gibson Street Bar is the place to do it. All month long they’ve decked the halls and hung the mistletoe for the first ever Gibson Wonderland. There will be bountifully over-the-top decor, including an Insta-worthy sleigh photo-op for your Merry Christmas posts, and a menu of specialty libations like the Santa’s Little Cider, made from Flor de Cana 7-year, lemon, and brown sugar. Also available is the Hot Apple Cider with nutmeg and apple bitters as well as the Loco Cocoa with 360 Double Chocolate vodka, Ancho Reyes chili liqueur, Mexican hot cocoa, whipped cream, chocolate, cayenne, and cinnamon. The list goes on with a Rum-Pa-Pa-Pum with Sailor Jerry spiced rum and the Ho-Ho-Hot Toddy with Maker's Mark. The Misfit Toys are in residence every Wednesday for some festive musical accompaniment.